The time is going faster as time goes by.  Even Michael is noticing.

I always tell people that I have about a year left of my mission, but my companion keeps pointing out that I don't have a year left. I'm down to SEVEN MONTHS. How the charcoal did that happen?? 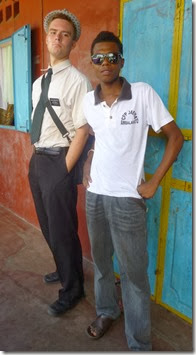 I worked out a little math today, and that means there are only FIVE transfers left! That's way too short a time. I took some comfort in the fact that there's still 30 weeks, but still. The end of my "dash" is flying in fast.

And that's why we always try to work in the present. I've recently started a plan to listen to every talk that President Thomas S. Monson has given in general conference from beginning to end (can you believe that he's been talking in general conference since 1971? O-L-D!). In the mornings and nights when there is a little free time, what better to listen to than talks from the prophet? Anyway, he mentions a few times about the importance of living in the present, so that we won't have to look back on "empty yesterdays". Now there's a thought.

Elder Rakotonjanahary and I were teaching an investigator when the investigator's friend, who was sitting in on the lesson, asked if they could hear more about our church. Wow, there's a question we would love to hear more often. So we came back later and taught her yesterday. Apparently her parents are totally against learning from us, but she is already married, so we're going to try to get her husband to start learning too.

This lady is Muslim, and knows the Bible really well. We started by asking if she had any questions for us. And she did. The lesson continued on for an hour and a half, and I must say, I dominated teaching during that time. Of course, the Holy Ghost is the real teacher; but I gave Him one darn good companion.

The lady started by asking about changes between the Old and New Testaments. I answered by showing her verses in the Book of Mormon that explain that the Law of Moses was just a lower law in the first place, and was destined to change (thank you Abinadi!). 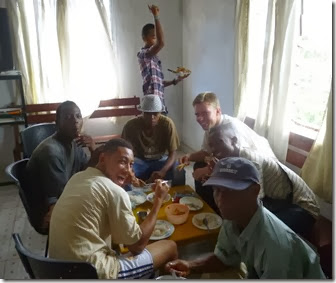 Then she asked how the commandments could change since God doesn't change. We explained that He does not change His purpose: our salvation. Sometimes, the different situations and different people require that He change His commandments, but He is always the same.

The lady wasn't too sure about that, until we asked her what God's law was before the Law of Moses. There's a stumper for people. She understood after that.

Then she started asking about living prophets, suggesting that there should be a prophet, and only one, living today. What a breath of fresh air that was from the people that "follow the Bible", and yet think that a room of babbling people "speaking in tongues" is a room full of prophets (for Paul's thoughts on the gift of tongues, see 1 Corinthians 14. And then repent.). The lady also mentioned that there is a verse in Isaiah that talks about a prophet that will be given a book, but say that he can't read the book, because he can't read. My companion and I looked at each other and mouthed, "Joseph Smith?" We ended the lesson by giving the lady a First pamphlet to read before the next lesson.

That was an awesome lesson. An investigator that focused on us and asked good questions, and actually accepted the answers given. Of course it wasn't just me that did so well teaching. My companion was doing great, and so was the 13 year old member that was with us (and he is a STUD).

Probably the only person in the room that did NOT do well teaching was a member, the mother of the original investigator, who walked in halfway through the lesson and decided to take over our jobs. When SHE opened her mouth everything turned into yelling, debating and Bible-bashing, until my companion and I quieted them down and taught peacefully. It was a really cool contrast.

On the other hand, we taught another family that just would not understand. We got stuck talking about baptism with them. We explained about the authority that is needed, the importance of the authority, how it is given, etc. So then we asked a super difficult question.

Where is that authority? (remember that this family claimed to understand the Restoration since before I got here). And they said, "in the LDS church and the Catholic church".

Aaaaand a swing and a miss.

We tried asking them how they understood the Restoration, and according to them:

Joseph Smith was looking for the truth and God's church. He prayed really hard, and was blessed. Then he found the true church, and it was named the LDS church.

Even if that were the truth, wouldn't that make this church the ONLY one that God accepts? Why would God have more than one true church?

After that they hit a few foul balls, before hitting a dribbler to the pitcher and getting tagged out at first base to end the inning.

Back on the upside, we saw a dog today. A REAL dog. Not the kind that tries to kill you, but the kind that has been trained well and is super friendly and just awesome. Like an American dog. His owner got him to sit, lie down, and do a couple other tricks with almost zero problems, and the pooch walked up to me and just slobbered on my arm (he drooled as much as Parker apparently does), until he started playfully biting my hand. I was still scared that he would eat me, so I rubbed his belly. He was also HUMONGOUS. Random, I know, but it pretty much made my day.

So that's pretty much been my week. We'll be going to the church later today to teach piano lessons to anybody that comes (hopefully, myself), and then it's out to work. Not much change in the missionary life.

But life in America seems to be as lively as ever. It seems that missionaries are now spilling into Brazil faster than visas can be written, and America is getting the excess. Cool!

Stay busy everybody, and live in the present!

PS: Mom, I loved your story about the "Family Bridge" dinner, and Steven's comment. Cracks me up.