Another very entertaining letter this week!

Some people wrestle with crocodiles. Some go sky diving. But if you really want some adrenaline pumping action, get a Malagasy haircut.

They do a pretty good job, considering that they have no professional training. They just have some sketchy ways of going about it. This guy that cut my hair today, for instance, decided to taper my hair down by sticking a razor blade on a comb and rubbed the comb on my head. They also love using razors (and I mean exacto-blade kind of razors) to carve out around the ears. I found myself praying very hard that his hands wouldn't slip. But I survived. 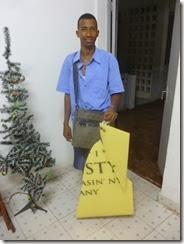 That's one of the cool things about Madagascar. The people do super ghetto stuff, but pull it off super well.

But enough of that. I've been working on learning the Malagasy dialect of Mahajanga, which I would say is like Madagascar's "South". People say things here that, if said in English, would be way black. For instance, instead of saying "aiza ianao?" (where are you?) they'll cut out part of the word and say, "aia nao?" (whe' you at?). So that's been pretty sweet.

Also, I've been getting better at playing hymns in Sacrament meeting. They let me choose the songs, so I give them the numbers before the meeting, and I do okay since I've been able to practice the songs before actually performing them. But I still make mistakes.

Yesterday, for example, I made it to the closing hymn, "Count Your Blessings," which I felt pretty comfortable with. So after the conductor stood up, I started into the introduction... to "How Firm a Foundation". Yup. I played the wrong song. It turns out that I had given them the wrong hymn number. So we had a nice awkward pause while everyone stared at me and I looked back like, "what?" Still, they handled everything pretty well, we sang "How Firm a Foundation" and moved on.

So you live and you learn. I also had a cool experience from my studies this last week. I had been flipping through D+C looking for a certain scripture when I found one that talked about Christ going to the Spirit World. I remembered having talked with some other missionaries about it, whether or not Jesus had come to the Spirit Prison. According to D+C, He did not, because He COULD not.

A couple of days later, we were talking to Ulrish, a recent convert, when he asked us about that very question. Some other members told him that Christ had not gone to the Spirit Prison, but didn't tell him why. I unsheathed my scriptures and joyfully shouted, "D+C 138:35-37!"

Sometimes you learn things when you don't mean to, but they pay off later on. There's a sacrament talk somewhere in there.

Two more stories. We were teaching this one family one day, but they kept interrupting the lesson to tell their kids to leave. We would be in the middle of bearing testimony of the Book of Mormon or something when the mom would stand up and yell at her kids in the next room, which had opened the door, to "go away and shut up! We're praying in here!" 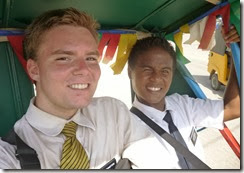 Good job lady. That's exactly what church and praying is about. I finally stopped the lesson, after an older sibling started shaking a fist at the kids, and I told them to stop. If they want to learn the gospel, then they can't be yelling at their kids like that. It distracts from the lesson, it sends the Holy Ghost fleeing, and, quite simply, it's not what Jesus would do.

They apologized and agreed that they shouldn't be doing it. And every time we go there now, they don't yell at their kids. How about that?

Last story. Do you remember Blaze from last week's email? He dropped talked himself this week. Badly.

He sat us down and said, "look guys. I don't want to lie to you. I've been thinking a lot about how to break the news to you, and I just don't have time to read".

Right. Because that is ever a reasonable excuse. I asked him how much time he had spent thinking about how to tell us that, and he said "a long time". 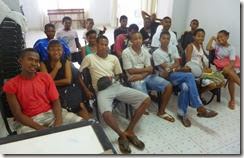 So instead of planning how to say that you didn't read, why didn't you just... read?

And he said that he doesn't have time, and he doesn't want to waste our by making us come back. I focused on staying very calm during most of the talk, mainly to keep myself from strangling the guy. It's just such a stupid excuse!!

But we left nicely, and now there is a Book of Mormon in his house, so maybe one day he'll just decide to dive into it. It's happened before, right?

And that was my week. But it sounds like everybody else has been quite busy as well. Very busy indeed.

As for everybody's Christmas packages, I have gotten the ones from mom and Stacey. Actually, Stacey's made it here almost by Thanksgiving, so no worries there at all. We downed that candy like nobody's business.

And Mom, it looks like everything in the picture got here, except for the pajama shirt and snowman thing. Interesting choices.

Julie, it sounds like James had a fun time in the tumbling class. Have you considered signing him up for gymnastics? Then you and Stacey could have "Dancing Darci and Gymnastics James". The alliteration alone makes it worth it.

I think I'm starting to babble again, so that's probably all for today. Have a great week everybody!

PS: Stacey, I have not gotten the actual Christmas card yet, but I have seen the picture. I printed it out and show it to people that we teach, to see if they can find me. And they love it.

I forgot to explain this week's pictures, so here you go:

- The plaque at our church that reads "the Church of Jesus Christ of Latter-Day Saints" got blown down by a strong wind, and shattered. Ulrish, one of my favorite recent converts ever, is holding a few of the pieces.

- There is this kid that hangs around the hotely that we eat lunch at. He's the son of the owner. I call him Mogley, because he reminds me of the kid from the Jungle Book. He's much more smiley and awesome than he looks in the picture, but he froze in the middle of dancing when I pulled out my camera.

- Elder Rakotonjanahary and I rode a pousse-pousse on the way to a lesson, finally, and I snapped a picture. I'll have to get a picture of an entire pousse-pousse sometime. By the way, aren't pousse-pousses food from El Salvador?

- We had a ton of people come to English class this last Saturday. More than I have had ever before. It's getting difficult to teach them all, since everybody just wants to have a conversation with me. But they are all really good at English, and great students.