As we start the new year and enjoying winter, things are heating up in Mahajunga!

Subject:  “You will join me for dinner.  That’s not a request!”

So we've been teaching this guy named Blaze for a while. When I first heard his name I was like, "this guy is going to be AWESOME". He now seems to be trying to prove me wrong.

We had given him some chapters to read in the Book of Mormon, and he didn't. He said that his eyes are really bad and his glasses are broken. Okay, decent excuse. So we set up a plan with him so that he could have one of his kids read to him, and he would listen. 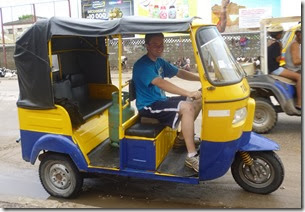 We stopped by before our actual appointment and asked Blaze how things were going and if he had read. He said yes. Awesome!

Then we came for the actual appointment, and he said that he has not read at all. What the heck?

He still claimed that there was NO WAY he could have read. When we asked him why he didn't just follow the plan that we had set with him, he said that he doesn't want to bother his kids. Boy, you are SUPPOSED to read the Book of Mormon with the family!

Anyway, Blaze had also, after three weeks, fixed his glasses. How did he solve it? Super glue. It took the guy THREE WEEKS to think of SUPER GLUE. I even asked him why he hadn't tried harder to find a solution for that, and he said that he had been super busy. Apparently "busy" is Malagasy for "sitting outside your house and staring at the wall," because that's all he's been doing every time that we stop by his house.

But the worst part was what he said to us about religion in general. He said, "the only real difference between my church (Catholic) and yours, is that I believe in praying in the morning and at night and then not worrying about God throughout the day, and you guys think that we're supposed to pray all day."

I felt like Brian Regan's act about "point/counter-point about reading". All I could think of was, "I'd like to yield the remainder of my time to my opponent."

We tried to explain to him that that is exactly what the gospel is supposed to be. It doesn't mean that you stop life, kneel down and pray 24/7, but the gospel is a way of living life. It is instructions on how to be a good person and how to inherit the kingdom of God.

But Blaze just wanted to separate God out, and keep everything in their own hemispheres. We're still working with him, but if he doesn't start progressing then there is a drop talk looming on the horizon.

Other than that, things are still going really good. We have a few investigators that are progressing really well, possibly my favorite one being this guy named Donna. He's just really diligent at reading and now will be able to attend church, starting this coming Sunday. Awesome!

Oh, I forgot to mention, we actually DID find one new family, that could progress well. The parents are named Edmund and Nirine, and they seem like they will be diligent. My only problem with them (and pretty much everybody in the world right now) is that they yell at their children. It's the worst.

Especially when you're in the middle of a lesson and the kid knocks a bowl over or something, and they FREAK OUT. And there goes the Spirit. No Spirit, no love in the family. But that's why we give them the gospel!

Honestly, even if you take out the eternal benefits of living the gospel (you know, that whole "eternal life" thing), following the principles that our church teaches just makes you happier in life. I've been watching a few of those "I'm a Mormon" videos recently, and basically everybody mentions that living the gospel of Jesus Christ helps them find greater meaning in life, and it helps them get through the tough times that they face. Why wouldn't you want that?

This probably just sounds like a bunch of random babbling (which it is), but there is a quote in the Book of Mormon itself that says it better than me. I think it's Nephi who says something to the effect of, "those that believe in the Bible will believe in this book." Interesting.

Also interesting, but in a completely different way, I saw a funny billboard today. It was an advertisement for some fancy, French milk, branded "Leo". It was funny because, in Malagasy, leo means bored. So I was like, "it's boring milk!" It made me laugh. But maybe you had to be there.

So that's basically been my week in a nutshell. Our mission ran out of Daily Planners in English, Malagasy, and even French, so I've been using a notebook this last week. So no worries there.

Anyway, keep being awesome everybody.

PS. I just wanted to add a picture that we took. There are tons of these little three wheeled taxis that we get to take all the time, and we had a chance to take a picture with one today. Fun.