I love to hear about how the work is going—and it sounds like it is going quite well!  I believe Michael is having some great experiences with investigators.  And with spiders.  And chameleons.

Subject:  "To think, one inch lower, and that arrow would have..."

Clearly, it's been another week. Lindsay mentioned this, and I thought it was kind of crazy: I've been in Madagascar for a month. Add that to my MTC stay, and I'm already THREE months into the mission! It just doesn't seem like that. It's weird, because I feel like I've been here forever, but it still flies by super fast.

Part of that is that we stay way busy. We teach a lot. Add that to four hours of study in the morning (personal, companionship, language, and Twelve Week Program stuff), and there's never a dull moment. Some of the people we teach are progressing awesomely, while a few others need a little more help. 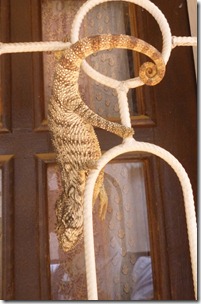 This last week we had probably our third lesson with this guy named Hery (Harry). His wife is a member, along with pretty much all of her family, which they live with. Think of an apartment complex about the size of a college apartment, add in some stairs that will probably break as soon as the big white guy steps on them and like 20 people, and you've pretty much got it. It's just an awesome place. Anyway, we had given Hery a Book of Mormon in the last lesson, along with the assignment to read Moroni 10. We show up this last time, start with a prayer, and ask if he has any questions. He pulls out the Book of Mormon, opens up to Moroni, and starts running down the chapter. We peek over and see that he's underlined a bunch of verses that he had questions about, and asks us to clarify them. In a country where a lot of people either don't know how to read or their eyes are really bad and don't have glasses, this was kind of a new thing for us. So we go through, answer a bunch of questions about why children don't need to be baptized, what gifts of the Spirit are, just some great stuff. This guy is on the right path.

And in regards to people that are awesome at learning, I think I told you all about Georgiette. She just got baptized a couple weeks ago and is still super diligent. Unfortunately, her family hadn't shown up to support her, which got Elder Landon and I pretty mad. A couple days ago, Elder Landon asked them about why they hadn't been there (all in good humor of course). They answered that they hadn't known. GEORGIETTE HADN'T TOLD THEM SHE WAS GETTING BAPTIZED. There's a new angle. It turns out she had been afraid that they wouldn't support her, so she didn't tell them. 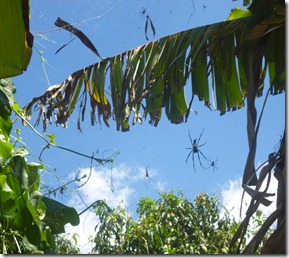 Then one day later, someone in her family was flipping through her Book of Mormon, and found pictures of her baptism. Gahh! That's what they said. Gahh. So we all had a good chuckle about that.

In the same lesson that we learned about that, we had been talking about bananas and how awesome they are. They said Americans eat them weird, and I held my hand up to show how we do it in 'merica, and say, "Izahay mihinina akoho ohatra-izao". Meaning "this is the way we eat chickens". They said I looked like some barbarian. And laughed some more. Good times.

On the note of the language, I've learned that Malagasy might be more correct than English in some ways. For instance, in my ever persistent studies, I learned that the word for spider is "hala". Which is also the word for hatred. See the connection? Also, we were walking around and saw a bunch of spiders chillin' in they webs, so I took a picture. Pretty much every little dot you see is a spider. And the big ones were bigger than my hand.

You'll also find pictures of some stairs, which you can't really see in the picture, but they were just about the worst stairs that have ever existed. Some of the steps you had to jump up to or down from, and they are always uneven. Always an adventure. Another shot is of some lady sleeping on a window sill. We're not really sure why she was there, but it was kind of awesome, so there you go. And there's a picture of a chameleon. Elder Randall had found him outside our house and decided to put it on our window. So there you can see it clinging for life to the window bars.

Fun side note about chameleons: they are awesome climbers. They move really slow, but they're really strong. And their feet are weird.

Speaking of feet, Lindsay asked about what people do here for work. A lot of people just carry bricks around on these rickety old carts. I'm not really sure where they go or what the end goal is there, but that's what they do. I mention feet because a lot of them don't wear shoes, so their feet get really messed up. We saw one guy a couple days ago whose feet were apparently really dry, and he had a crack in his heel about half an inch wide. Which was rather odd. 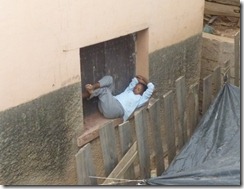 A lot of other people run little stands where you can buy soda and candy or notebooks and stuff. And fruit. And bread. Basically each of these little shops sells just about everything you could want. It's really cool. And of course the farmers do their thing. I'm not really sure what their thing is right now, but they seem to stay busy.

I've mentioned in earlier emails that it's super annoying how people always assume we missionaries are French. But now I've found the bright side. Since the only French they know is "Bonjour" and sometimes "au revoir", they assume that anything this "French white guy" says is French. So no matter whether I'm speaking English, the three or four French words I know, or complete gibberish, they think I'm speaking perfect French. So if any Malagasy asks, I'm officially fluent in two languages. And learning Malagasy. So that's cool.

On kind of a final note, those of you that email me and are not family, THANK YOU! It's great to get emails from a bunch of people. Just know that I can only email family members, so I'll try to send off some paper mail. Although they say the mail could take anywhere between two weeks and two months to arrive, so... yeah. But be ready for it. 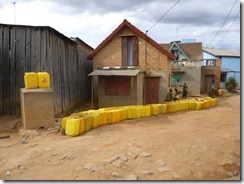 Everyone, just keep the good word coming. It's great to hear how everyone is doing. Keep working hard, and know that God loves you all.

PS. The rest of the pictures, along with one of some water jugs lined up to get water. I don't think I've seen running water in any house but the missionary ones, so there's a communal pump for people to fill these water jug things. Enjoy!