Sewing.  Sew like the wind!  That would be a reference to the movie Three Amigos which is a family favorite here.  That being said, I’m still not sure what the reference means here.  Ah, missionary speak.

Still, we have some great pictures, some descriptions of the quality of life, and news of a baptism!  That’s a good week.

Subject:  "It is no concern of mine whether or not your family has... what was it again?" 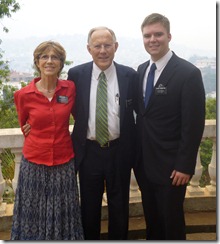 First off, I've had a couple people ask if there are houses that are all tiny and broken down, but still have a satellite or something poking out. In short, no. I don't think I've seen any satellites (except on super rich houses) since I came here. It usually comes down to a choice between TV or food for about a month. They prioritize.

But yes, so it's been another week. I decided to make a few notes about my week, so hopefully I'll have a little more info this time.

For one, I mentioned those super rich houses. Here in Madagascar, a "super rich" house is usually one that has paint on it. You know they're loaded then. There's a couple other things about them that are kind of giveaways too. Like having glass windows, or barbed wire on their fence. EVERYBODY has metal bars over their windows (a country of poor people is a breeding ground for thieves). But yeah, most people 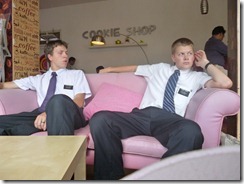 just have a curtain on their window. No glass. Which is actually pretty nice, since you don't have to worry about opening it to get a breeze. And then there's broken glass on pretty much every wall you'll find here, also to discourage thieves. They either cement in broken chunks of their bottles, or if their super rich, they set up razor wire. We don't climb a lot of walls in this mission.

But we do climb a lot of stairs. The streets here are rather... shall we say, poorly planned. Meaning not planned at all. We have to go up and down a lot of stairs too, which is pretty fun. Sometimes the spaces between the houses get so narrow that we have to take our backpacks off and try to squeeze through sideways. It's been pretty fun. 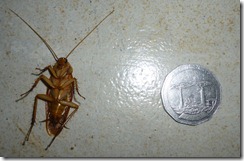 Dad, you also sent me a picture of Ambohimanarina from space. Sorry, but I really have no idea what it looks like from up there. I can tell you that the bricks down here can crumble in your hands, and that the people can't afford brakes for their hand drawn carts so they tie a broken piece of a tire to it and stand on that to slow it down, but I don't know what Madagascar looks like from above. Yet.

Speaking of which, I saw a family moving the other day. They had one little cart (remember the pioneer trek?) with one mattress and maybe a chair, and a bit of food. They just up and left. It was pretty interesting. Not to mention that they looked like a much poorer version of the cast from the Fresh Prince of Bel-Air. Like a lot of people around here. 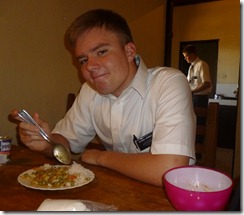 So we had a zone meeting last week, and I saw another Malagasy elder. I'm living with one, so I figured they would talk a lot. But the guy I live with didn't even bother. So I got curious, and went over to talk to this new guy. It turns out he's not from Madagascar, but from America. Oregon. Beaverton West Stake. So that was a bit surprising. He was pretty awesome too. So that's good.

*subject change* There is in fact a new program out there to help new missionaries get used to the mission field for the first 12 weeks. It's cleverly called 'the 12 Week Program'. Basically it just forces the greenie to start doing stuff more. Like teaching lessons. 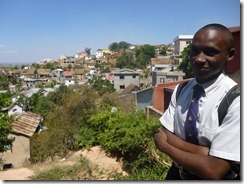 The last two or three lessons of yesterday, we went in, talked with the people for a second, and my trainer turns to me and says, "oh by the way, you're teaching this one". Um... what? You couldn't have told me this like two weeks ago?? Oh well. I actually did pretty well, all things considered.

Another common thing around here is for the power to go out. Back in the days of America when the power went out I'd have no idea what to do. Did someone just turn off the lights? Why can't I see the classical novel that I read so oft? (usually Pride and Prejudice, or the Art of War. I never could tell the difference between those. Oh snap.) But here in Madagascar, it's like oh, the power's out again. Whoopedy-doo. Candle time. It was pretty funny actually a couple days ago. The power was out and we had to do our nightly planning session, and flashlights made everything seem really creepy. So we pulled out some candles and planned like none other. Elder Landon agrees that it was by far the most romantic planning session we've had yet.

On an entirely unrelated note, some of you may recall that all white people in Madagascar are thought to be stuck up French people. There's the oxymoron of the day (oh snap again). But yeah, so we were waiting for a bus, and this guy starts talking to us. In French. We (meaning Elder Landon, not me) responded in Malagasy. The guy was like, "whoa! You're learning Malagasy? I guess you're not just stuck up French fries". Oh, we're not stuck up? If only we had known this earlier. Sewing.

Just in case it was unclear at first. 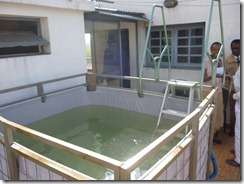 Also, I officially have fleas. That's a nice feeling. Not. For those of you who haven't had fleas, imagine a mosquito that's stuck in your clothes all day and all night. I've been trying to count the bites I've gotten so far, and I think I'm somewhere around 20 or 30. On each leg. And each arm. Add to that that flea bites take forever to go away, and it's been a very itchy first two and a half weeks.

Much more happily, we had a baptism service two days ago! I think I included a couple very unorganized pictures of that in the server for this week. There's one of the font, just to show h

ow ghetto the thing is, and how green the water is. There's one of the ground, because the font was leaking and nobody could figure out how to fix it. And there's one of Elder Landon and I with the baptizees. The girl is named Georgiette. She's been learning for a really long time, but she's super diligent, always follows through on commitments and attends church. She's awesome. Finally she agreed that she needs to stop putting off the day of her repentance (she had been waiting for permission from her dad, who had been out of town forever). Anyway, she decided to be baptized, and none of her family even showed up. 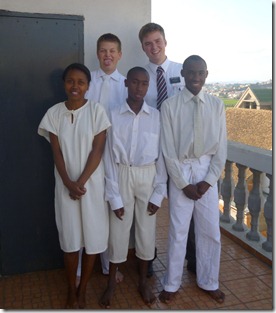 Her dad was back in town, her mom stayed at home, and her sister (who had also learned a little bit) just didn't come. Not sure what the story is there. But Georgiette is awesome. The little guy is named Patrick, and the slightly older Malagasy is Leonce. Leonce is the member that we take with us probably 95 percent of the time for our lessons (he's probably been with us like 14 of the 16 or 17 days I've been here). Patrick is his little brother, about 15 years old, and Leonce gets to baptize him. That was pretty awesome.

By the way, Elder Landon performed the baptism for Georgiette. Good man.

Anyway, I really need to go now. Keep working hard everyone, and email back soon! (don't procrastinate the day of your emailing)