Still sick!  But it sounds like he’s getting better.  We’ll keep him in our prayers.  The baptism picture is from this week’s email.

Subject:  It makes me feel happy, which is a big deal for me.

What a week. So much stuff happened, I don't even know where to begin. Maybe I'll start with last Monday. Remember how I was feeling kind of sick? Yeah, that didn't change the entire week. So I couldn't work the entire week. And that was it.

You know, that was a lot easier to sum up than I thought it would be. I'll try and come up with some more details, though.

So Monday I got a fever of 102.something, and it made me feel horrible. It stuck with me all day Tuesday, too, and that combined with a terrible headache and full body ache meant that I wasn't fit to work. I slept most of the day. Except I also did go to the hospital clinic place to get a blood test done to make sure that I didn't have dengue again. It wasn't conclusive, so Wednesday morning, after going to and teaching a district meeting (longest three hours of my life), I went and got another one. This one told me that I probably didn't have dengue, but I definitely did have some kind of infection. Also about this time I got super congested and my throat was hurting super bad. I almost couldn't swallow, let alone talk. So I was very silent. The nurse had me go buy some Panadol and that helped for a little bit, but then it stopped helping. Friday we had a multizone in Sonzacate, and President noticed that I was half dead I guess. He had me call Hermana Cordon, who assigned me some kind of antibiotic that I had to take. So I took it. I still didn't feel better the next day, although my temperature had finally gone down (after five days), so Elder Norene, one of my zone leaders, went with me to Santa Ana to have a doctor look at me. It took a couple hours to get down there since Sonsonate is in the middle of some festival, but we finally made it. And the doctor's office had already closed. So we ate some chicken (which was the first thing I think I ate in that six day period), and then headed back to Sonsonate. And we pretty much just rested the rest of the day. Sunday I was feeling a little bit better, and today I'm even better, but I have absolutely no energy whatsoever. I basically have to take a break halfway up some of these hills because I just can't handle it right now. I feel lame. But what's worse is that I have a cough that's getting worse, and I can feel the mucus or whatever in my lungs. It hurts. So that's the long version of the story nobody cared about. Fun stuff, huh?

Fun fact: Elder Norene got sick from something the day he was with me. He's now in the hospital in Santa Ana. Is that my fault? I hope not. 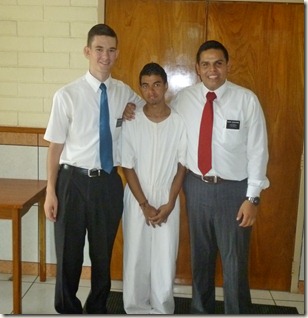 Also, that was a really long paragraph. And it took a while to write. I'm surprised.
The silver lining to the week, though, is that we got the baptism that we had planned! It was this kid named Mauricio, who's 21. While I went to Santa Ana, Elder Hernandez stayed here with Elder Diaz, the other ZL, to do his interview. We got him to church on Sunday, and immediately after we baptized him. Well, we had a member do it, but I'll attach a picture anyway. He's a fun kid, and he pretty much knew all of the commandments and everything before we started teaching him, so it wasn't terribly hard, but there it is.

I'm sending the baptismal picture here in the email, but I'll be uploading a lot more via un miembro to the actual server, I think. I just don't like having to do it here on this Linux machine. So I'll wait until I've got Internet Explorer.

What other interesting stuff can I talk about? I feel like I'm getting old in the mission now. I'll be coming up on 20 months pretty soon. And 21 years pretty soon, which is just as cool I guess. But it's kind of sad, too. I was a pretty awesome 20 year old. None of you got to see me as a 20 year old, though, except through Skype and pictures, and I doubt the full awesomeness came through. And now I just have to hope that I can carry over that awesomeness to my 22nd year (as Joseph Smith reckons time).

As I was saying, though, I am an old guy in the mission. People ask me how much time I have, and then they all tell me I'm just about going home. That's so false. I still have four and a half months left. That's like a full semester of school. But everyone I knew when I got to the mission is going home. How sad. I'm just kind of rambling on about this for no reason in particular. But in case I haven't said it before, Elder Oliverson is going home in two weeks. Wow. He's almost done. That's kind of rocking my entire universe right now. And then six weeks later Elder Gonzalez and Elder Huaman leave. And I will be the only survivor of the office that moved the mission. I should probably record a bunch of the stories of that time period and in my last days wander El Salvador alone as my kinsmen get killed off, and then hide the record somewhere so that I can come back after the mission to show a new office elder where to find it so he can translate it and publish it.

Speaking of coming back after the mission, I'd totally be up for that. I'm very much looking forward to the whole airport thing now, so that will be awesome, and it means that sometime after being released I'll get to come back and do all the fun things you can't do as a missionary. And I'll get to see my converts and such, which is always a super plus. But I don't know when you'd want to, or when would even be good timing. So we'll just have to see I guess.

That's just about all I have time for today! Thanks for the emails and the updates on everything. I'm really glad that Romney is doing awesome again, but Obama still worries me. Especially if he wants more power to streamline the government while he already has the senate and the house. Somebody should keep that from happening. Have you guys seen Whale Wars? Maybe those tactics would work well here.

Lindsay, I congratulate you again on my money well spent, and I wish you even more success for February. And that goes for anyone else who needs to have success in February. You all know what February is known for, right? That holiday that's right there in the middle? Yeah, my birthday. Which is why February is the month of me. And love. So you've got to love me. I love you all! Have a great week!