The pictures below were from last week, but I thought I’d add a few more.  Except for the injured knee which was attached to the email.

Subject:  I didn't ride it, I merely gripped it. And it wasn't miles and miles, merely a mile and a half.

This week was really fun, and I love my area, but we do a lot of traveling. We did a lot of walking in other areas, so I'm not complaining about the actual work involved there, it's just that all of our investigators live really far apart from each other. It means that we teach a lot less lessons in the week, which isn't great. But we're hanging in there. 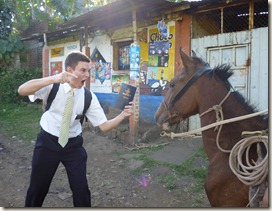 One random thing that's different here than my last areas: in my last areas, almost all of them, people only owned PlayStation 2s and original Xbox's. Every once in a while you'd find a Nintendo 64 or a PlayStation 3. Carlos, in my last area, had a GameCube, and that blew my mind. But now I'm here in Sonsonate, and everybody owns a Wii. They're huge here. And this youth named Rene that leaves with us a lot has two Nintendo 3DSs, which are pretty cool. That's just weird to me that everyone loves Nintendo here, but it's almost all about PlayStation in the rest of my areas.

That was random, I know. But I just looked up and saw a sign in this ciber that said that they mod Wiis here, and I thought it was weird, since I've only ever seen those signs for PlayStations.

We played soccer today against a bunch of youth in my ward. We had made a bet that the team that lost (our zone of missionaries against their youth) would buy a bunch of soda for the other team. And we were completely ready to do so should we lose. 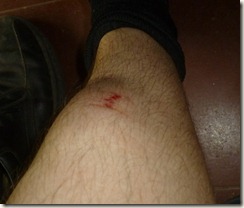 But we played them, and destroyed them (it was actually pretty close, and we probably only won because we had Elder Brown who is probably the most amazing goalie I've ever seen). It was a great game. And I got hit pretty hard in the shin at one point, and it made this big bump that doesn't hurt at all, but I thought I'd send a picture of it. I don't know if I captured the size very well, but it's kind of gnarly. But what made me mad is that the young men lost, and then they just kind of laughed and ran off, saying they didn't have any money to buy us soda. And soda is cheap here, by the way. So they got fifty cents together and gave it to us and that was it. That drives me insane. People here, especially young men, seem to just think it's funny to not do what they say they will. But now the whole zone is kind of upset. Oh well. I don't know where this story is going.

We had an intense lesson with a family the other day. It was the Moreira family, which we had found while trying to teach an old investigator named Taylor (girl). The family seemed pretty positive in the beginning. We started off just teaching the mom and one of the daughters, but this time when we went back Taylor was there as well, and people just kept on joining the lesson as we went. We ended up with seven or eight people, all of whom were adults and youth. Or rather, no babies or children.

The lesson started really great. Taylor had a question about why we think that Joseph Smith is God (a VERY common idea here), so that set it up perfectly for the Restoration lesson. We taught it quite well, I thought. But just as we were starting it, a guy came who was apparently the uncle and very very very anti-us. Also, I forgot to say that most of the family is very Seventh-Day Adventist. 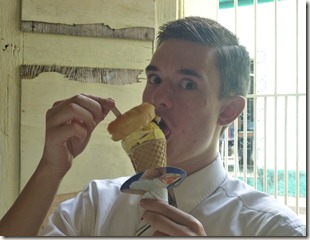 But the uncle started by introducing himself and then saying that missionaries had visited with him once and that he yelled at them for telling him that only one church is true. He, like most people in this country, believes that all churches are true, and that it doesn't matter which church we believe in. He even used the baptism example, which was quite funny, because he said that we have to be baptized the correct way to be saved, but if we don't just because we're in a wrong church (his words, right after saying all were right) or if we don't know, than it doesn't matter. We'll be saved by grace anyway. People like that can be frustrating, especially because he was the kind that loved to talk and try to show off how much he knew about the Bible. Regardless, we got him to stay quiet for the first vision, and the spirit was super strong. The mom looked skeptical, but Taylor and one of her brothers, Daniel, looked really interested. Or pensive, maybe. That was great, and we talked about authority and apostasy and everything. Lesson one was great. We then talked about how to receive answers to prayers, and it was awesome. And then, right as we were about to commit them to do it, this guy steps in and asks why, when we get baptized, we do it in the name of a dead person instead of Jesus. That destroyed the spirit and the lesson. We tried very hard to correct the doctrine, but the mom immediately closed when we straight-out said that we do baptisms for the dead. He and most of the rest of the family were also done right about then. We spent a good amount of time trying desperately not to bible bash and to just testify and tie everything back to Joseph Smith, but they were done. It went down the toilet. We tried to put another appointment, and the mom just said "I think we've said everything we need to say." and that was it. 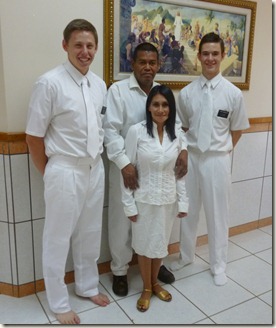 Silver lining: Taylor let us put an appointment with her, and she committed to read and pray. She seems even more interested, or curious at least. And the one that made it all worth it was her brother, Daniel. I don't know why, but I felt like I should ask him to say the closing prayer, which normally I wouldn't do since he came in the middle of the lesson and we had never even explained how to pray to him, but I did, and it was one of the most incredible prayers I've ever heard from an investigator. He really, really wants to know if what we're teaching is true. He asked two or three times in the prayer for an answer, and to know if Joseph Smith was a prophet or if all of this was a lie, and so on. Awesome. And that stupid guy I was talking about laughed each time he asked, but he didn't care. That was a powerful prayer. We're going back to teach Taylor and Daniel tomorrow, and maybe one other sister that was more or less, so we'll see how it goes. I'm kind of nervous about this situation. They want to know, but the environment is not very great for them. But I'll just trust that the Holy Ghost will do his job, I guess.

There is another great investigator named Carlos that we're teaching. He's about sixty, I think, but just seems to be soaking up what we teach. The other day he asked us what was the point of the Atonement, which caught me off guard. He said that he knew that Christ died for us, but that he resurrected, so where was the sacrifice? He knew he would be resurrected. Interesting man. I never thought about that. He said he even asked a preacher once, who didn't really answer it. So we explained about the Garden of Gethsemane and how the suffering was also spiritual, and he loved it. Great stuff.

That's about all I have time for. I talked way too long about that one lesson, but it was a powerful, bitter-sweet experience, so I thought that I'd document it. I love you all, and thanks for the emails and such!

PS: I still couldn't think of anything for the package. So just whatever, I guess.