Looks like David is feeling better again.  And he’s looking forward to a great few months of missionary work!  I love to hear that.  Today, of course, is David’s 21st birthday.  This is the age he will be when he comes home!  (But let’s not get “baggy”)

We also got some new pictures this week!

That's the really depressing birthday song that Elder Oliverson used to sing. You see, it's funny, but it also makes you think. 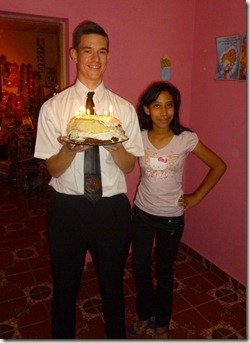 I'm probably a horrible person, but my last birthday was a little bit lame. I was in a new area that I didn't know, and nobody knew it was my birthday. I didn't want to play it up, you know? So I didn't tell anyone. And it was lame. So this time I've told a lot of people in the days leading up to it, and it's way better. I have two dinners planned tonight, and it's possible that I'll get free cake. The moral of this story is that one should not be full of oneself and try to make everything about oneself, but if one does so he generally gets more free stuff. Good life lessons.

This week was much better, and I hope that this email won't be as baggy as the last one. A few of you mentioned that I sounded a bit baggy, and I blame the sickness. When you're sick on the mission you get more bored than at any other time of your life. There is absolutely nothing to do besides read the scriptures, watch the Best Two Years again, and sleep. It gets old very, very quickly (but I still love the scriptures). And that leaves a lot of time to just sit there and think of home, thus me being slightly baggy last week. However, thanks to your prayers and very strong antibiotics, I'm no longer sick, and I'm no longer that baggy. 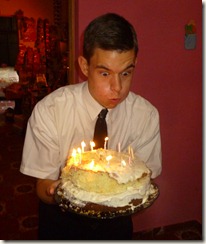 So we started out a little bit slow, since I was still recovering. I just felt exhausted all the time. But that went away after a few days of walking around the area. It felt great to get out and teach again. I've been a little bit worried about this area lately, though. The members used to be super excited for missionary work, and the area used to baptized a lot, but they've all gotten kind of complacent with the work, most of the investigators that the missionaries had have gotten baptized or dropped, and we spent a week not working in the area. That's not fantastic. So we spent a lot of time looking for new investigators this week, and talking to our ward mission leader about how we can get the ward moving a little bit better. I think that we've come up with some great ideas, and he's a great ward mission leader, so things are starting to happen. We at least have appointments to leave with just about all of the young men and the high priests, anyway. We tried to leave with the elders a couple weeks ago and set up appointments with all of them, and all of the appointments fell, so we may have to think of a better way to handle that.

We also had a lot of mission meetings this week. We had a multizone last week, which was not fun because I was sick, but we had the second part this week. And it was really interesting. Usually we just go over Preach My Gospel and how to become a better teacher, be more obedient, work better with 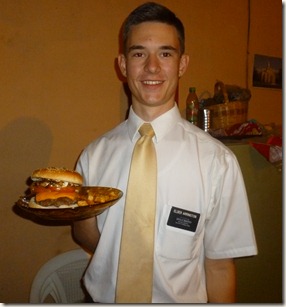 the members, etc., but this time we talked almost exclusively about ward council. Most wards in this country (and I'm assuming all of Central America) try pretty hard to have good ward councils, but it generally doesn't work. My personal diagnosis is that they do a very good job of seeing problems and things that need to be fixed, and they even come up with some good ideas to fix it, but by the end of the meeting nobody has made assignments, nobody has decided what the course of action will be, and everybody leaves exactly the same as they went in. At best people leave knowing that they have to "do better" at their visits, or something like that, but there's never goals, actions, or anything really measurable at all. Also, I don't think that I've ever been in a ward council here where there has been a secretary present. Or most of the presidents of the organizations. Generally it's just the Bishop, EQP, YMP, and HPGL. And the Bishop's councilors. The reason I just went through all that was, first, to let you all know that you have to set measurable goals and plan specific actions and assignments to see progress (which you should all know anyway), and second, because that's what our multizone was about. The church has come out with some new videos to help train leaders and teach them how to have a successful ward council, be a successful ward mission leader, etc., and we spent most of the multizone watching those and having practice ward councils. I really enjoyed it. I think it's not only giving us an idea of how to help the ward councils here in the mission, but it is also helping us prepare to be in those leadership roles after the mission. Good stuff. 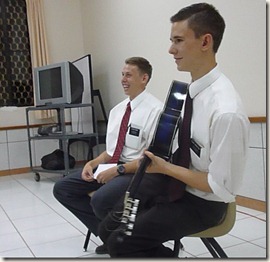 I just talked a long time about that meeting. But there were a couple other leadership meetings and such that I went to during the week. We didn't get to work a couple days in the area, since those meetings went really long, and some were in Santa Ana, which is a two hour-ish bus ride from here. When we did work in the area, we focused a lot on finding new investigators. That's the biggest difficulty that we've had lately, but I could definitely see that the Lord blessed us with people. We got a few references from the members that are pretty positive. The ward mission leader's niece, for example, is 10 years old and never got baptized. Her dad is inactive and her mom is a non-member, so we're working on teaching her and getting permission from the parents to baptize her. I'm not generally looking for children to baptize, but sometimes those are just little free baptism gifts that we get as missionaries. There's another guy named Christofer that has come to church on his own for three weeks. He's super awesome. His girlfriend is a member and has been helping him a lot. We taught him yesterday (we can only talk to him on Sundays in the chapel), and taught the Restoration, the Plan of Salvation (the entire thing, which we drew out on the chalkboard), and really quickly reviewed the five points of the Gospel 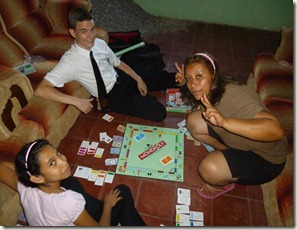 of Jesus Christ. He just kind of sat there and listened for a while, but was soaking it up really well. And he asked really good questions. At the beginning of the lesson he asked us how he can know what path he should follow in this life, and what he needs to do to be ready after this life. After we drew the Plan of Salvation and talked a little bit about it, he asked us what he needs to do to reach the Celestial Kingdom. He is seriously golden, except for two stupid things. First, he can only talk to us on Sundays. Second, he was already baptized once in another church, and I don't think he's very clear on the authority thing. But we tried to explain it, and he's going to pray and read in the Book of Mormon and see what happens this week. Good stuff.

We also got a couple other references for part member families and people who want to learn about the church. It's always a lot more fun to teach someone who wants to learn, but some people just want to know the information and not do anything. We'll hope that's not the case with some of these news we found.

I am completely out of time, so I'll have to go over those investigators next week. I'll have more teaching stories by then, anyway. I love you all, and thank you so much for all of the Happy Birthdays and such that you all sent. I think I'll go eat pizza to celebrate today.

PS: These last four and a half months of my mission are going to be awesome.