So, I got a call from the bishopric in our ward asking about when we wanted David to speak in church after he gets home.  Turns out that since David will arrive home on or about the 21st of June, he’ll be speaking on the 24th of June.  And everyone is invited!  I let him know in my letter to him….

Subject:  "Why would he want to kill you in public?" "I think she meant that he threatened, in public, to kill her."

This week was great, but first I have to complain. I really dislike Latin keyboards. They put the apostrophe in a different place, and they have to have extra keys (I think two, but it could be more), which means that, depending on the layout, one always has a shorter backspace, shorter enter, or shorter shift. Or a combination of them. It just makes typing stupid. This current model is the small backspace one, so don't be surprised if I misspell something and it's followed by çççççççç. 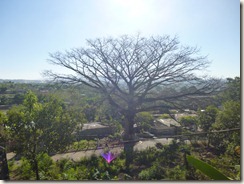 As far as Dad's email goes, wow that was baggy material. You told me the day I'm speaking in church. Wow. But that's kind of cool, too. I always thought, by the way, that I get released when I report to the high council. Are you saying they are actually two different things? That shatters my entire universe. And as far as school goes, I have no problem with you going into my email to try and get that set up. It should be the arring account. Change my password, do whatever it is you do, but make sure that it gets done, I guess. I don't want to miss a semester when I get back. Let me know, also, if there's something that I need to do on my end. To get that recommend from President, for example. Or to choose classes. I think I'll leave that mostly in the family's hands, but if you have any questions or anything just let me know.

Okay. So my new comp is named Elder McLean, and he's pretty funny. He's from Arizona, and ends his mission at the very end of 2013. That is so dang far away. So I get a kick out of people asking us both how long we've been out. Twenty months! Also, Elder McLean doesn't speak much Spanish at all. I'm still working on teaching him the conjugations for past and future tenses. It may be a while before subjunctive comes into play. But I'm also a terrible person because we mostly speak in English while we're walking. I force him to speak Spanish during planning and study, but it's just so much more fun in English! 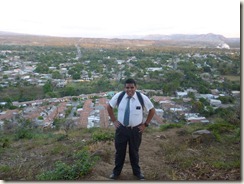 One of the things that my comp has learned, by the way, is that we work hard and we work fast. He has told me probably every day so far at least once that I walk too fast, and I just kind of smile and keep going. Missionary work can't be relaxed! And I feel like I've done a pretty good job of getting him up on time (new missionaries are always tired since they aren't used to working that hard), leaving to work on time, and always pushing to teach one more lesson before we go in. We've been finding a bunch of news as well, since we found a new colony called Lomas del Muerto. Missionaries haven't gone up there in a long time, because you have to climb this ridiculous set of stairs up the side of a mountain. I'll attach some pictures of the view, at least.

Also, our area is huge. I don't think I emphasized that enough before. But the biggest problem is that it's long. It's a skinny area. We walked from appointment to appointment yesterday, and I think it took an hour or so to cross half of it. Walking pretty quickly. But we were teaching lessons along the way, so that's just my estimate. I could be making it up. 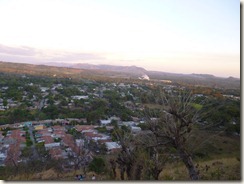 Our most positive investigators right now are Christopher, Estephanie, Saul, and Juan Carlos. Christopher went to church and we taught him the Law of Chastity and Temples, and gave him a picture of the El Salvador Temple. He loved it, and wanted me to put a personalized message on the back, which I did. He still seems to be waiting for a more concrete answer, though, so I think next time we'll outline a little bit how answers come and what the Spirit feels like.

Estephanie is a ten year old girl who is the Bishop and Ward Mission Leaders' niece. She has already told us that she wants to get baptized, so that's good. We just need to get her to church first. She couldn't come this week, though, because her parents took her to a baptism in some other church. But next week she said she could.

Saul is an 11 year old kid. He isn't super set on baptism, but the first time we went to Lomas del Muerto his mom contacted us. She and her daughter are members, and used to be super active. So we taught all of them. She told us that she wants to start going to church again, wants to go to the temple again, and wants us to baptize her son. I'm fine with that. And they did come to church on Sunday, minus Saul. He had to stay home to take care of his grandmother, who apparently can't walk on her own, so he has to help. We'll have to figure out a solution for that.

And Juan Carlos is still super positive. He's excited for March 10, and has already made arrangements to miss his English class on Sunday to be able to go to church. He couldn't go this week, but next week yes. We taught the word of wisdom, and he doesn't even drink coffee, so it's awesome. The big thing with him will be getting him to church and getting them married. But we'll do it!

Those are the most positives. I was a little bit bummed this week because of the ward. It used to be a really powerful ward back in the day, but it seems to be dying. We used to have 138 in the meetings, now it's 109. We had a ward activity that was announced three or four weeks straight, and all of the members had to bring investigators to get in. The turnout? About thirty members showed up, the activity started almost two hours late, (they started setting up half an hour after everyone was supposed to be there), the activity was lame, and absolutely nobody brought investigators. The only ones that were there were six kids that came in to play soccer and me and the ward mission leader basically forced them to come in to the activity. It was a talent show, by the way, and it was super boring. Bad planning. So I was a bit upset at the lack of planning and support from the ward, but that just shows us very clearly what we need to do here, I guess. Any ideas?

Alright, I'm out of time, so I'll wrap this up. Thanks for all of the emails, and for the pictures, too. A few people sent me pictures, and it was fun. Those dang nieces and nephews of mine are huge! They're practically people now! It's kind of freaking me out. I feel like I'm looking at pictures of some other Elder's family when I see them, because I don't know them at all. But I will soon! Less than four months! That means I only have four more months to baptize and reactivate families! I've got to get to work.