Ok, now it sounds pretty scary down in El Salvador.  Still David’s optimism continues to inspire.  The picture below is actually from last week, but it seemed to apply a bit.  Here’s the update:

This week flew by so fast I can’t even believe it. But it makes sense, because it was a crazy week. And not completely in a good way. First, last PDay was exhausting, which was awful because that’s the one day I get to rest at all. So I was dead tired all week. And because it was so full of stuff like playing soccer, which was way fun, we didn’t have time to buy any food, so both me and my comp were hungry almost all week. But we were still feeling pretty good up until the last few days.

I was contemplating not telling any of you how things are going here because I knew Mom would probably worry, but I think it’d be far better to just come out with it. Things  are really dangerous. In the last week there have been five gang killings that I know of, all right here in Atiquizaya. One of them was the ward mission leader of the Sucre ward, who was just an 18 year old kid. Really sad, that one. But seriously, don’t worry about me because there’s only three reasons someone gets killed by a gang here. One, they owe them money, which I don’t. Two, they are part of a rival gang or are mistaken for a member of a rival gang, which I’m not, and seriously doubt that I could be mistaken for one. Three, they randomly do it to make a statement, but they leave missionaries alone because they know we’re doing good stuff, and we’re always in pairs, and I don’t think they want to mess with that. So there’s not too much danger here for me, as long as I obey the rules. I’ve got God protecting me, and he’s pretty good at what he does.

So we were pretty stoked at the beginning of the week with how many investigators we had, and we were getting them ready for baptism, and it was great. We had a goal of eight this month, and it was actually coming through. But a bunch of bad stuff happened, and now we’d be lucky to get three. The first one was the biggest shock, I think. It happened a few days ago. We were teaching this one guy named Carlos and his family of four. That’s five baptisms, for all you at home counting. And it was such that if we baptize him, we baptize the family with no problems. And he was super positive. He had met with the missionaries before and had wanted to get baptized, but both of the Elders got transferred and the new ones never contacted him. So we were super excited. We even gave him some pamphlets and a chapter to read in the Book of Mormon, and he not only read them, he did so several times and wrote down questions for us to answer. You don’t find more golden people. But we went one day and he was too busy to meet with us, so we set up another appointment for the next day. When we went the next day, we found out that earlier that morning he had been killed by one of the gangs. What do you even do with that? At least he’s getting taught right now in the spirit world.

Then there was Henry. We were super excited with him as well because he’s basically given up his USA gang life and was just waiting for an interview with the President to get baptized. He had it, and a letter got sent to church headquarters to see if he can, and so we’re just waiting on that. But just two days ago we found out that he went out with some friends, started drinking, got in a fight with them, someone called the cops, and he’s now in jail. He gets out on Thursday, but still, this is terrible. We have a ton to work through with him now, and it really killed us to find out. We were so excited that he had changed! GAH! And then this one other guy, Rigoberto, had a date for this Sunday, but he needed one more attendance to church to be baptized. He was going to come yesterday, but his mom, who he’s been watching for a while (she’s 98) has now been refusing to eat and just says she wants to die. He’s super depressed, and couldn’t go to church because he had to go to the cemetery to prepare a grave. So that, in short, is how we lost seven baptisms this week. Needless to say, it was rough. Especially since we couldn’t find the other family we’re teaching, and almost every one of our referrals fell through. We recorded an all-time low for lessons taught in a week, and I don’t think I’ve worked harder or been more exhausted in my life. Missions aren’t easy. 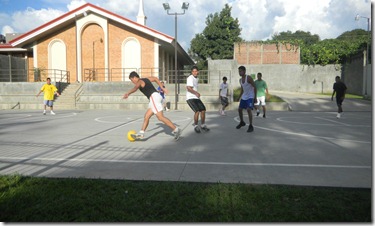 But there is a light at the end of the tunnel, so don’t be super sad. The ward started a soccer tournament with twelve teams, and each team has two or three investigators. In order to play in each game, the investigators have to do something like have a chat with us, go to church, go to a family home evening, or something like that. It’s super good because everyone plays soccer here. On Saturday we got six referrals from it, which is awesome, and we’re going to visit them this week. Then on Sunday we got two referrals for kids that have already been to church in the past a bunch and now want to be baptized. So maybe things are looking up. Plus we’ve got a baptism this week for a kid named Jorge who is super super ready and we’ve only taught him three times. He’s just been to church like twenty times. And we did find a couple more people through contacting.

So there you go. That’s about it this week. Like I said, it was pretty brutal, especially since one or two of these things happened like every day. We just kept losing investigators. And I feel super bad, but I didn’t get to finish Mom’s present. I figured I could get a somewhat good thing done really fast, but I want this to be awesome, so you’ll have to wait one more week. Sorry!

Oh, I do have one more really quick story. So yesterday was Fast Sunday, and we didn’t have any food at home, so we were starving all day after we broke our fast. We decided to try and convince people to feed us with a scripture. So we went up to people and read them Alma 8:19 and then would ask them what they learned from it. It worked with one of the members, and she fed us a ton, but just before that we tried it with a less active man whose wife makes amazing pupusas, and he totally didn’t get it. He told us that he liked the scripture because it likened the word of God to food and how we always need to eat it to receive strength. It was rather funny, but we turned it into a pretty sweet lesson that might help reactivate him. And then we almost got food, but they were out of pupusas. Shucks.

Oh, and I still haven’t gotten my iPod. I don’t think Elder Duzzett knows he can send it to the office to be left for me, so maybe if you can pass that on to his family for email or something we can make something happen. I’m so excited to get it and finally have something to listen to! I’ll try to email him, too, actually.

So there it all is. Thanks for all of your mail, as always. I love getting it and reading about all the crazy adventures you’re all having, like Lindsay and Mike getting into places for free, Stacey and Kyle not doing anything, Julie and Dave getting free food, Emily and Dave playing with kids, Michael and Steven doing weird things, and Mom and Dad enjoying it all. By the way, I’m super stoked that Max Hall is the starting quarterback now. He went to Elder Winters’ high school. Crazy.

Thanks again for all your love and support!

The following was later forwarded to me from Sarah Lynn.  Apparently David gave her a bit more info to forward our way.  Oh, and Pinochle is not big in my family….

Really quick, pass a few things on to my family that I didn’t write in my email. One, I didn’t have any pictures to upload this week. Two, go to YouTube and look up Arrington Pday. I had a member upload a couple videos just in case they didn’t go up on the server.[Note:  Said video could not be found, but we think it is on the server.  This might be the one:] 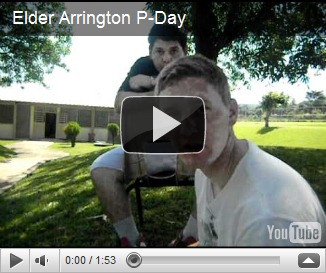 Also, ask my sisters about the song “I’ll go it alone” from My Little Pony. It’s been stuck in my head for days, and it’s a stupid song. But there you go. Also, tell my dad that the Man in the Iron Mask is amazing, and I’ve actually been thinking about that movie a lot the last few days. And Leonardo DiCaprio is amazing, as always.

Wow. Now I feel super bad because almost all of my email to you is actually just to my family. But hopefully it’ll result in something like you realizing that you’ve never seen that movie and then watching it with my family. And then again with me post-mission. Also, we’re watching Avatar again, all three seasons, when I get home. But one thing you may need to learn is how to play Pinochle. Ask Emily and Dave about that. It’s kind of big in my family.