This week brings a new companion, some fun pictures, a couple videos, and birthday wishes for mom!  Editor’s note:  That whole Raid/fire thing?  We did that as a missionaries, too.  Some things never change.

So, as I promised, I uploaded more pictures. And a couple videos. Actually, they’re uploading right now. But I feel like about half of you will watch certain videos and think, “Oh wow, that’s great.” and the other half will think “Oh no... Oh no no no...” So I’m going to explain it. And you’ll know what I’m talking about when you see them. 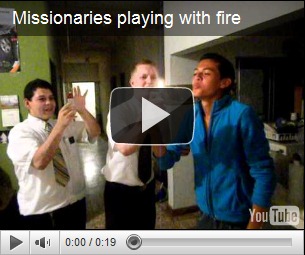 We have a lot of bugs, and usually they’re really big. Cockroaches, mostly. Lately we’ve found a much more effective way of killing them then simply spraying them with Raid: We light the Raid on fire. So that’s what got us started on this stuff. Basically, one night we had to be in early because of gang stuff, and had nothing to do. So we figured out what kinds of things we could set on fire. Yes, missionaries are crazy. Rest assured, though, that almost nothing in our house is actually flammable. The house itself is mostly concrete. But I figured you might get a kick out of how stupid we can be. So I sent a couple videos that I took. We’re still good missionaries, we just got bored. In the other pictures, you’ll see Elder Martinez leaving, 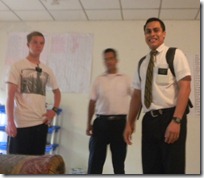 The Fuentez family (the ones that I’m in),  the Retana family, a lot of pictures of our dirty house before we decided to clean it, 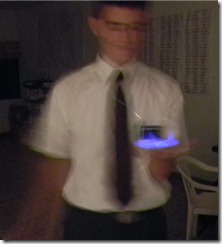 a really blurry picture of me with fire in my hand, Herson’s baptism, and a couple of this locust thing  we found. By the way, those things are everywhere, especially at night. In fact, kids tear the back legs off and play soccer with them, because they’re so big, and because they’re everywhere.

So I got a new comp, and he’s great. I’m so excited now. His name is Elder Wardlow, which is actually harder for the people here to say than Arrington, which I thought was great. His last comp was really terrible apparently, calling home and his girlfriend 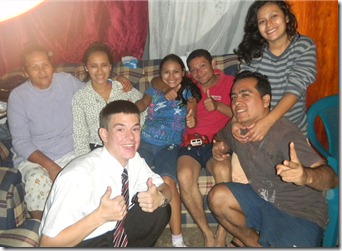 all the time, hugging girls, etc., so we’re both just ready to work. And it’s great, because there’ve been times where I say something like, “well we can go visit Mauricio, or we can stop by Henry’s house, or head to the chapel to see if there are  people we can start teaching.” and his response is always something like, “well, why don’t we do all three?” It’s great. The members have already gotten used to him, and they’re giving us a ton of referrals now. We’ve got a goal of eight baptisms this month, and it’s seeming like it’ll happen. We’ve got really promising investigators. This week we want to set four dates. 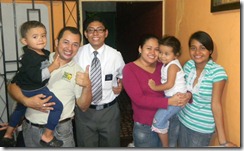 Conference was awesome. All the English speaking Elders got to watch it together, and it was a party. There were only like ten or twelve of us, but it was great. After the really good talks we were all just like, “whoa. That was awesome.” They were all really good, though. I don’t remember con 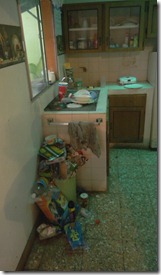 ference ever being so great. I took twelve pages of notes in my comp book. That’s awesome. And the spirit was awesome, of course. Really powerful.

Wow, I feel lame. I can’t even remember anything else about which to write. That’s okay, though, because I’m running out of 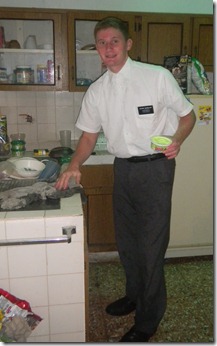 time. Emily and Dave, I wish you luck in not going back to Utah. Lindsay and Mike, I’m praying for you to get into BYU. That’ll be awesome, although not football-wise, from what I hear. Stacey and Kyle, I cannot believe that your baby is coming in six weeks. That’s one change here. That’s not any time at all. Crazy. Julie and Dave, congratulations 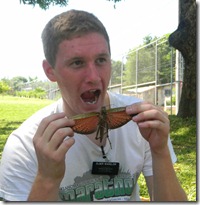 on little James Edward David Arrington De Rurange (I figured if he’s going to be named after me, he should have ALL the names.  Think on it). Michael, work is great, isn’t it? Keep it up. Steven, if you broke your finger, that’s both awful and awesome. Good work, and don’t do it again. Dad, your emails are great, and I already know who you voted the best. Sarah talked. But I hear you did it very fairly, so well done. 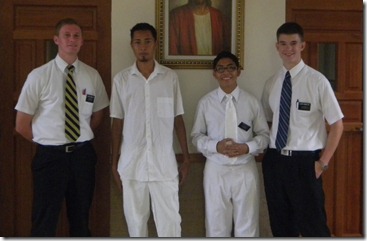 You really did end up winning. And Mom. Happy Birthday! You should find a very short but hopefully good email waiting for you, and next  week you will get my I-couldn’t-quite-finish-on-time present. Look forward to it!

I love you all, I pray for you all, and appreciate all of your support!