And apparently his final week in Mahahanga.  With just 3 months to go, and just 2 transfers remaining, Michael is moving on….

Subject:  "You don't know the power of Styrofoam!" 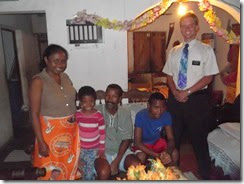 I keep trying to not mention it, but... time is FLYING!

Elder Hamm and I keep having these moments where people ask us how long we have left on our missions and one of us says "three months". Then we look at each other and realize just how short that is. It's terrifying.

We just got transfer news yesterday. I am getting transferred to... the mission office! I'll be Madagascar's newest office elder. I hear that the office elders still get to teach almost as much as everyone else thou 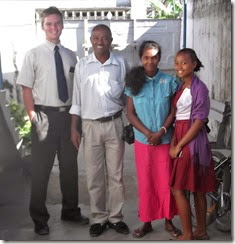 gh, so that's good. The area they work is called Betongolo, which means "big onions".

Also, my companion-to-be was just trained in the office, so I have as much time left in Madagascar as he has finished so far. I don't imagine that will make either of us less trunky.

Actually, I really haven't really had to deal with trunkiness yet. It's not that I don't love and miss you all in America, but I've been able to just focus on the mission. It also helps that all of my companions have been way awesome so far (and this new kid, whose name I forget, sounds super cool. Apparently he's a licensed pilot?), so they keep my mind away from home. 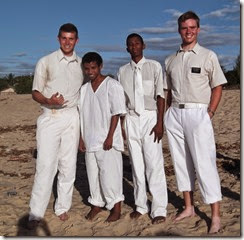 Some people would think that spending so much time in Antananarivo would be a lame way to end a mission, but I honestly couldn't think of a better way. Hanging out with mission president, being able to buy souvenirs (and a suit?), possibly learning to drive stick-shift... But all those things are coming up later. Let's focus on the present.

This last week was not our best for teaching. We caught far less times than we hoped, but it wasn't our fault. People just don't know how to respect a time that they give you. But that's okay. We got in three hours of contacting, and contacted some sixteen people, most of which seem way cool. 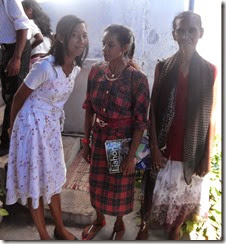 I'm kind of sad to be leaving Mahajanga right now, because we're starting to find some super cool people that I want to teach. But, that's life. My new pilot companion and I will just have to find even cooler people in Betongolo!

Florent came to church yesterday, which means that he is that much closer to baptism. That guy is going to get dunked for sure. He'll have to sort out some misunderstandings, like his idea that magma is heated by the fires of hell, therefore, hell is inside the earth. But he likes learning and is reading like a madman, so he'll be a great member here very soon.

The branch isn't doing to well, but it goes through phases. A couple of the young men 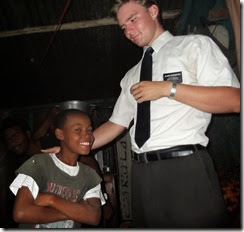 got in a fight on Saturday which made a few people angry, mostly parents, but I think that they have it sorted out well by now so that shouldn't be a problem any more. I hope.

We started teaching a lot of new people that seem way cool, but since I won't see them again I don't think it would be effective to talk about them. Suffice it to say, the missionary replacing me (a Malagasy) should have a great time teaching with Elder Hamm.

Definitely the highlight of the week was Sandratra getting baptized by Ulrich. Ulrich was baptized in December and gave us Sandratra as a referal in March. Now Ulrich got to baptize him. Good for him. Those two are going 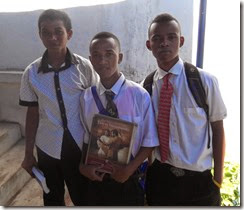 to be studs in the church, and Sandratra is thinking about going on a mission. Ulrich will be going as soon as he can.

I learned a couple of new Malagasy words this week. A member was trying to teach me "manifikifika" which means to shake, like you would if you burned your hand. After a minute I tried to double-check the word so that I could write it down and said, "the word was manofokofoka, right?" Wrong. That word means to be die-hard about something, and apparently it's funny, because the member couldn't stop laughing for like five minutes. 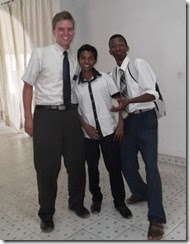 I tried to apply those words the next day and said it wrong again, this time coming out as "manorokoroka" which isn't technically a word, but could apparently be defined as "going around kissing people" (it comes from the word "manoroka", in case you were wondering). Again, the members with us broke out laughing. Hey, life is funny.

I will definitely miss some of the members here, many of whom are just the coolest buddies you could ask for. They are great people.

And so, my time in Mahajanga will end. But you know what they say. As one door closes...

So there's a bright future ahead, and life seems to only get better. 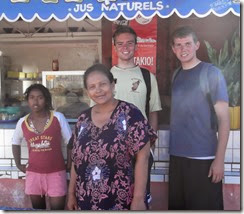 Thank you all for your emails, and know that I love you.

PS: Dad, the new server thing works like a charm and downloads pictures super fast, so I was able to put a few more on than usual (with a few captions!).