With what is approaching just 3 months remaining of his mission, Michael continues to focus so much on his investigators.  And we have some good pictures!

Subject:  "He died instantly. The next day."

I'm not sure if I ever told you all about Sandy. He was baptized back in September and went inactive immediately. We have been working with him ever since, and he always said that he would start praying again, but hasn't. This last week he finally just came out and said that there's no way he's coming back. He refuses to tell us what brought on this change, but his mind was set. He tried to give us back all his scriptures and asked to have his name removed from church records. Sandy is just done with the church. 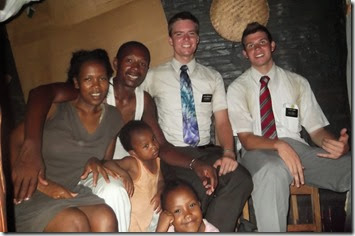 So that's not the best way to start an email, but this week only gets better from there! We've started teaching a couple of men named Diambare and Florent, and that's going really well. They are reading and progressing well, and both said that they would come to church yesterday. Neither one did, but we can work on that. They also just focus well during the lessons and ask good questions, so we really enjoy teaching them.

There is also this guy named David that we just met, who we think will be a really good investigator, along with his family. We haven't gotten to teach him a full lesson yet, but we think he will be diligent. Only time will tell.

We've been working with Diam and his wife, Arlette, for quite some time now. Diam has been a member for a long time, but went inactive for a while. His wife is not a member and can't get baptized yet because they are not officially married. But that should be taken care of soon. Another problem is that two of their three daughters are over eight years old, and need to learn from the missionaries. To make things more difficult, the oldest one, about 11 years old, has been praying at a Catholic church with her friends rather than praying with her parents. The parents allow her to "make her own decisions".

For a while we have been trying to get the older one to come to church (the younger one comes all the time), but she always runs away to be with her friends instead. We've tried explaining about eternal families with her, but she likes being with her friends.

So now we've started talking to her friends, trying to get their families to learn, or at least to let the group of friends come to church with us. And yesterday, they came! We'll keep working on teaching the other families, but who knows? This little 11 year old girl could have given us more referals than 95 percent of the members here!

There's a man here named Jean Pierre, the nonmember husband of a less-active lady. The lady recently started coming back to church and asking us to teach them. Why? Some Jehovah's Witness people started teaching her husband, and she doesn't want him to follow them. Uh... okay?

So we've started teaching Jean Pierre. He's a nice enough guy, but I just don't know if he is going to progress. He keeps asking questions like, "why do churches try to prove each other wrong?" and "aren't ALL churches true?". Even those questions would be fine if he would listen to the answers. But he doesn't really. We answered all his questions the first time we met him, and the second time he asked EXACTLY THE SAME questions. Jean Pierre got about half-way through asking his questions before my companion stopped him and said, "look, if we try to answer all your questions then you won't remember the answers. But the simple answer is this. We believe that God wants you to be a member of The Church of Jesus Christ of Latter-Day Saints, and we can explain why." 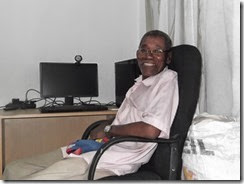 That's a solution that we have been using on a lot of people lately, including new people. I used to try to explain about authority, living prophets, modern revelation, etc. But just telling people that God wants them to be members of this church helps them make the commitment to get baptized. That's a useful thing.

This last Thursday we had a bunch of random and abnormal things happen, one of which I will share. I fell off of my back. Actually, I fell OVER my bike. One of the members here had done a front wheelie a while ago, and I, in of those moments where nothing seems like a bad idea, thought, "that shouldn't be too hard. I'll give it a shot!" I got moving and pulled the brakes way too hard, and flipped right over the handle bars. I wasn't injured, but I learned a lesson: don't try to do wheelies, especially on the mission!

This week has been really good, but as Mom said it, "Time is SERIOUSLY out of control"!

Keep up the good work everyone, and I'll see you soon!

PS: I saw David's wedding announcement and realized that Gabby's middle name is Marina. For what it's worth, that's the Malagasy word for "true". That may not seem significant, but hey, knowledge is power.

Pictures:  Dad, I can't seem to connect to the server, but here's a couple pictures of:

- Elder Hamm and I with Hery and his family. Hery has been a member for about a year and just moved up here from Antananarivo (Tanjobato). They are a way good family.

- A guy that was chopping down half of his tree. I don't know him and the tree has no sentimental value to me, but it just seemed like a cool Madagascar thing.