This week we got to talk with Michael for Mother’s Day!  And we talked for nearly two hours on Google Hangouts, which meant it was a video call.  It was awesome!  We loved seeing and talking with Michael on video—on the big screen, of course.  His smile was most impressive! 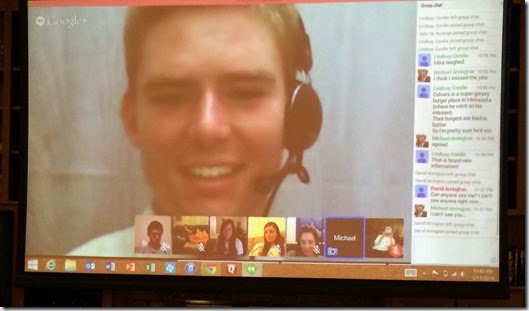 After that call, he still wrote an email!

Sandratra is probably my favorite investigator right now. He can be serious during lessons and focus, but he can also laugh and just be a buddy outside of lessons. He learns at our English class every week, and he really is our friend, rather than just a person being taught. I wonder what it would take to get other investigators to be like that?

One of our investigators is particularly frustrating. Frank has been learning for a while and is a super nice guy, and will make a great member. But the guy will just not come to church! We've tried inviting him, preparing him, sending the branch president to pick him up, and yesterday we tried picking him up ourselves, and he still hasn't come once. He keeps saying that he will, but there is always SOMETHING that keeps him from coming. We don't want to drop Frank since he is still reading the Book of Mormon all the time and ready for baptism in every other way, but this church thing is getting ridiculous!

But alas, that is missionary work. That being said, we're making a lot of progress with less-actives, who are coming back to church now. We've got several that are back to full activity, for which we are grateful. Life is good.

We also just started teaching this guy named Stefano, who is going to be a stud. He accepted baptism right away, and should progress very quickly. He does have a problem with coming to church because he attends school on Sundays (every day, actually), but that will be over soon enough and he'll be able to be baptized then.

Another man that we have started teaching recently is named Xavier. He's the guy who's kid had his eye pulled out. Xavier is down for learning about the gospel and could be a really good investigator. Honestly, I'm getting kind of sad that we're finding all of these cool people right before I leave Mahajanga. But hey, there's plenty of missionaries out there that can teach and baptize these investigators just as well (if not better) than I could. Kudos to them.

Our power got cut off again this month, for probably the fourth month in a row. The power company keeps promising that it won't happen any more, but it does. It's not really that much of a problem for us since we just turn the power back on as soon as the people leave anyway, but still.

I'm afraid I really don't have much else to talk about this week. Life has been going really well, along with the work, and my companion is a stud, so we're enjoying the mission.