Transfer time!  I’ll bet Michael misses Sabotsy Namehana.  His new area is a 7-hour drive from Antananarivo (or 45-min plane ride—I wonder how he’ll get there?)  It’s a port city on the North West of Madagascar….

Subject:  "It's a Japanese Jolteon!"

I will officially be leaving Sabotsy Namehana this transfer, going to... (drum roll)

To help you all understand how incredibly awesome this is, let me liken the island of Madagascar to a cake. The center is good, and nobody would complain for getting the center. The edges, however, are far more desirable. That's where the extra frosting is. 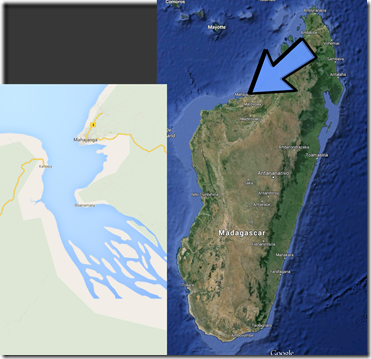 In the Madagascar mission, there are three areas that are craved above the rest. Fort Dauphin, Toliara, and Mahajunga. All three right on the beach. Everybody is content with serving in the middle of the island, but those three is "where it's at". So, I'm way happy about this transfer.

And my companion there will be another Malagasy elder, who's name escapes me. But I'll send it next week.

Elder Stokes is also getting a Malagasy companion, named Elder Rakotomalala. Elder Rakotomalala was in the same house with me when I first showed up in country. He's a way cool Malagasy, and they'll have an awesome time.

But enough about transfers! This week we also had Elder Renlund of the Seventy stop by and conduct several zone conferences, one of which I got to attend. It was way good. As an introduction to the zone conference we were asked to read three talks by David A Bednar, which were all way good. And after the meeting we had sandwiches, which were also very good. 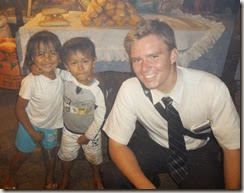 All in all, it was all very good.

One of the biggest things that I realized is the connection between faith, action, and receiving a witness. Elder Bednar describes it as a spiralling helix, going up and up, expanding wider and wider.

Once you have real faith, you will act on it. When you act, God will provide a witness. In receiving a witness, your faith will grow and give you a greater desire and ability to act, thus receiving a greater witness, and so on.

A large part of that is what Elder Bednar calls "acting in faith". We are probably all familiar with the idea of praying and asking in faith, hoping that we will receive. But a very large, yet overlooked part of asking in faith is ACTING in faith. If you have faith that you will be blessed, but don't act on that, then you will not receive. 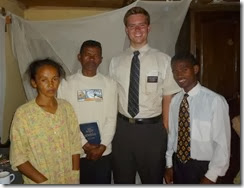 Coincidentally, there is a Malagasy phrase that fits right in with that: manao ari-zatom-pandriana. It basically means "a hundred ariary on the bed", referring to a person who lies on their bed, hoping that they will get money, but don't act.

The long story short is, when you pray, try making a commitment with God for everything for which you ask. If you ask for missionaries to see more success, go out and look for somebody for them to teach. If you ask for greater peace in your home, play hymns throughout the day. If you ask for a blessing, commit to God that you will act to make it happen. And then God will make up for weaknesses and shortcomings. 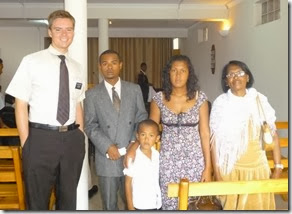 Even if we don't see the results right away. David shared a story about how he left one of his areas feeling like he didn't make that much of a difference. But just recently he found out that many of the people that he worked with are now enjoying the blessings of being active in the church.

Honestly, I don't feel like I've made too much of a difference here either, but who knows? You just work hard and hope for the best.

I have done some good here. We are teaching far more men now than we did before, and they are being diligent. I sent off a picture of Toky and Natasha and their son, all of which came to church for the first time yesterday. And they had a great time. Toky is a way cool guy, and I'll miss him.

Solo also came to church, but his wife and kids couldn't make it. Hopefully they'll come next week.

And I got a picture of Mamy, our DMB, his wife Oline, and their child who's name is unknown to me. They are a way good family. 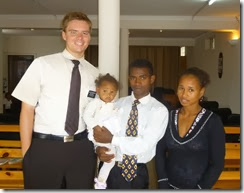 I also had a picture with Frere Baly, a member of our branch presidency, but my camera card decided to wipe itself for no apparent reason. So that sucks. Good thing there was nothing super irreplaceable! (I already copied almost all the pictures onto a different card, sent a bunch of the pictures to the server, and the rest are pretty much just landscapes, so no harm done.)

I think I included a picture of Hanitra and her son Iry, who is holding up a sign that David recommended I use. It's been way helpful. Notice on the bottom the pictures of Elder Stokes, Mamy, and myself. Hanitra and Iry thought it was hilarious, and it sits taped up on their wall between lessons. The two of them have been way diligent at reading ever since that paper went up on the wall.

That's pretty much all I have for today. The next time you hear from me, I'll be in Mahajunga (the frosting of Madagascar)!