A new area where it’s hot and humid.  And some new chances to use his talents!

Subject:  "All you have to do is get the floom!"

First of all, it sounds like Dad has some serious "I told you so" rights against Intel. Just for the record, I was entirely for the Intel PAD.

As for me, I've officially said goodbye to all the awesome people back in Sabotsy Namehana. We had some good times there. 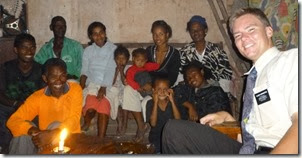 But that's change for you. After a twelve hour bus ride, that was actually not that unpleasant, I'm here in Mahajunga. The weather is humid as none other, and I'm told that it only gets hotter. Awesome.

We also went to church, and I got to see something that I'm not used to seeing at church: MEN. The mission has been pushing us to focus on teaching men, and I've been trying to do that. Back in Sabotsy Namehana that was difficult, because men were never at home. Or seen at all. But here, there are men EVERYWHERE. I'm pretty sure the population is like 90 percent men. And all of our investigators are either men or families, so the missionaries that worked in Mahajunga before did way good. I'm way happy about that.

On the other hand, I have a sad story. Growing up, my mom had always told me to practice the piano, and learn to play hymns, because there would come a day in my life, on my mission, when I be serving out in the middle of nowhere, and I would be the only person there that could play hymns for church. And I always said, "silly mom, that happens to other people. Not to me." 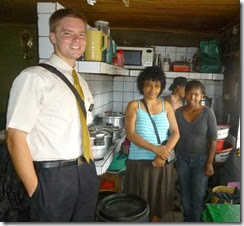 And guess who found himself sitting at an electric keyboard yesterday, praying like heck that he wouldn't butcher the hymns?

And then magically, just before the meeting started the power went out. I was like, "Waaaa! There IS a God! And He is merciful!"

Unfortunately He also has a sense of humor, because the power kicked back on right the sacrament. And there was still a rest hymn and closing hymn to go.

In short, I'm not entirely proud of my performance, but I plan to practice a bit more before next Sunday and do much better. 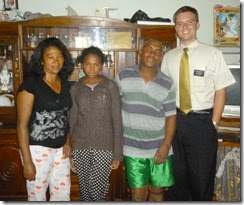 Other than that, we have been teaching some SUPER cool people. And tons of them. It's kind of like all the cool people that I taught in Sabotsy Namehana, but
almost EVERYBODY is that cool. I'm loving it.

There are exceptions however. For instance, we were teaching this one man, his wife, their niece, and her father about baptism, and they got into a huge debate about it, yelling, mainly at each other. Everybody staying good humored, but yelling nonetheless.

The husband, Pommefille, is Catholic. The niece and her father are Adventist. And the lady, Josiene, doesn't go to any church and hasn't been baptized. The Catholic guy started shouting that he was already baptized as a baby, so he is saved. The Adventist people shouted that his baptism wasn't complete since he was just a baby and it wasn't be immersion, and the lady was yelling louder than anybody, basically just summarizing what the other people said for no reason whatsoever. I was like, " what?" 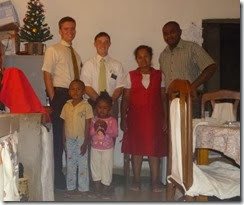 We quieted them all down and then said that arguing is useless and we (everybody there) need to learn GOD's will about it, not a church's.

So that was a fun lesson.

Especially in teaching. He know how to switch off, and of course he is good at the language. Quite a shift for me since I just came from training a newbie. So we've just been dominating the people that we teach. In a good, spiritual way.
I'm pretty sure that Elder Rakotonjanahary is good at English, but he only speaks with me in Malagasy for some reason. I've offered to speak English with him, but he politely declined. Maybe he just doesn't want to have to teach English class. 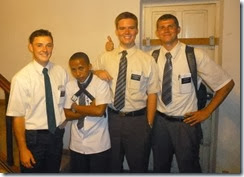 Which reminds me, English class last Saturday blew my mind. There were seven or eight people there (all men), all of which could hold a solid conversation in English. They got into a debate about whether or not there should be bribes here in Madagascar. And they DOMINATED it. I was very impressed.

Next week's debate subject will be whether or not people need alcohol. The votes lay as follows: 2 say that we do need alcohol, 4 say that we do not. One of the guys that is for alcohol asked me if I had drunk before, and I said no. And this little punk worked up the nerve to say that I was lying!

He said, "your mission leaders just tell you to say that. But really, you used to drink all the time." He also claimed that EVERYBODY in America drinks all the time, because that's where alcohol was originally invented. Which is not true.

I still don't think he believes me, but I'm glad to know that there are nonmembers that are still against alcohol. 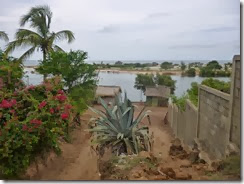 All in all, Mahajunga is way awesome. The only slight downside is the temperature, but hey, if that is the only trade-off, I'm down for it!

Thank you all, I love you all, keep up the good work!

PS: Mom, I love hearing about your missionary efforts. And did you manage to, um, pass along the pass-along card? 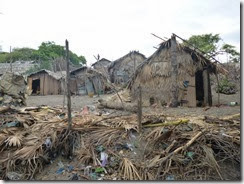 There is also a picture of me leaving my old house, and the people in it are, from left to right: Elder Stokes (my ex-trainee), Elder Rakotomalala (Elder Stokes' new companion, who was in my house when I first came in country), me, and Elder Hamm (my MTC companion). Good times.

And I threw in a couple pictures that I took as we came across the beach, at an area that I call "Tortuga". It's just very piratey.

The last picture is of some sweet houses here. Which is cool.