Now we’re counting down to Michaels Christmas call.  Getting only two calls each year (Christmas and Mother’s Day) makes each call a big deal.  But before we get there, here’s Michael’s letter from 2-days before…

Don't get me wrong, we've had tons of fun. It's just been really busy.

We started off this morning when we walked out of our house, met a few of our branch missionaries and a recent convert, and we all got on a bus to check out some caves. Which was way fun, and we got some pictures from it.

Then we came to the cyber, printed off emails, went to a hotely for lunch, and ran back to the house to change clothes.

From there we ran back out to the city to meet somebody for their wedding. A huge event, right?

Six people showed up, including the couple getting married, Elder Rakotonjanahary and myself.

So we got there just before 2 o'clock, since the ceremony was planned for 2 o'clock. We sat down and started waiting.

Anyway, they finally showed up at 3:30, shook our hands, and walked into the room with the person that would marry them.

At 4:00 they walked out, shook our hands, took two pictures, and left. So that's a Malagasy wedding for you. 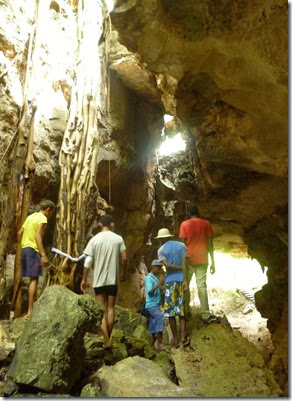 But we got the one picture, and most of the other important ones are already on the server, so no worries.

Anyway, that's enough about the craziness of today. This week has been really good, and we are pretty happy with how the area is going. Probably my favorite member right now is a recent convert named Ulrich.

He is about 18 years old, and just as diligent as a person gets. Ulrich is, as far as I know, the only member in his family, and attends church, Preach My Gospel classes, and English class. He's just a way good guy that I love to work with. Just a random thought for you.

We had a lesson with this lady that was pretty ridiculous yesterday. She would ask a question, and in the middle of our answering it she would yell for us to be quiet, and then re-explain her question, and why it was stupid that we hadn't already explained it. So we started answering it again, and she did the same thing.

The Bible explains the fruits of the Spirit to be peace, joy, faith, etc. That's how the Holy Ghost bears witness. What it doesn't say is that the Holy Ghost doesn't just pop in and throw down peace for everybody. You have to set up the situation for it. Then He can increase that peace, that happiness that you are sharing. He has a difficult time throwing out new things. He acts on what WE put out there.

So when teaching, you have to do your best to lay out the fruits of the Spirit, letting the investigator know that you care about them, the joy that you have received from living the true gospel, and THEN the Holy Ghost can bear testimony that it is true, to both the teacher and the student.

Gee, if only I had known this earlier!

One last thing. Elder Rakotonjanahary is awesome. He is just one of those classy, funny people that's awesome. For example, he asked the other day if I knew which path we are supposed to take to get to our next appointment. I pointed to the one I thought and said, "it's that way, right?". He shook his head, pointed in exactly the opposite direction and said, "almost right."

Just a funny guy. Apparently he also came to Madagascar at the same time as me, so we're the same "age". Cool, eh?

So that's been my week. And we're looking forward to another good one.