This week we approach one year out on his mission!  Wow.  Time is advancing.  And we have more pictures!

I've been buying a tube of Pringles for each of the last couple weeks, and they are dang good. I've also learned from grocery lists that I make that my English spelling is terrible. I've been writing things like "Peanut Butte" and "Egges". I swear that I used to be good at that, but now my brain is about as functional as the fan in this cyber. It runs for about seven seconds and gets stuck as it pans to the left. Weird.

David, I'll say this now, because I keep forgetting to answer your question. Sorry, but I have no idea where they are. I too remember us using them back at Lindsay's house, but after that... nothing. Sorry about that. 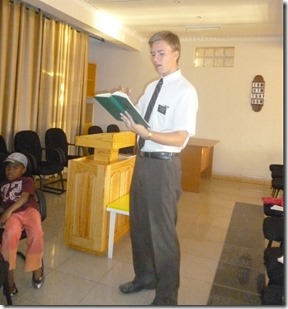 And now: area report. Solo's baptism is officially going to take a long time. Partly because of his family, but mostly because of him. Our last lesson was us debating the existence of false churches. I don't know if I've said it before, but Malagasies have this idea that all churches are true. And Solo is no exception. We've tried explaining the authority that is needed in the true church of God, the Apostasy, true baptism, and who knows what else, but he just can't accept that some churches are not true. He ended that last lesson by saying that all churches are true, but they each have their own ways of following God. Again, we tried to explain that Jesus taught that there is only ONE way, but Solo told us that that means that ANY path will lead to God, as long as Jesus is talked about. Honestly, I'm running out of ways to tell him the same thing. Any help would be appreciated.

We gave out three Book of Mormons (Books of Mormon? Copies of the Book of Mormon.) this week. All of the investigators that were given the books seem really diligent in reading, so we're pretty excited to watch the Holy Ghost blow their minds with truth. One of those investigators (named Lanto) even came to church yesterday. We had a sort of stake conference, which may have been a strange first experience for her, but hey, church is church. 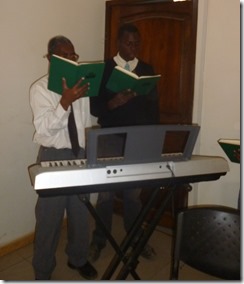 There was also an investigator at church that we had met the day before. He had met missionaries down in Antsirobe, and his name and number were sent to us in Sabotsy Namehana. He (Christian) also gave us soda and crackers the first time that we came to his house, so I'll count that as a way good investigator. Both my spirit and my stomach would be happy to stop by there again.

And as long as we're talking about investigators at church, there was this girl named Fiononana too. Fiononana (and her sister) has been learning from missionaries for a long time, and during this last week we stopped by their house again. We started talking and she asked if she could tell us a story. Of course you can! Go for it.
She explained that she has a cousin (nonmember) that has been reading the Book of Mormon and believes it to be true, but her family is way against the church. So this cousin isn't coming to church, but she wants to. What can we do about that? Pray that her families hearts will be softened. But that's about it.

But Fiononana also had a more personal question. She explained that she really wants to preach the gospel, but can't, because she's a girl. She would look at us missionaries and think, "they are so lucky, they get to spread this message to people, but I don't, just because I'm a girl." Whoa... say what??

We asked her why she thought that, and she goes, "well you showed us that scripture in 1 Timothy 2:11 that says women should learn in silence!" And I started laughing to myself, thinking "yeah, that was a good one..." But seriously, we explained that women DO have the opportunity to go on missions, and they can spread the gospel just like men can. Moral of the story: be careful which scriptures you give to people, regardless of how funny it may be.

Last note about Fiononana. She told us that she used to not really read the Book of Mormon, but just thought it was boring. Then, she started really getting into it. Now she loves reading it, studying, just learning about the gospel. That's the work of the Holy Ghost for you. Get somebody to open the Book of Mormon, and you've set them on autopilot for the baptismal font.

Jean-Chris and his wife are allegedly still reading in the Book of Mormon, but we weren't able to teach them this last week because they had left to work early one day (when they were supposed to learn from us) and his wife's sister popped out a baby on the other day that we learn. But this coming week is still solid.

I don't know if I explained about Lanty and Lanto, but Lanto is that lady that came to church. She and her husband are one of those that were given a Book of Mormon, and so far it looks like smooth sailing. Lanty just likes reading stuff in general, so we're not too worried about them. All we really need now is a good member to befriend them, and the hook that we laid in their metaphorical mouths will be set solidly. Mwaha. 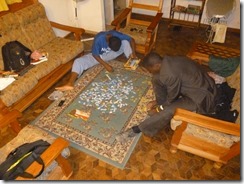 Olga was yet another of those given a Book of Mormon, but I want to talk about her testimony of the Bible. She told us this story about one night when she was walking around (Bible in her bag) and saw a witch. She claims that a Malagasy knows a witch when they see one. The guy was coming right at her, but she reached into her bag and clutched onto that Bible (rather like holding to the Iron Rod?) and that witch guy stopped, walked around her in a big arc, and left. Interesting. Witches are pretty well known around here, and anybody you ask has stories to tell about them.

A few last details about yesterday. My companion and I, having more lessons planned than we could handle on our own, split up with ward members, and set out to teach. By the time that we met back up, almost all of the twelve lessons that we had planned fell through. But, the two families that I (and the returned missionary member that was with me) taught were awesome, and ready for their own Book of Mormon. It's been a while since I've had a companion that really knows how to teach, and it was awesome to be with him. Good stuff.

Dad mentioned the general growth of missionaries throughout the world, and asked how that's been affecting Madagascar. So far, we have a lot more missionaries. Especially sisters. But we're also getting way more (much needed) elders. In my MTC group, there were four of us. In this next group that's showing up in September there will be sixteen. That's a lot. As for mission or area growth, our mission president has been really focusing on "centers of strength". He had been working on shutting down almost all of the provinces, but with the new missionaries coming here he might be able to keep the provinces running, rather than packing all the troops here in the main city. Only time will tell.

But seriously, let's talk about all-a-y'alls. Dad, you also mentioned that you may be rewiring the pool bathrooms, laying in speaker equipment. That saves going on top of the roof, but have you considered setting in a full speaker system (from microphones all the way down to speakers, possibly set into the outside walls of the building)? That way nobody would have to depend on the "Mouse Palace" for when they announce things. I don't know. Just a thought. 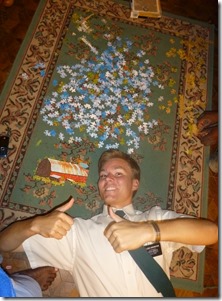 As for Mom's business about Steven getting the rock wall job at Hawthorne Farms, I actually do have some advice. First of all, ask questions. It might feel awkward asking Kyle Moore how to tie a knot, or asking your boss about what you can and can't do with free time, or stuff like that, but it's better to ask a question then to remain un-smart. That was kind of a problem that I had back when I worked there. I started wandering when nobody was climbing (trying to help out where I could!), but my boss didn't agree with that. Just ask to be safe. Also, there's an old-ish guy named Paul that climbs a lot, and he has the technique pretty much down. If he's still there, learn all that you can from him. Aside from that, climb as much as you can (safely), and take full advantage of the free gym membership that comes along with the job. I expect  you to be the size of Dwayne Johnson when I get back.

Julie, I love hearing about your family and baby raising experiences. You explained that James has a bottom-less stomach, while Parker spits up endlessly. Have you considered that the two issues could be related? The way I see it, there could be some kind of portal in James's stomach, so that every time he eats, the food goes straight to Parker's stomach. Thus, James is always hungry, and Parker gets overfilled like a sink that was left running. Just a possibility.

As for the rest of you, keep having a great time for the next one year and three days. And then the real party begins.