More strong testimony about faith, how powerful that is!  All people need to do is ask.  Sort of like that snake on a stick in the desert that Moses had to deal with.  Simple, yet almost too simple.  Anyway, we got a couple pictures this week!  And could a transfer be coming in a few weeks?

Subject:  "They said they didn't want you. They said you're not 'Slurpee' material."

Well, well, well. Driver's licenses, 3lbs burgers, and pool parties. This has been quite a week. 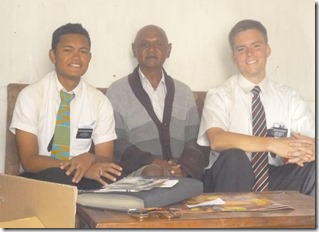 Things I have done include going to a musical presentation at one of the churches here, and honestly even that felt un-allowed. It just feels like anything other than teaching or finding efforts is forbidden. Even at the first baptism we had back in Ambohimanarina, I remember thinking "shouldn't we be out teaching somebody right now? Why are we wasting this time? Oh, right. This is a baptism, not a waste of time." I even told it to my companion at the time, and he looked at me like I needed some serious brain surgery. Good times.

But back to this week. Solo seems to have entered a mental "Mexican Stand-off" ("only we ain't got no Mexicans...") regarding true churches. We keep trying to tell him that if the message of the Restoration is true, then this is the ONLY true church on the earth. And he's like "sure it is. But the Catholic church teaches this, and the Protestant church teaches this, and your church teaches this. So which one is true?" MINE IS TRUE, dang it! Now go pray about it and so that you can know for yourself. Sometimes I feel like I've just set up all the dominoes for him, and say "push the first one, and watch the truth come out". Then he pushes the first one BACKWARDS, and turns to me saying, "you don't get it, do you?"

I GET IT ALL! Just understand what I'm telling you! Man, it's just frustrating sometimes. Actually, he asked about getting baptized, and we had to backpedal a little bit. He just doesn't really understand the Restoration, and his testimony is based on facts rather than faith. 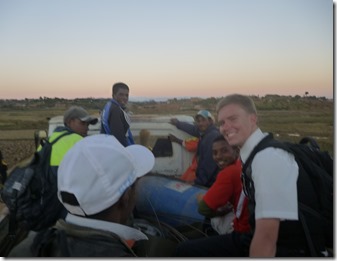 That's one hugely annoying thing about teaching. People that refuse to have faith. We had a lesson where we were teaching about the Word of Wisdom and the investigator goes "well where is that in the Bible!?" That's not really the point, now is it? I'm telling you the law, no go PRAY about it to know the truth.

I mean, who gave us the Bible anyway? God. But through people. Wouldn't it be better to have an answer, a direct line of communication with the one being who is all knowing, all loving, and already wanting to help us? Missionaries ask people to go straight to the source of all knowledge, and people keep turning to other things. It's like telling a thirsty person that there's a drinking fountain right behind them, but they're content to lick the dew off of the grass. I mean, what the heck people?

People are just ridiculous sometimes. And I just rolled out two pretty awesome examples right there, in case nobody noticed. I feel like I could write a book, called "Dominoes and Dew: Observations of Stupid People". Actually, "Stupid People Being Observed" might be a better title, to avoid the confusion found in title one. I am not the stupid people, but others. Or maybe I am too. Who really knows?

Jean-Christophe and Minja. I don't know if I ever told you all about them, but they're pretty cool. They've been way diligent in reading the pamphlet that we gave them, and they understand what they read. On the downside, they had a bit of a fight recently and we didn't get to teach them for a while. But things seem to be better now, and we'll be teaching them about the Book of Mormon this week. Exciting!

We also have been working to find the houses of all our members, active or inactive. Through that effort we found an inactive member that lives ridiculously far away, but he's way good. He still reads the Book of Mormon, and they only reason that he hasn't come to church is because of his work. But he accepted us right in, and he seems like a great member. We just have to get him back to church.

We also found an "active" member that prays to Jesus, so we'll be returning to him shortly.

One stat that we take in this mission is "Father-Lead-Families". That is, families in which the man of the house is not a member and actively learns from the missionaries. Looking back over this week, comparing the possible versus the actual stat, we caught about half of them. People in this country just don't get the idea of setting up a time and sticking to it. Seriously, there's like six of them that we should have taught, but couldn't because they weren't at home. That's frustrating.

But generally the work is looking much better in Sabotsy Namehana. Attendance at church this last week was 36, about half of what we normally get, but it was a Fast Sunday. Apparently church attendance is less important on Fast Sunday. Still, looking around, everybody there was solid members. The best of the best. That was a good thing to see.

And we had another great lesson with Sedra and his family. I'm a little bit worried about his wife, since she barely speaks during the lessons, but when she does talk it's always to ask a good question. We just taught them about the coming forth of the Book of Mormon, and they loved it. Sedra asked, "if this Book of Mormon is scripture, then why don't they make one book that includes the Bible and the Book of Mormon?" Well, I actually have just such a book. And here's a verse in Ezekiel that explains that very thing. Two books becoming one in hand.

But enough about me. Let's talk about you. Mom and Dad both mentioned Steven getting his driver's license, and his "enthusiasm" about driving. Mom said that he has trouble seeing, so you might consider adding in a "prescription windshield".

And back to me. I just remembered that we got transfer news last night, and guess who's transferring! Not me. Actually, my companion is! Elder Andriamanganoro showed up here a month ago, and now he's bouncing right back out. And I'll be staying here with a mini, which puts me in an interesting position for the next transfers in September. Stay tuned.

And back to you all. We're kind of crunched for time right now, so everybody have an awesome week, and keep helping the missionaries in your wards!

PS: Mom mentioned that talking to people gets easier when you tell yourself to do it. Think of it like a date. Just go up and commit yourself to talk to them. And if they shut you down, walk away with your head hanging sadly as you walk home to cry into your pillow.

No, but seriously, commit yourselves to talk to one new person each day, and if it feels right, bring up the gospel. Thank you all!

And here’s another add-on note just for Julie…

So I had just closed down the browser and everything and remembered that Julie's birthday had passed like two weeks ago, and I keep forgetting to write about it.
Well, happy birthday Julie!

I know it's not as great when people say it two weeks late, but honestly, the "Julie Birthday" has always given me trouble. I feel like Stacey and Steven's "Ten-year-apart-twins" birthday is enough excitement for July, and the birthday part of my brain shuts down until August starts up. Sorry about that.

Anyway, have a great week everybody!