This message is complete, but it did come in two parts.  Occasionally we get a message that is obviously unfinished, followed by another that is the complete version.  Something to do with Malagasy computers in cyber cafes, I’m sure.

Pictures this week, including one of my favorites:  That ethnically diverse group of four missionaries with Madagascar in the background.  Good lookin’ guys!

Subject:  "You really shouldn't mumble, because I cannot understand a word you are saying."

First of all, I opened my email and found... EIGHT emails! Julie even wrote twice as much, so that's a lot of mail. Thank you all. (And a special thanks to Kathryn "A Froglet" Frogley) 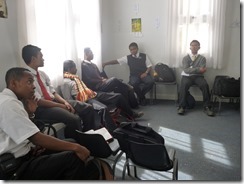 After being called out by mom, I looked back on last week's email and realized that I sounded pretty negative. Let it be known that that was mostly unintentional, and generally we stay pretty positive around here. But sometimes it gets hard to do that when people refuse to accept such a simple doctrine.

One guy that we taught, that I might have already mentioned, is named James. We've taught him a few times, but James just cannot accept that "Jehovah" was a name of Christ before he came to the Earth. It was kind of funny though, because he brought that up and said that if we could show him ONE scripture that says that Jesus Christ is Jehovah, then he will accept it. So my companion pulls out a note card that's filled with scriptures, all proving that Jesus Christ is Jehovah. He started reading them to James and James said, "okay, that's enough. I'll study these verses and get back to you." And Elder Andriamanganoro said, "are you sure? Because there's still tons of scriptures here that prove this point." I laughed at that. But really it's kind of rough. I've found that when somebody really sets their mind that something must be one way, they'll just deny scriptures and any truth that you give them, trying to make themselves right. Although a drop talk is looming on the horizon, we are trying to help him open his mind, however little. Aside from that, the people that we teach are progressing very well. Sedra has been reading about the Plan of Salvation and starting into the Book of Mormon, and doesn't seem to have any serious problems. His wife and family weren't there yesterday, but we set up a program with them for this Friday, so they can all learn then. And our branch president has offered to go teach with us on Friday, so we're pretty happy about that.

We also tracted into this guy yesterday named Fano, who could be a really cool investigator. He brought up all kinds of things, things on which he is different than most churches. The cross, for instance. He explained to us that he has studied the Bible, and he cannot find any reference to the cross being a holy symbol. Well, we agree with that. He mentioned that we shouldn't pray to statues of people or anything. Well, we agree with that. He had a bunch of other questions too, and through that we learned that pretty much everything he believes in is the same as the LDS doctrine. And when we ended the lesson he asked, "how soon can you come back?", just like that. We offered to stop by next week and he asked, "don't you have time before that?" We'll be returning there tomorrow.

We also taught this couple named Lanto and Lanty. They are Catholic, but very open-minded and willing to listen. Most interestingly, we invited them to come to a branch activity on Saturday, and they accepted. At first I just thought "suuuure you will. Just like every other investigator that said they would come." But we went to the activity, and who do we see waltz in the door? Lanto. Her husband couldn't come, but she stopped by and enjoyed a lesson by a returned missionary, one by our branch president, and then mofo sakay (spicy-ish "pepper bread"), made by one of our members. I'll have to get the recipe for that. But she had a good time and got to meet with a bunch of the members. My new companion and I were pretty excited about that. 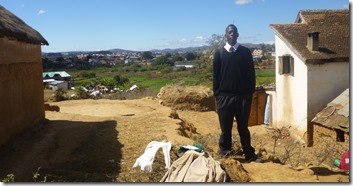 Which reminds me: I have a new companion! Elder Ranomenjanahary (or "Teddy", as he goes by) is my first mini missionary companion and my third Malagasy companion (in a row!). That makes three American companions and three Malagasies. And I have loved them all so far. Everyone says that they have had companions that they didn't get along with, but so far all of mine have been awesome. (knock on wood)

But yeah, Teddy is from Mahajunga, which is about the hottest place in Madagascar. I mention this because it gets fairly cold here in our area at night, and he just suffers through it. Poor kid. But he takes it all in good humor, and turns on our heater as soon as we walk in the door. Last night he told me about how he is used to walking around in the dark, because back home, whenever his parents said there was work to be done, he would run out and hide. Then, since he was afraid he would get beaten for that, he would just stay out until nighttime, wandering the back roads of Mahajunga. We had a good laugh about that.

So mom has been numbering her emails that she sends me since the beginning of my mission, and this last one was number 50. Which is getting pretty close to the big "5-2", if you know what I'm saying. To more weeks and mom's emails could make a full deck of cards. Stacey mentioned it, and Kathryn asked about it, so here's the big news... I'll be hitting my year mark in a week and a half! That's the mission half-way done. I'm planning to surprise my companion on that day, and we're going to stuff ourselves with an entire cheesecake. Leftovers are unacceptable. 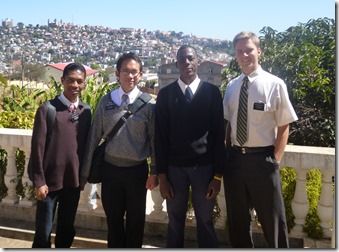 I also managed to throw a couple of pictures out into cyberspace, so let me break it down for y'all. First up, we had a district meeting a couple days back, and as I looked around the room I realized that me and our district leader (not in the picture) are the only Americans in our district. Other than that there are five Malagasies and one Tahitian. There's a fun fact for you. Which reminds me that our Tahitian will be moving out this week, moving to Antsirabe, and being replaced by another mini missionary. And since Elder Lee (the Tahitian) was living in our house, that will leave our house as 75 percent Malagasy, and 25 percent me. And since Elder Lee is leaving, the elders in our house decided to take a picture together at the mission office. From left to right (like reading a book) there are: Elder Andrianjarasoa, Elder Lee, Elder "Teddy" Ranomenjanahary, and Elder "white-as-can-be" Arrington.

Another is a picture of a less-active member that we found out in the middle of nowhere. We have a list of all our members, and we are currently trying to track down all their houses. Addresses in this country are about as useful as wings on a penguin, so progress has been slow. But we found him, and he told us that he (Dodier) is only inactive because of some work that he has, but he'll try to come to church. And lo and behold, he came yesterday. And to top it all off, he gave the opening prayer in sacrament meeting. So that was awesome. I got a picture with Dodier out near his home.

And Elder Ranomenjanahary wanted to get his picture taken, so there you go. A Malagasy photo.

And speaking of sacrament meeting yesterday, we officially doubled our attendance from last week. Last week was 36 people, this week was 72. Quite a difference. The stake president attended with us, and that helped boost our numbers, but mostly it was members. Diligent members. And one investigator. Our investigators aren't coming to church for some reason, but we're working on that. Either way, we had a good 65 members of our branch in attendance yesterday. That made us happy.

I'm never sure how to end emails. Or letters. Or virtually anything written or spoken, other than missionary lessons. I guess for now I'll just say, thank you all for writing, for supporting me and the other missionaries out there, and for being such great family and friends.

PS: sorry about the first, unfinished, message. Darn computers are getting harder for me to work with. I'm starting to understand why old people say that they feel like dinosaurs.