Week 6 in the Mission Office

In which David has a chance to have dinner with the Mission President who apparently is a “really chill guy when he’s not cutting our heads off for something.”  Reassuring.

That, and the house he lives in is haunted.  There you go.

More pictures this week!  Note that I updated last week’s blog with some of the pictures from last week.

Subject: “I resent that. Slander is spoken. In print, it’s libel.”

First, this week was crazy. I love the emails you all sent me, which were fun, but I feel like most of what I will write here will be about me. Sorry about that.

Dad, the talk. I loved it. We all kind of listened to it in the office, which was awesome. Really, it cleared up how I felt about it before. What actually happened is that the version I sent you is the English version of the Spanish talk I read, and lately there’s been another 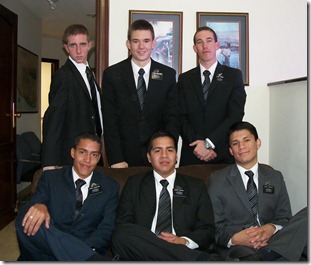 Spanish one floating around the office that is much longer and goes a lot more in depth, but some of the things it says just sound like apostasy. Really, we have absolutely no way to prove that it even came from him, and it doesn’t feel like it did, so we just have to be careful. But the actual audio version has been much, much better. Thank you for sending that.

You also mentioned in your email to me a guy you talked to that was really crazy and kind of apostate. It made me laugh because that’s how a lot of people are down here, especially those of other religions. Most Catholics, for example, haven’t been to church in years and their Bible is covered in dust, but good golly they still believe it! Have they read it? Probably not. Anyway, it reminded me about this time we were at the multi-zone with Elder Falavela last week, and he asked all the Elders, “What is agency?” Easy question, right? Well one American Elder, who has a history of being very frustrating to us office Elders, got up and said straight out that it is the ability that God gave us to choose good 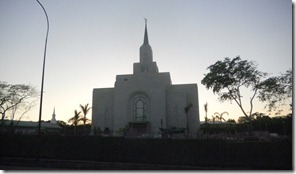 . He didn’t give us the ability to choose bad. We have no right to choose it. And he kind of just went off on that apostasy for a second to a member of the first quorum of the seventy, in front of half the mission. Quite funny. Elder Falavela just stared at him for a second and then was like, “Okay, thank you for that, but does anyone ELSE have an idea of what agency is?” It was great.

Another funny story: A lot of mornings we get up early to play soccer as the office. On Tuesday Elder Huaman had to get up early to drive President somewhere, so we decided to get up at 5 to play. My leg was still pretty messed up (more on that in a minute) so I decided not to, but I still woke up. We all sleep in the same room on bunk beds, and Elder French 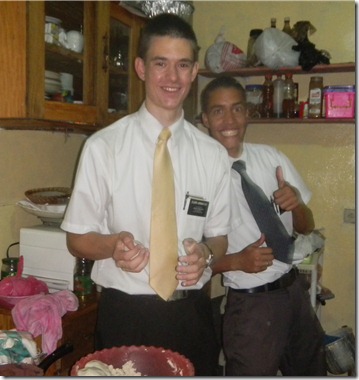 started getting everyone up, and he and Elder Vasquez opened the door to go downstairs and heard a really creepy noise from downstairs. It scared them, and they ran back into bed. Then those two, Elder Huaman and Gonzalez were talking themselves into going for like half an hour. Finally, Elder Huaman decided that he’d go to the bathroom and then they’d go. While he was in there, we heard footsteps running across the roof, but not rat type footsteps. Like actual ones. When he got out, they opened the door again, and the noise started again, but louder. I can’t even describe to you how fast they shut the door and jumped back into their beds. They were done. Not worth it. That’s a quite funny story, until you realize that our house really is pretty haunted. Elders have literally seen ghost-like things walking around (especially on the roof. That’s a common one) and just strange stuff happens. President has even come a couple times to re-dedicate it. It’s like a serious thing. But there you go. Cool story, Hansel.

Quick note on my leg: While it was healing, I didn’t want to get blood on my pants, so I wrapped it. What that did is make the scabbing grow into the gauze I used, so every time I changed it I literally ripped off everything that had healed and it started over. And the pulling of the gauze on my wound got me to a painful point where I could hardly walk. It hurt worse than any similar injury I’ve had in my life. But then I gave it some time to heal without the gauze, it scabbed over, and now I hardly notice it. Also cool story, Hansel. 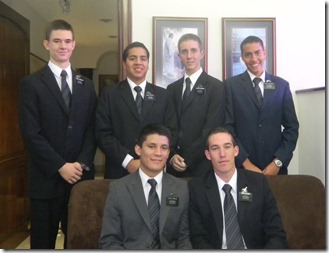 Since people are leaving the office, I got the chance to have a dinner with President to farewell them. It was super nice. Free, nice dinner, and I was next to president and his family, so we talked all night. It was super fun. President is a really chill guy when he’s not cutting our heads off for something. But this week he also came into the office super mad about something and took our heads off for it. Actually, it wasn’t anything that I did, or any of us there, so we didn’t get beheaded, but he was very worried about this issue and very, presidenty. He also told us that if he found out that we had told anyone outside of the office what happened, he would find out, and we would be sent home. So you don’t get to know. Sorry. Just know that the Elder that actually did something is very sorry he did.

Also, there are suddenly two Elders living in our house for the next few days. I believe what happened is that they did something really stupid, and they’re waiting there until President decides whether or not to send them home. Their suitcases are there, though, which is a bad sign. Really, it’s rough to see things like that happen. But they do.

So that’s mostly it. We found out that the office is moving to Santa Ana at the end of May, but just so we can get to know the area before the new president comes. I will officially be the only general secretary on Monday, after which Elder French will be leaving. And I get to go get my license today, which is about four weeks after I wanted to have it, but still it’s cool.

I’m sorry if I forgot to answer any questions, but I have to go. I have an email to president to write. I love you all!

Note:  Remember the story about the so called “legal contract” about a flash drive and a frosty?  See the Feb 18th post “Week 3…”.  Here are the pics from that.  Note the “notary” signature by David. 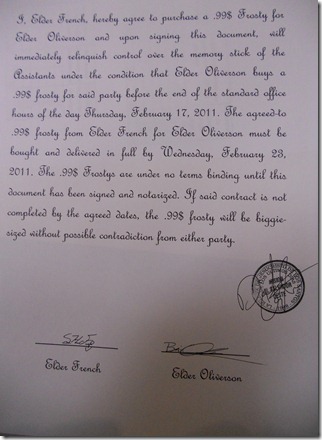 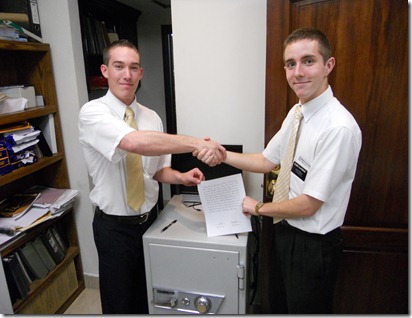