Week 5 in the Mission Office

Good email this week, although David does mention that he tried to upload pictures and our server wasn’t working.  Not sure why.  It looked like it worked to me, but maybe there was some kind of glitch when he tried.  Maybe next week.

Be sure and read the addendum below on the “novia” comment…

Subject:  “You idiot. How could we be in a matchbox? Where are all the matches?”

I think I definitely forgot to say for the last couple weeks, thanks for the birthday packages! I totally appreciate the old but still good DVD player thing, which I haven't had a chance to use with investigators much, but likely will next change. Also, all the food you all sent was amazing. And I never knew Propel would be so good. So anyway, thanks for that.

Julie, I apologize for not mentioning the Jack Handys in my last email. I didn't have much time to actually get on and write. Let me tell you, though, I printed those off and me and Elder Oliverson read through them together. It was hilarious. We are still quoting them. However, I didn't see a couple key ones that I thought I would. I noticed the one about the guy telling the long story at the airport about buried treasure wasn't on there, nor was the soldering iron of justice, nor the golden hammer one. I just used nor three times straight. Nonetheless, thank you very much for those. They definitely made my day.

Here's a couple funny conversations Elder Oliverson and I were remembering that I didn't tell you about:

“Hey Elder, could you equip this plate with a tortilla?”

“Would you like a regular tortilla, or a tortilla with plus one resistance to fire damage?”

“Hey Elder, you know what would be God's greatest Christmas gift to me?” 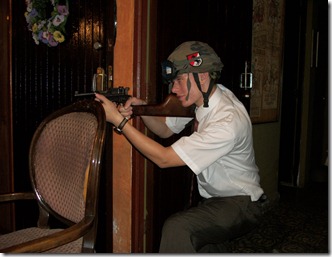 So this week I got a little bit more comfortable in the office. I think this coming week it'll basically just be me running the show, and Elder French will just kind of sit around. The one thing I'm still worried about is not having my license. I was supposed to get it the first week I was here, but the office Elders are kind of baggy since they'll be leaving soon, so it hasn't happened. As of now, I just need to give my current license to the lawyers to do something, which will take a few days to do, and then I can get it. But we can't start that process until Monday. Which means that, if I'm lucky, I'll get it two days before Elder French and Elder Vasquez leave. Not much time to learn the area at all.

“WIDESCREEN! Left side: brrrrrrrrrrrr. Right side: brrrrrr... hey, what? What are you doing there?” “Oh, I've always been here. In fact, I think I'll live here.” “No, if you lived there you'd have a lot less non-broken bones, and more crushed spirits.”

We found a new investigator this week named Gustavo, I think. I don't completely remember. We taught him at this one member's house, which was good. He actually seems really positive. He's fifteen, and his brother got killed by gangsters a few years ago, so he had some questions about the plan of salvation. We taught him a little about that, but mostly focused on prayer and how we can get answers through it. We committed him to pray, and he accepted a lot more solidly than most investigators. We left him a pamphlet and a “soft” baptismal challenge (When you get an answer, will you get baptized kind of thing), which he accepted. Cool beans. The only kind of weird thing is that this lady that was there kept saying weird things. For example, Elder French (his comp had some stuff to do with the assistants, so he was with Elder Vasquez and I that day) was explaining to him something about prayer and testifying, and the spirit was great, and while he's in mid-sentence the lady jumps in and says, quite loudly, “Hey Elder Arrington, that bread that you're eating is called a novia.” Wow. Thanks for the FYI. There were also a couple points where she would mention doctrine that we weren't planning on teaching that day. Like Joseph Smith, outer darkness, who Moroni is, etc. It made the lesson a little harder, but it was still good.

Elder Falavela (I don't know how that's spelled) from the first quorum of the seventy came to give a couple multi-zones and meet with president, so on Tuesday president told us to have the office spotless and leave early so they could meet in there. We worked super hard and got it super, super clean and organized. We put the nice chairs in the conference area, we swept and mopped the floor, organized the books and boxes, threw away trash, etc. We basically redid the whole office. And got our normal work done. And left two hours early. And you know what thanks president gave us for our effort? He decided to have the meeting somewhere else and never saw it. That's lame. But we had the multi-zone with him yesterday, which was really good. He talked a lot about agency and obedience, and I think just the way he said things made me understand them a little bit more, and want to apply them. So there you go. That's a little growth there. Also we learned a few ways to get more referrals and such. It was good.

“And then I saw his hanky. I mean, he's not snarling. He's sneezing!” 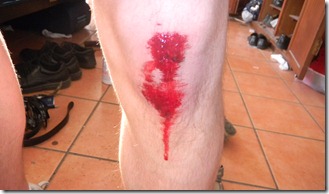 That's about all I got today. Oh, but this morning I went to play soccer with the office Elders, like we do sometimes, and it was fun. They play on a concrete court thing, though, so it's a little lame. The point is, I was running to get a pass and shoot, and one of the Elders pushed me a bit, causing me to step on the ball, roll over it, across the ground, and into a ditch. My knee got pretty scraped up and I had blood dripping from it, but I just got up and kept playing. Because that's how much of a man I am. I took a picture of it and was trying to upload a few others, but the server seems to be down. But let me tell you, showering with that afterward was fun. It definitely took my mind off the cold water.

Thanks for the weekly updates and emails and such. Also, that is horrible about BYU, but that really will give us some more publicity. As a missionary, I tend to think that the more people see us and think, “why do they have those super strict rules” the better. Also, that means that they won't go win some huge national title while I'm gone. They should wait until I get back.

I love you all, and am super happy that James is finally home. The talk, by the way, was really good and insightful, but I think I either don't understand or don't agree with a couple parts of it. I want to listen to this thing that Dad sent me, though. Maybe it'll clear up a couple things.

“I have never said heck you son of a gun.”

I can't even type it right.

Dave Frogley adds this clarification:  Hey all, just a quick note. The fact that the bread David was eating was called a "novia" is (I believe) supposed to be funny/ironic because "novia" means "girlfriend," "fiancée," or "bride."

To which David actually responds again:

Also, funny note about that: This is the conversation that sprouted from that (In Spanish originally)

"Hey Elder Arrington, did you know that bread is called a girlfriend/bride?"

"Oh. I didn't. But I guess I now have had more girlfriends here than in the states."

"And the bread that Elder Vasquez is eating is called a prostitute in most areas."

"So I've got a girlfriend, and Elder Vasquez is stuck with a prostitute. Fantastic."

It was quite funny, but as I explained, kind of at the wrong time.

I know just what he means.