Yep, David performed his first baptism already.  As he would say:  Crazy!...

Sorry this email is coming so late. I was having trouble with the computer earlier, so I just printed off all your emails to read and then come back to send the emails. I still don’t have long to write. And sorry about the whole apostrophe thing. I just can’t find it on this keyboard. It’s in the Spanish layout, but it says it should be right here, but it’s not. So I use that key anyway. 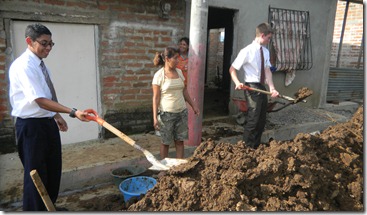 I just uploaded a bunch of pictures, and you’d better enjoy them. There is now actual proof that I’m in El Salvador. Crazy! The first few pictures are of the Hernandez family, one of the families that we contacted. They were adding on to their house, so we went over for four days to help them shovel the dirt in. There was a ton of it, and it was hard, but I have to say, I worked dang well. So as much as it pains me to say it, thanks Mom and Dad for my work ethic. I do have to apologize for the quality of the pictures, though. I gave the camera to one of the daughters, and she took more of Elder Reyes, and the ones of me are all weird. It’s hard to monitor the quality when you aren’t taking the pictures. There’s also a picture you all should enjoy, especially Mom since you wanted a better picture of me, of me, Elder Reyes, and Mauricio at his baptism. You may notice that I am also dressed in white, because I did the baptizing. More on that later. But it’s a little bit funny to me that nobody besides little kids in El Salvador ever smiles for a picture. They will seriously be laughing and having a great time, and then you pull out a camera and everyone is dead serious. That’s why Mauricio looks that way. And Elder Reyes is smiling, because I guess people in Guatemala do that.

We only found a couple new investigators this last week, and for some reason we could never get a hold of our investigators. Henry is really moving along great because we’ve been reading the scriptures with him every day. He knows a ton of the doctrine, and he always asks really great questions. He had a drug problem before, and still says that when he hangs out with his friends, if they were to offer some to him, he’d take it without thinking. We helped him build up some strength against that, but a law just got passed that says that (I’m not sure exactly how it works, but oh well) if he hangs out with his old friends, they can all get arrested and sent to prison for eight years. It has to do with them having tattoos, because a bunch of them lived in the US before, but here tattoos mean you’re part of a gang, which isn’t good. But anyway, he’s already done five years and doesn’t want to do more, so he’s been staying away from his old friends. So those temptations won’t come. What a blessing in disguise! Even he told us that he’s frustrated by this law, but he thinks it’s what he needed to really turn his life around and help him through this to baptism. Cool stuff. 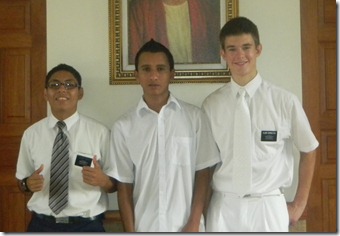 Like I mentioned earlier, we had a baptism on the 19th for Mauricio. For some strange reason, he asked me to do it, so I did. Crazy, right? It all went really smooth and the service was really great. The only weird thing was that when I actually baptized him he tried to lift up his feet, which means we had no balance and kind of fell over. It was really somewhat embarrassing, but the witnesses said it was good, so it stands. Also, the 19th was Mauricio’s 19th birthday. Also cool. And one more dang cool thing: Ever since we’ve started to teach him, he’s been asking us questions about how he can become a missionary. He has to wait a year before he can go through the temple, but after that I think he’s ready to go. He sounded excited and wants to go out and serve. That’d be so cool. We’d be in the field the same time.

Sorry I forgot to mention how many Elders I live with. Up until this morning it was six in our house, but two of them, Elder Perry and Elder Campos, just moved out to a new house. Elder Perry is a gringo that came in the same time as me, and Elder Campos is from San Salvador and has been here a while. The other two Elders that live with us are Elder Martinez, who’s from some Central American country and has been out a month, and Elder Winters, a gringo that’s been out about six months. It gets pretty crazy around there. Or did. I guess it’ll be a lot quieter now. I’ll try and send pictures of them next week.

As far as transfers go, I think they just tell us and we go. Or at least that’s what I think it is. I haven’t heard much about it. But even if we do go to San Salvador, we don’t ever see the Greenies. They come in a different day than transfers. Like a day or two before. Which reminds me, if you can get a DearElder or something to Sam, it’d be great. I just need him to know that when he gets here he can give the package to the assistants with instructions to get it to me, and they should put it with the mail that we have at the mission office so my Zone Leaders can go pick it up. I think that’d be the most effective way of getting it to me, since I have no idea when or if I’ll see Elder Duzzett here.

Kind of sad thing I wanted to say really fast: An Elder just recently got excommunicated. And he lived in our house just before I got here. Apparently he messed around a little too seriously with a female member, and the President found out, so he got excommunicated and sent home. He lived in San Salvador, though, so it wasn’t far to go home, but he just within the last couple days moved in with this member in our mission boundaries. I don’t know where exactly, but that’s kind of a weird situation. And it’s really sad. That Elder just threw all of this away for something that’s probably not going to last very long. All of you should know that I am not going to do that. I’m pulling through the whole two years, and I expect a dang big party when I do.

Really quick note I forgot. I finally got mail. What happened is that the Zone Leaders go to San Salvador to pick it up every week and distribute it, but for the last few weeks we haven’t been able to ride buses because of bomb threats, so they never picked it up. That’s all cleared up now, though, so I got it. So everyone in and out of the family who wrote to me, I should have it.

So there’s life here. Sorry if this one isn’t as long as some of the others, but I didn’t have too much to say, anyway. Dad, as always, thanks for the family updates, and I love this new quick upload thing on the family server. Much easier. Mom, I finally got your two letters, and on the same day because of the thing I mentioned, but I loved getting them. They’re kind of short, but good. And I loved your journal introduction thing. Very scripture-esque. Emily, congratulations on your splurge. That’s awesome! I just had one as well, since we’re given 180 dollars every month for food and such, and for most Elders that’s about right after all their expenses. For me, I lived by the famous Dad-ism (that I’m sure he stole from someone) ''The rich have lived like others won’t so they can live like others can’t.'' So I hardly spent any money this month, so today I had 130 dollars to spend on groceries. I spent 40, which bought a ton, and am using the rest to live like a king for the next couple weeks. Great feeling, right? Lindsay, I can’t think of much to say to you. Have fun playing Texas Hold'em with MY stuff? Stacey, I appreciate your diligence in keeping my list for me. I’m assuming that one of the two must-see movies is Inception, even though you didn’t specify. Oh well. I’ll find out in twenty one months. Weird how I’ve been out over three months. That’s one eighth of my mission over already. Julie, keep prepping for the baby, as should the rest of you that are with child. Michael, I’m glad you like your job. That’s important to have. Plus you’re making money, which is also important to have. Steven, you kick that taller kid’s butt. Yeah, I said that. Thanks again for all your support and letters. I love getting them every week and staying caught up on everything. And one more cool thing for Mom and Stacey since they reminded me: I’ve written in my journal every day of my mission. Woot for me!