And here’s David’s letter from September 6, 2010.  We’re getting more pictures, and several will be embedded in this email (yea!).  On some of the pictures you can click for a higher-resolution version.  David is also getting more settled as demonstrated both by his passiveness to annoying bugs and his frustration with annoying companionship…..

The subject on this week’s email is:

I doubt any of you got that reference. Except maybe Michael and Steven. Maybe Stacey and Julie as well.

So here I am again, typing a little letter to all of you. It´s been a crazy week, as always, but it´s been good, too. It´s weird how time moves here. It doesn´t feel linear. When I´m out working, it feels like forever. Then we get home at night, and it feels like I haven´t been out very long. When I think about home, P-Day seems forever away, but it still feels like P-Day was yesterday. Really strange. 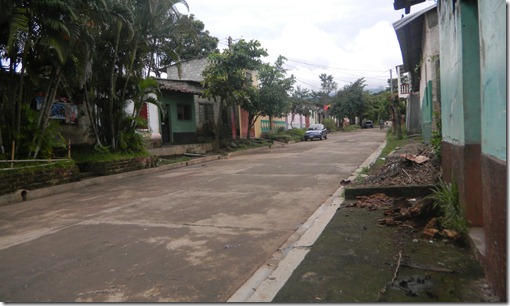 First, I should answer some questions. The weather here isn´t really that bad. It gets dang hot, and I´ve been told by several people that this city is the hottest part of our mission, but it usually rains, so it cools down pretty good. I have to say, I´m getting used to the cold showers, bugs everywhere, constant state of damp, etc. The language, though, is a completely different story.

When I got out of the MTC I could speak fairly well, I just was´t very confident talking to natives. That´s gone now. From the beginning I´ve been able to contribute to lessons, have fairly simple discussions with some people, etc., but some people here are really hard to understand. They just slur words together and mumble a lot. Especially old people and drunks. (By the way, there´s a lot of drunks here, especially on weekends. Quick story: We went to teach a lesson at a less-active member´s house and a drunk outside was shouting at us the entire time. It was really disruptive, but we ignored him, and eventually (almost at the end of the lesson), he stopped. After the lesson, we went outside and saw that he had passed out on the street in front of us. Kind of funny) But I´m getting the hang of it, and honestly I can speak much much better than most of the gringos that came in with me, and a lot of people have complemented me on how much I´ve already learned. Of course, it´s just the Lord helping me. It becomes really clear that He is when I lose the spirit and suddenly can´t speak to save my life. 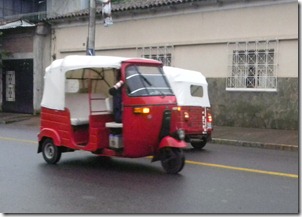 I just started to upload some pictures to the home server. I don´t have very many of the area, yet, (Elder Reyes really doesn´t like it when I take pictures) but I´ll try to get more this week. Also, if I got some duplicates, sorry about that. And Dad, for some reason I have to add them to that list of things I want to upload one by one. Is there a way to fix that? It takes a long time. And as far as your plans about a memory card, I think the hybrid thing would work well, but really I have an hour or two to upload. If I start it at the beginning of my time, it can upload through my email time, and I think it works really well. But still, I don´t want to upload everything. It´d take forever. But there you go. In the pictures I uploaded you should be able to identify my bed, a couple mototaxis, one of the four or five 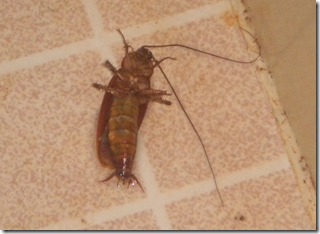 dead cockroaches on the floor of our shower (and those are two inch tiles, I think), and a picture of Elder Reyes in front of our house. Fun stuff.

The work has been progressing this week. We had no one to teach for a while since we were basically out of investigators, so I basically forced Elder Reyes to go contacting with me. He still didn´t want to, saying it´s a waste of time, so we went on splits, him visiting members, and me contacting. I found four different investigators, one of which has a family of seven that we might be able to teach. We have only returned to visit one of them so far, but he already knows that Joseph Smith is a prophet and the Book of Mormon is true. I hate to say I told you so, but... (said in a completely Christ-like way, of course :)) 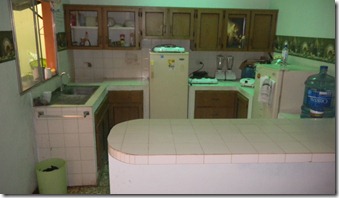 I think I told you a little bit about this kid we started teaching named Mauricio. Two days ago we set a baptismal date with him for the 19 of September, which is a Sunday for some reason. I´m pretty excited. We also started to teach his mom and brother, and they could be baptized, too. Awesome! 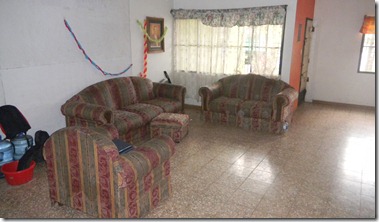 The word of wisdom is a big problem here. Everyone who isn´t a member of the church drinks. That might be an over-exhaggeration, but still. We have a couple other investigators who were getting ready for baptism, but now have to re-overcome addictions. One of them is a guy named Henry. He was born and raised in the states, so he speaks English, but he was part of a gang in Reno, Nevada. 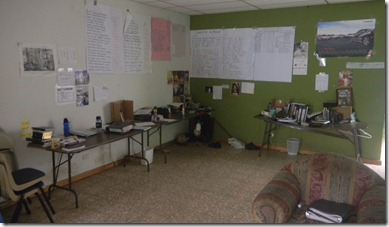 He got arrested and did 5 years in prison for stealing cars and such. Then he got deported to here. He really wants  to change and be baptized, but he´s been having a rough time with it. He said he always feels alone, and never has anything to do. He wants to get a job, but nobody will hire him because he´s got tatoos, and here that means you´re in a gang. We were getting him ready to meet with the Mission President, but just a day or two ago he drank again and smoked marijuana with some friends. 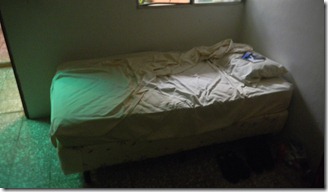 That´s tough on a missionary, let me tell you. But we´ve talked a lot with him, and decided that we´re going to study the scriptures with him every day, and he agreed with it. I think it´ll be interesting to see how that works with him. Hopefully it´ll give him the good friends he needs, and the spiritual help he´s been missing, too.

I get to start teaching English classes on Saturday. That´ll be interesting. I have no idea how English actually works, so we´ll just have to hope I can teach something. It´s really just to find new investigators, though. 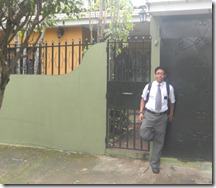 Hopefully things will start to work out well as these new investigators start working out. Success breeds success, right? Still, I appreciate all your prayers.

It´s good as always to hear from you all, and the developements with Max Hall and the BYU football team (now separate entities) was really interesting to hear. I´m excited to see what it´s all like when I get back. Hopefully Heaps will still be there. Quick side note: in the computer place I´m in right now we´re listening to Beauty and the Beast in Spanish. Crazy. 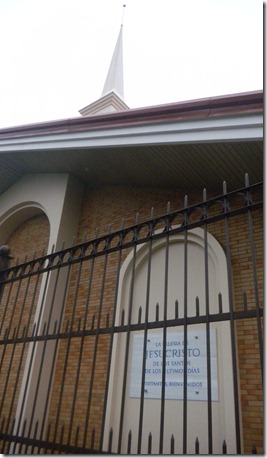 Well now I´m running out of things to say. I loved the pictures you all sent, and hopefully mine are decent as well. None of them are attatched here, I just got them all up on the server, so maybe Dad can put those on the blog or something. Congratulations Mom for being up and about again. I´m glad to hear that´s getting a lot better. Dad, your updates are by far the most frequent and detailed, so I really appreciate them. It´s great to hear about the family, and your advice and council is always awesome. A lot of times I forget you served a mission once, too :). Boys, you´re both awesome. You´re getting stuff done, and Michael, you´re getting a job, so things are sounding good there. Congrats to you both. I still have yet to get something from you two, though... Lindsay, it´s good to hear you´re alive as well, and I thoroughly enjoyed your email. I literally LOL´ed out loud at a few parts. Emily, I hope you´re still doing great, and that Kathryn´s talk on Sunday was good. Stacey, you underestimate my power! Don´t try it! (get THAT reference, if you can) Clearly I am more clever than you thought. You tried to trick me with a name that was highly unusual, but, as with the Monkey house game that one day at work, I have risen triumphant. Julie, your emails as well are highly entertaining, and I always appreciate them. Thanks for all the encouragement, and your missionary efforts. That goes for the whole family, by the way. All your support is really what keeps me out here. That, and my testimony of the work. But trust me, the support goes a long, long way.

I hope you all have a great Labor Day! They don´t have it here, but I hope it´s relaxing there. And tell the Shafers I said hi!