Michael’s focus is impressive.  He seems to be working hard and his investigators are becoming more diligent. That's what it's all about, right?

This week, we sent Michael our new family picture.  This pic includes everyone in the family, and to represent Michael, we included King Julien from Madagascar.  He’s photoshopped right into the picture.  Now, that’s fun.

Speaking of pictures, we got one of Michael.  He’s the tall one.

If you don't know what that's from, try reading it "in a lower register". 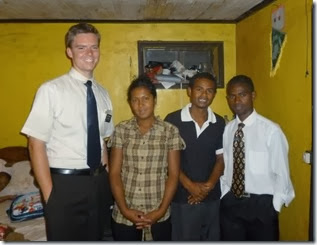 So... some of you may remember our investigator named Benjamin. Yeah, he totally drop talked us this last week. Out of nowhere. We had come to his house on Monday, and he wasn't there (apparently off drinking). They couldn't learn on Wednesday, and when Friday rolled around, Benjamin sat us down and just said, "So I've been thinking about what you guys have been saying, and I think I just want to stay Catholic." What??

We tried asking his wife and 25 year old daughter what they thought, since they had actually been reading and diligent, but Benjamin wouldn't hear of it. He said, "I am the father of the household, so what I say goes. Don't bother asking them." I hate hearing that. And it's unfortunately common here.

By the way, Benjamin's wife and daughter just stared at him angrily for the rest of the night, so we're pretty sure they were on our side.

On the bright side, however, Benjamin said that he would read the Book of Mormon later and let us know what he thought about it. So that made us a little more happy, and we secretly committed ourselves to check up with him now and then to be sure that he's reading.

Back on the downside, we've bumped into Benjamin twice since that lesson, and he's been drunk both times. So... we'll see where that goes.

And let's slide back onto the bright side. Toky and his wife are still learning really well, and they loved watching the Joseph Smith story. That's right. We showed them the movie. As soon as it ended, Toky said, "turn it back to when the angels show up!" Well, they're not just angels, but okay. The idea that God the Father and Jesus Christ showed up to Joseph Smith, and not just angels, is difficult for people to understand. But the bottom line is: they enjoyed the movie, and understand the Restoration better than before.

And they keep promising to come to church. They had some responsibilities at their own church this last week, so they "couldn't come to God's true church", but they are planning to come this next week.

They are also good friends with our branch mission leader, Mamy, who goes with us to teach them three times per week. Sweet. Elder Stokes and I got a couple pictures with them.

And speaking of church, Solo and Bodo finally came! They have been way diligent at reading so far, and promised to come to church last week. And then they didn't. Apparently one of their kids wouldn't come to ours, and said that they wouldn't go to church at all if the parents didn't come with them. That's the spirit, eh? Especially since this "child" is currently married and living on her own.

Anyway, that was the problem last week. But we talked to them about it, and they promised to come! And then they actually did! Elder Stokes and I were pretty happy about that. And just to make everything even better, the branch president went up and met with them right after sacrament meeting, all on his own, and then a member couple swarmed about Solo and Bodo and just befriended the heck out of them. Our branch may be small, but it's powerful as... King Jake? I don't know how many of you remember (or ever knew) the Packard's cat, but that was one royal little furball.

Suffice it to say, Elder Stokes and I were very pleased with how the branch accepted in new people. Now if we could just get the rest of our investigators to come to church too!

There was one family that I was pretty concerned about, because they met us one time and "haven't had time" to meet again. Their names are Onja and Tolotra, and one of their moms. Ones of their mom. One of theirs mom? How do you say that?

The couple seemed really interested, but the grandma is the one that always answers the phone and the door, and keeps telling us that they don't have time. So we figured that she just didn't want the family to learn.

Then, yesterday, she opens the door and just lets us in! And what's more, she had read the pamphlet that they had been given, and we talked about it. And then set up a return appointment when the whole family can be there.

We were really concerned that they would just not learn anymore, but it looks like they might keep going! Which makes us really happy. Goodness knows that we need more families to teach.

Last note about investigators. Jaona is that giant kickboxer guy that threw his beer in my face. Fortunately, he has been consistently not drunk all the times that we have gone to him this last week, and his family also enjoyed watching the Restoration video. Jaona kept looking back at us and nodding in agreement when the voice of the film said things like, "I knew that God could not be the author of so much confusion."

We keep committing him to come to church, but he keeps pushing it off. But we'll get him in the end.

That's pretty much all I have to say for this week. We are working hard, and our investigators are starting to be more diligent. That's what it's all about, right?

I love you all, except for Elder Stokes....

PS: We love the family picture. A lot.