In a fit of senioritis, mom and I got so caught up in our trip to Utah (BYU vs. Utah game, Grandpa Arrington’s birthday, and other distractions) that we were late writing to Michael this week.  Oops.  That can’t happen again….

Michael on the other hand, sounds really good!  Great things going on, and a new experience with a new (and I mean NEW) companion.

Other than that, things are going pretty well here. Elder Ranomenjanahary officially left for Mahajunga, and got there safely. Apparently the water where he lives got cut off somehow, so he's been calling me trying to get me to tell the mission to help. It seems that my work with that man is not yet done. 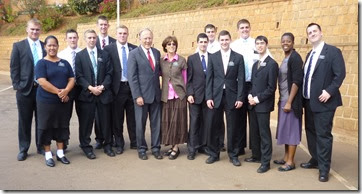 Which brings me to our next, exciting development. My trainee! There were 15 new missionaries in this new group, including two sisters. Keep in mind, my MTC group has four missionaries, so this is a pretty big strength to our force. About half of the trainers right now have only been in country about three months, just long enough to have finished the "12 Week Program". New elders training new elders.

Anyway, it's a big group. After lots of meetings in the morning, we got to the point where all the new missionaries go up, one at a time, and read a letter that tells them where they will serve, and who their trainer is. 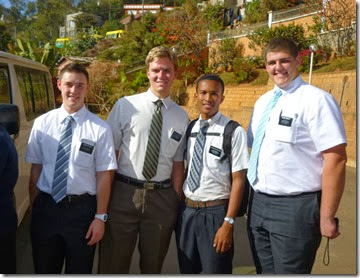 Right when they called up the first new elder to read his letter, I sat back and thought,"I should be safe for now. There will probably be at least six or seven before my name is called." And what did that first elder read?

"Elder Stokes, after prayerful consideration the Lord requires you to serve in the Sabotsy Namehana Branch, with your trainer, Elder Arrington."

So that took me by surprise. But Elder Stokes is a great companion. So far he has shown himself to be diligent and outgoing, even trying to talk to somebody on his first bus ride. The guy turned out to be drunk and refused to speak anything but French, but hey, it's the thought that counts.

I feel like the only thing really holding Elder Stokes back right now is... me. I keep dominating our lessons, which makes it really hard for him to participate. I just feel like I can teach better than he can. But he needs to learn just as I did. So he and I have a plan, and soon, we will execute it. 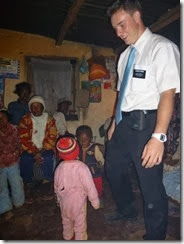 But it's good. We're studying well, and trying to help him develop his teaching skills. So far the only thing he's done in a lesson is give a spiritual thought about 1 Nephi 3:7 (multiple times), but hey, I did exactly the same thing when I first came in country. Teaching is hard when you start out, most especially when it's teaching in a new language.

As for our actual teaching, things seem to be going pretty well. We taught Josoa and Nirine once again, and I'm not quite sure how to deal with Josoa. He keeps talking about baptism, pretty much telling us that once he understands that, he'll be willing to get dunked. Interesting! His wife seems less enthusiastic though, so we're trying to help her be more diligent.

We also brought Josoa to church yesterday. We came to his house a little early in the morning with our branch mission leader, trying to help them get to know each other. And it seems to have worked. Josoa had a good time at church, and we'll be stopping by his house again on Tuesday to teach him again. But now we've got him a friend in the church. 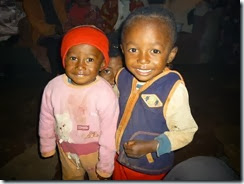 Looking through Wednesday, we taught two women, both of whose husbands don't learn. The one is just out of town usually, but the other one has told his wife that he is just fine in the FJKM church, and doesn't need to learn from the missionaries. Well, my good man, you actually do!

We taught him once when we first found them, but never since then. I just want to talk to the dang guy so that we can sort this out, but he is never there when we come by! Honestly, I think he is there some of the time, but runs away when we show up. I mean, our whole goal as missionaries is to help you grow closer to Christ! Why is that not something you want??

We've set up a couple lessons with him, but always get dogged. I think we'll just focus on the wife (Brigitte) and their kids. Hopefully the family will set a good example and the dad will want to follow. 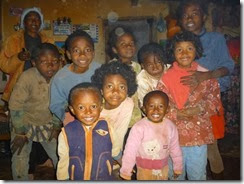 We also taught a guy named Faniry, who we were planning to drop talk. To make a long story short, he opened up to us during the lesson and could turn into a really good investigator.

We also have some pictures this week. There's all the new missionaries with President and Sister Adams, a family that we teach (the two little kids had started running circles around Elder Stokes for some reason, which was pretty cute), and then Elder Stokes, me, Elder Razafimandimby (my old companion), and Elder Morley, another of the new missionaries. Elder Morley is HUGE.

Anyway, a big thank you to everybody that had a chance to write this week. And to those of you that didn't, I'm sure that you have VERY good excuses (which you will explain in next week's letter).