How about a trip to the zoo!  Well, sort of.And of course a lot of great missionary work.  And a new companion is coming.  And we have pictures!

Subject:  "I thought you were all tied up." "That's because you are stupid." 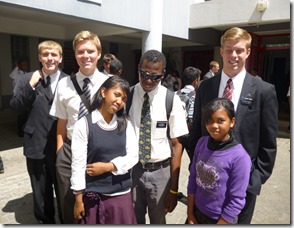 As we all seem to realize, the days are going by fast. For me personally, I keep going through the week thinking things like "I can't believe I still have four days before I can tell the family what's happening here!" And then Monday comes and I'm like "wait...

what was I going to tell them again?" Mondays through Sundays fly by, but that Sunday-Monday gap seems to erase all the interesting things from my brain.

Fortunately, we did something interesting today! Elder Ranomenjanahary is going home this week, and really wanted to stop by a lemur park before he left. So we talked to the other elders in our house, and all four of us went to a place called Ambohimanga. 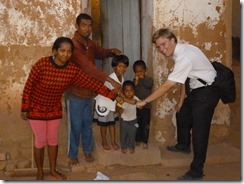 To skip past the ridiculously long bus-ride, we got to the final stop on the bus and started walking through this FANTASTIC scenery. It was a half hour walk to the park, but I still loved every second of it.

Anyway, we showed up, and found out that it was the most ghetto zoo ever. Guard rails: no. Guards: no. Locks on the exhibits: no. They did slap on a stick to hold each of the doors shut, but still. It was ghetto. 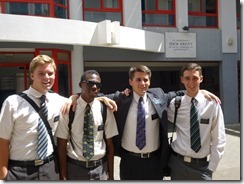 Which was actually a plus. Because of how ghetto this park was, we not only got to feed lemurs by hand (again) but I also got one of them to climb on my back! That was a pretty interesting feeling. I imagine that it's something like what Emily feels whenever she carries Marie.

Actually, Marie is probably walking by now, now that I think about it.

Or at least crawling at a professional level. 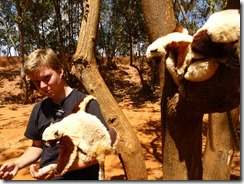 Another plus of the ghetto-ness was their crocodile "exhibit". Again, a stick held the door shut, keeping the two medium sized beasts at bay.

And I was pretty surprised when our guide grabbed a stick and started slapping the crocs, trying to make them more interesting for us.

Then, he opened up the afore mentioned "stick-locked" door, and let each of us walk INTO the cage and wack away at live crocodiles' faces.

Cuz there's NO WAY that could end badly. 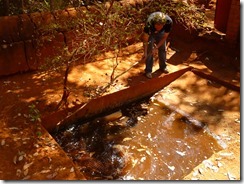 Basically, we had a great time. And we took pictures.

Other than that, things have been going pretty well here. Kind of. We have a bunch of cool investigators lined up, but everytime we go to their houses they have some kind of meeting to get off to or something. So we set up another return appointment. Hopefully we have a pretty awesome week ahead of us.

And we're also trying to fill our time up by hunting down some less-active members. We found (through member help) a 17 year old guy named Rindra, who is the only member in his family. Apparently he went inactive because one of his friends, named Giovani, is also a member, but stopped coming to church. Rindra says that he's totally willing to come back to church, but he wants to get his friend back to. 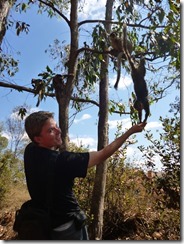 So we stopped by Rindra's house this last week, to get to know him a little bit. After we asked him to pray, he prayed. Straight to Jesus.

Which means that we still have some work to do. Elder Ranomenjanahary and I explained how we are supposed to pray, and had Rindra try again.

Once again, straight to Jesus. We gave him 3 Nephi 18 to read, and decided to come back later to help him out more.

We also (through member help) found another less-active member named Eugene. He's a decently old guy, but his mind is still sharp as a #2 pencil. And he seems to still be a pretty good member. The only reason that he is inactive right now is some problems that he has with his legs. When we first stopped by two weeks ago, he was lying his bed, unable to slide over to a chair. But we shared a spiritual thought, and he asked for a priesthood blessing, which we then gave, and went on our way. 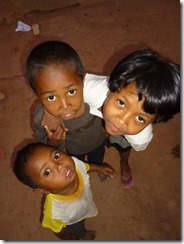 A week later, we came back to find Eugene not only sitting, but standing! He still has trouble going long distances, but he's planning to start going back to church. Way to be, Eugene.

One last story. There's been this investigator named Joely since I first came here. Her daughter has been baptized, but Joely can't because of a marriage problem. And honestly, her husband hasn't really been helping her. Or progressing as an investigator. Or being helpful at all. But in our last lesson, he (Hery) was totally different.

Being drunk probably contributed to him being different, but it also helped us figure out how to help him. Hery usually just doesn't talk when we come over, which makes it really hard to help him. However, after a few drinks, he opened up and started asking about the Plan of Salvation. It seems that he really wants to know about what's coming to us after we die. Well, we can answer that! 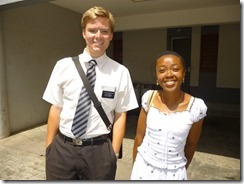 So there you go. Sometimes God sends the Holy Ghost to help you understand your investigators, and sometimes He just has the investigator get drunk and tell you for himself. God works in mysterious ways, right?

So things could possibly be looking much better here in Sabotsy Namehana. Investigators are looking more diligent, members are making plans to come back to church, and I'm watching the District (Preach My Gospel training videos) when I get a chance. I doubt many of you have seen it (I wouldn't either, if not for being on a mission) but the missionaries in it are WAY good teachers. Just one hundred percent by the book, Preach My Gospel. One thing that Elder Ranomenjanahary and I have been focusing on is NOT teaching about the Restoration the first time that we meet with people. 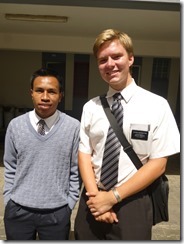 The way I was trained was usually "teach them as fast as you can". And that's pretty much stuck with me so far. But studying Preach My Gospel and the District (and the talk by Elder Alvin R. Dyer that Mom and Dad sent me) has helped me understand that that might not be the best way to teach. Avoid overloading them with doctrine on the first meeting.

Get to know them, explain your purpose, share a spiritual thought to slap them with a little Holy Ghost and help them make a commitment, and bounce out. As Elder Dyer explains it, a person's salvation will not depend on how well a missionary presents facts and explains scriptures. It WILL depend on that investigator feeling the Spirit so that they will want to make commitments and progress.

I'm not sure why I told you all of that. Just rambling, I suppose. But there you go. When a chance comes up for you to teach investigators, now you'll know how to do it. 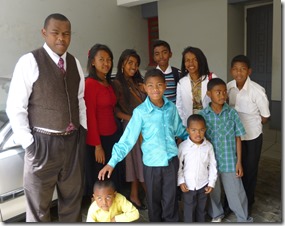 And we have some other interesting news. As some of you may recall, Elder Ranomenjanahary (my current companion) is a mini missionary, which pretty much means that transfers will leave me with a new companion. We got the transfer news yesterday morning, and found out that I will not only be getting a new companion, but I will be getting a NEW companion. Elder Arrington will officially be training a new missionary, starting this Thursday. This means two things for us:

first, I'm scared out of my socks. Second, I'm going to email my trainer and ask for help. And anybody else out there with advice, I'm always ready to listen.

Anyway, thank you all for your love and support. I'm doing my best out here to represent you all.

PS: If you send any missionary advice, type "Missionary Advice" right above it. It will make it easier for me to find later on.

PPS: Emily, this is a totally random note, but I seem to recall you joining a Bible study group a while ago. How's that going?