Week 8 in the MTC

Michael will spend 9 weeks in the MTC, but this letter will be his last from there.  He leaves on Monday morning as you will see from the pictures below.  And yes, he did send pictures!  Not that they’re pictures of anything particularly interesting, but I’ll include some just because he described them.

This letter is particularly interesting because he describes his “investigators” who I believe are volunteers there just to help train the missionaries.  But he describes them as real as can be.  They have some successes, they have others that, well, not so good….

Next time we hear from Michael he will be in Madagascar.  Well, not really.  We get a phone call from him sometime while he is traveling there.  Maybe SLC, maybe Chicago.  We’ll have to wait and see….

Subject:  "Yes, you know, opposites attract? In this case, there was a library, that also sold beer." 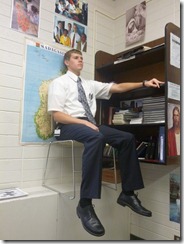 Well I'll just describe the pictures quickly. And I have no idea what order they are in. And I just forgot which ones I put on.

One of them is Elder Hamm, my companion, sitting like a king on a chair. On a vent.
Another is a white board drawing that I made of Gaston, from Beauty and the Beast. Notice his large muscles and authentic jacket buttons. 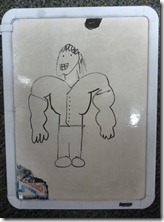 I think there's also a picture of a chalk board. I drew Elder Horne's dad (the one on the left), Elder Hamm (more like the Joker), and what was supposed to be Catwoman riding the Bat-bike. Gladiator Chad was drawn by Elder Evans, and captures

the essence of our main teacher. And then the far right is Elder Hamm trying to draw Elder Horne's dad. But I think it looks far too much like George Washington. I mean look at his hair!
There's also a picture of a painting of a bird. Which is awesome.

s" skills, so he drew a picture of Moses. Parting my hair. And

the children of Israel walking through.

And there should be my flight plans in there somewhere. That's for you dad. It saves me some time having to write it.

I basically have to go now, so I'll get on again later. 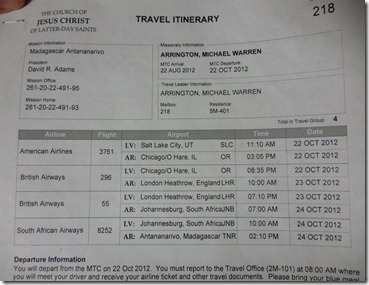 Subject:  "What in our history together makes you think I'm capable of something like that?"

Well, I realize many of you have gotten very whiny, or as you may call it, "wanting pictures of people". Fine. But I don't think the computer I'm on will let me download them from the camera, and my time is running out.

So... I wrote a bunch of things that I wanted to talk about, but I'm not sure I'll get through them all. And there's no real order, so bear with me. Bear. Brother Bear.

First off, for those of you that were wondering, the bat that was doing laps in the gym DID in fact make a second appearance. But it was sleeping. On the ceiling. Which was awesome. But what you may find even slightly more interesting than that, is basically everything else that has happened.

For one, Elder Hamm told me that Elder Bednar would be coming to speak to us last Tuesday (two days after conference), and of course I didn't believe him. For one, we spend ever waking (and sleeping) moment together, and I hear pretty much everything that he does. So I was all, psh! To make a long story short, Elder Bednar came. Booyah.

He (Elder Bednar) also mentioned Elder Holland's talk. Which reminds me that one of our teachers showed us a meme (Julie, you're in charge of explaining what those are to those who don't know - i.e. the p-a-r-e-n-t-s) of Elder Holland. He was just sitting there smiling and the caption read "I don't always give the best conference talks... Oh wait, yes I do". It was pretty fun.

Dad, you've mentioned the "R" word in your most recent email home. Which is interesting. And in spite of the possible "new crops" that you mentioned from the idea of the "M" word (for those of you who are unaware, I am not referring to meat. Mmm... good. Meat), I still expect that to not have happened yet. Or basically ever. That is my expectation.

Yes, this is officially my last P-Day in the MTC. Thank goodness. I'll be leaving for the airport on Monday morning, and I'll be able to call home at least once. From an airport. I haven't decided which one yet, but it will probably be from SLC.

And it seems that Steven has been doing pretty well in his football awesomeness. And make sure he knows more songs to play on the piano than Praise to the Man!

And now, back to me. First off, lets talk about me investigators. Keep in mind that none of them are real (YET)

First we have Lalaina. He and his wife used to fight a lot, but we've been working that out pretty well. He also smoked, drank (drinked?), and chewed a ton of tobacco, but he started working himself off of those before we even knew about them. He's been doing pretty well, but he can't quite seem to quit smoking. So in our last lesson with him, we wrote out a plan for him. He told us that he smokes about 6 cigarettes per day, so now we've started to limit it to 5, then 4, 3, and so on. I'm going to guess that you all know how the rest of those numbers go.

Second up is Tojo. He's been progressing really well, with no real problems that he lets us know about. He basically just accepts everything without any issues. Which is kind of nice, but I also have to wonder if he's hiding something. That little Tojo.

And now Miandry. The Bane (BOOYAH) of my existence. I don't know why, but whenever I start a lesson with him, my brain falls out. Everything I've ever known goes away. Which is depressing. On a more depressing note, we received a letter from Miandry yesterday, just before we were supposed to teach him, that he had moved to take care of his grandma. He wasn't sure when or if he'd be back, but he said it was nice that we had been willing to teach him and we should have a good day and such. The little jerk. Not really. But seriously, apparently that actually happens in the field. Since pretty much the only thing the people own is what they wear (and sometimes their house) they'll just look around one day and say, "do you think we should move?" "Yeah, why not?" And within a day, they're gone, never to be seen again. Crazy.

So then we (Elder Hamm and I) went "tracting" and met a new investigator. His name is either Roja or Rajo. I'm not really sure. He makes tables and desks for the FJKM (Jehovah's Witness people), and only let us in when we explained that we would preach the from the Bible (don't even try mentioning the BOM). Anyway, we got inside, talked for a minute about Christ and his reign, the apostasy, and mentioned that we have living prophets on the Earth today. That peaked his interest. And then we left. Always leave them wanting more.

Anyway, I'm running pretty low on time, and I can't really think of a language lesson right now anyway. So... be excellent to each other!

Time for me to go, be ready for a phone call sometime between Monday and Wednesday of next week, and just keep working hard!