Week 3 in the Mission Office

As background, this message was preceded by a number of emails from the family articulating that little James De Rurange was back in the hospital ICU in critical condition.  It was a somber time for us all.

David is settling in to his office assignment, learning the ropes.  He also uploaded some pictures of the office.

Subject:  “The Cheat always freaks out when he sees a bear holding a shark.”

Wow. I really blew it. I spent basically almost forty minutes reading your emails, mostly because I was simultaneously trying to upload pictures. And my keyboard spacebar is broken, so it's really weird to type. So sorry if this is short.

The news about James is pretty horrible. I was kind of surprised in a not good way by it, but it sounds like everything that can be done is being done. Including, apparently, robbing my mission fund. Thanks for that. Actually, as I was reading from Julie that the kids were 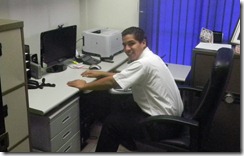 getting money together I told myself I would tell you all to take that out of my account. It looks like you know me perfectly. I will also, of course, start a fast after lunch today for him. Let me know if there's anything else I can do from thousands of miles away. That I can do next week, because unless you tell the Duzetts to tell Sam something in his Monday email to call me to say, I won’t get it until then. 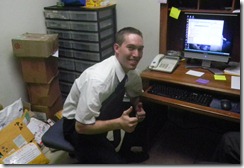 For me this week was much less eventful. I'm still getting the hang of the office, but it's been really fun. I'm pretty on top of things, but I still just don't know some of my jobs. But I will soon. The only things of note that happened this week in the office that I have time to talk about would be that we got super ahead in our work, so I'm feeling pretty good about it. We kind of mess around there, though, and one day Elder Oliverson needed a USB drive from Elder French, but he wanted a frosty in exchange for getting him it, and then Elder Oliverson wanted one in 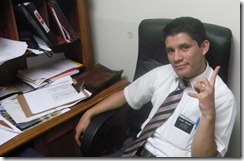 exchange for buying him one, and so we got together and created a totally legitimate contract, notarized by me. We even got pictures of the signing. I could totally be a lawyer. However, now Elder Oliverson and I have been conspiring to get me one, too, so we scanned the contract and basically Photoshopped it so I get one from Elder French as well. On Monday we'll go in and reprint it, switch it with Elder French's copy, and grab his camera so we can Photoshop the pictures we took as well. We're diabolical. 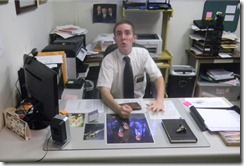 My investigators are kind of not really there. We really don’t have much time to proselyte, so it's a little rough. More than anything we're teaching the Vega family, who read the Book of Mormon occasionally and have come to church before, but don’t want to come back because they don't have any fancy clothes. That's something that people have a problem with, here. No shirt and tie, no dress, no shoes, etc.

I did actually upload some pictures this week. They're mostly of the office. There are a couple of the place that we played soccer this morning. It was the first time in over six months I've played on a non-concrete field. Anyway, the room in the office where everyone is is mine. The guy at the computer, if I remember right, is Elder French. The other one in a chair is Elder Vasquez, my comp and the migration secretary. Elder Oliverson is the one at a computer in the other room, and he's

the records secretary/really funny/seen almost the exact same movies that I have/that includes You've Got Mail, which we quoted for like half an hour one day/he's even seen the Tenth Kingdom. Oh yeah.

This could be the start of something great. Elder Huaman (pronounced Wa-Mon (like pokeMON)) is the financial secretary in his own little office. The Peruvian. Also, There's a picture of Elder Gonzalez, who came into the office the same time as me as the new migration secretary.

Okay, everyone is getting ready to go, so I'm going to head out soon. Thanks for the emails and such, even though I don't have time to thank you each individually.

Oh, and Julie, I have an assignment for you that might make you laugh, so it's doubly important. Elder Oliverson and I were talking about how funny Jack Handys are, since he also knows those, but we need a

list of them. So would you mind emailing me some kind of massive compilation of Jack Handys?

I love you all! Tell James to get better, by the way.

And Elder Ballard, my ZL, says hi. And so does Elder Campos, my other ZL.

And the other day I used the word harom in a sentence. Don’t I feel educated.