David surprised us with a letter on Friday.  Why, we might ask?  From what I gather, Friday is now his Prep day.  We had kind of settled into a system, and now everything changes!  Ok, we can deal with it.

The pictures below are from Atiquizaya taken mostly during the last week when he was there.

Let’s hear about his new responsibility as Mission General Secretary…

Subject:  Well isn’t that a pretty picture. Santa rolling around in a Panzer! 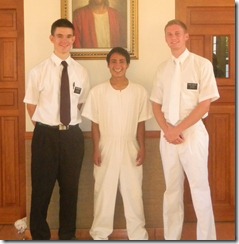 So, I have a couple of things I should talk about before getting into the meaty stuff. First, I have no idea why the email got to Sarah before the rest of the family. I always write to you all first, and then with whatever time (if any) that I have left, I write to Sarah. It was just weird I guess. As far as the iPod and the music and stuff go, I noticed that the music folder is now on there, and I would encourage any and all to add music to it. The iPod still hasn’t showed up, and at this point I think it’s just gone. Kind of lame, but there it is. It’s also great to hear a little bit more news about James, but since it’s only been a few days since I last wrote, there weren’t many updates. 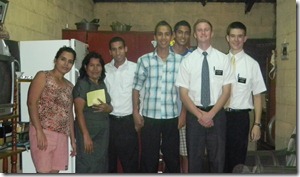 Now I have a lot of things to talk about. As you all should be aware, I had changes this week. It was a little rough and unexpected, since that meant that two new Elders would be coming into the area without anyone to teach it to them, but they ended up coming a day before I left, since that’s when the new Elders come in, and one of the Elders in El Angel now was training him. So I took them to at least enough places to get them started, I think. And then Wednesday I got on the coaster and came to San Salvador. 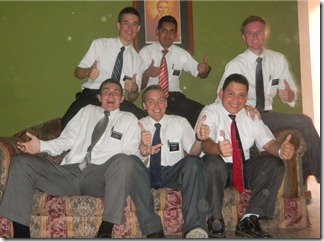 I am now one of four missionaries in the Monserrat, Los Heroes area. That’s pronounced los err-oh-S (like the letter S), not los hee-rows. Monserrat is basically how it looks. Unfortunately I don’t have any pictures yet, but I’m uploading a bunch of older pictures and goodbye pictures from this change. I’m kind of bummed to leave all those missionaries and families, but oh well. It happens.

I basically got to work asap with Elder French, who while not my comp, is kind of my mentor. My Yoda, I suppose. Apparently, while I’m at the office, we don’t really have companions. We just all work. And from what I hear, my companionship will get a cell phone, I will drive the car way more than anyone else, and I get my own office. Sweet perks. 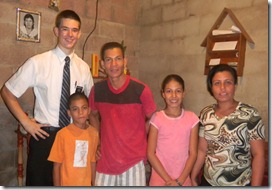 This week I’m still just starting out, but I’ve been put to work. We needed to create some letters with pictures of the new Elders and the president to send to their families, basically letting them know that they’re okay and who their new comp is. So I did that, both in English and Spanish, for all the new Elders. I sent them to president and got them approved, and then we sent them out. Very exciting. As a luggage problem.

I also got to cut up and laminate a bunch of little mission-standard card things, call some people to get or give referrals, and the like. Yesterday we went on a Lyco run, which I’m sure stands for something, but I don’t know what yet. We just drove out into the East mission to stop by the distribution center and the post office, where we picked up people’s church material orders and mail, respectively. I like picking up mail, so I think I’ll enjoy this. 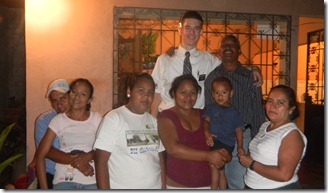 Things at the office are actually pretty busy, and there’s always deadlines coming up. For that reason, I guess, a lot of days I will be heading in early, staying super late, or some mixture of the two. For example, today, P-day, we had to go in for a couple hours to finish those cards and run them to a zone leaders meeting in Santa Tecla. But normally I should be leaving the office around 4 or 5 to go to my area. It takes about forty five minutes to get out there, and we have to take a few buses, but I think I like it. Of course, this is my first big-city area, so everything is really confusing, but it’s kind of cool. My comp is Elder Vasquez, from Guatemala, who is also the travel secretary. We went to visit a couple investigators and almost set a date, so that was cool. I also visited two members, and between the two of them got five referrals. That’s a lot better than in Atiquizaya. The only kind of rough part is that, as I said, we leave late and get there later, and in order to get to the house in time we have to leave the area by 8. For those of you at home doing the math, that’s between two and three hours of proselyting on a normal office day. I do get to work all day Sunday and Saturday, though. 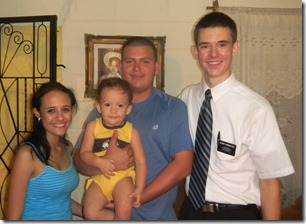 The house I was living in in Atiquizaya was really nice. I don’t know if I told you all that. Most of the other houses are way smaller, way dirtier, and just worse. The fact that we even had the ability to hook up hot water was ridiculous. The house I’m in right now is the assistant`s house. It seriously puts the house in Atiquizaya to shame. Two full floors, four bedroom, four bathroom, washer, dryer, TV, garage, etc. It’s super nice. But, of course, it has to be. Nine Elders live there. And we’ve got two extra beds for when visitors come (seventies, for example). And we have a room literally full of mattresses, because when new Elders come or go, they sleep on the floor downstairs. That being said, the house is really unorganized. Not really dirty, just cluttered. No big surprise there, with how many twenty year guys live together. 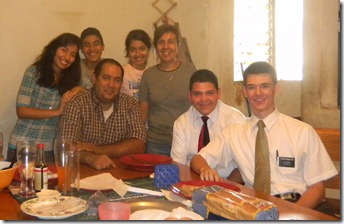 San Salvador is big, but it’s also really nice. A lot of people here are really rich. And we have almost all fast food places I’ve ever heard of. But no Taco Bell. Last night I was hungry, so me and Elder Oliverson, the records secretary, ordered some McDonalds and had it delivered. We were going for Pizza Hut, but we barely called too late. Well, they closed early, because it definitely was not nine thirty yet.

There’s also a lot more technology here. And there’s several pretty big malls. I’m writing in one right now, and its soooo much better than before. The internet here is ridiculously fast compared to the Cibers I was writing at before. 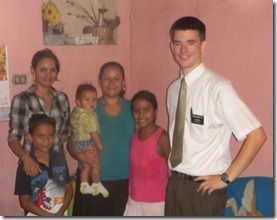 What else is there to say? I’m not sure that I can check this email account more than every Friday, but it might be possible. I can, in fact, listen to music at the office, and my computer has speakers. I’m not one hundred percent sure that there’s a way for me to get online, though, since there’s probably some kind of internet filter system. We’ve only actually used the internet so far to access the mission database with all the missionaries’ profiles, so I have no idea if I can go to anything else. But we’ll see. Worst case I can just copy the music from here to a thumb drive (there’s a lot in the office) and listen to it there. 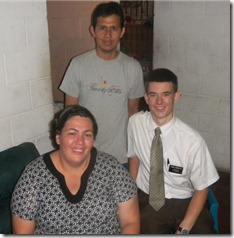 Alright, that’s about all I can think of talking about. I’m sure I’ll remember something later, but it’s going to have to wait until Friday. Thanks again for all your support. I’ll try to let you all know more about the work I do there. I’ll have plenty of time to do it. Office Elders are there for a long time. Elder French will have six changes there, I think, by the time I take his place. That’s like nine months.

PS: Stacey, if you’re up to it I have a job for you. I listen to a lot of classical music in the car while we’re driving, since it’s the only radio station allowed, and I wanted to get better at recognizing what era the music is from, what style it’s in, what kind of orchestra it is, where the recessatives are, blah blah blah. All that stuff. So if you have nothing better to do (You don’t. You’re a stay at home mom with a helpless child that is only capable of minor neck control) you could throw together a review sheet of basically everything we learned in Music 101 and send it to me.