The final letter from the MTC….

A visit to the temple results in an, um, encounter with friends from home…..

Note that the pictures in this post are actually scans of some photos David sent us a few weeks back and are in no way connected to any chance encounter, whether fictional or not.  Stacey got after me for not posting them sooner….  The last picture is him with his district, the first and second are standard missionary pics from the MTC.  The third pic, I really don’t get.  What is that about, anyway? :-)

And finally, the time has come: David is getting ready to leave the MTC.  Here’s the details and his final letter from there.  Note that Dallas Texas is Central time, two hours later than PST: 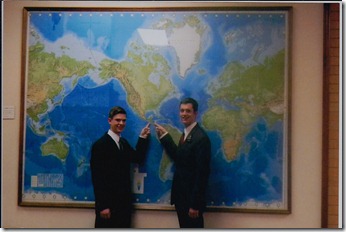 It's official, I'm leaving this place. This is my last P-Day here. I fly out on August 16, 2010. Awesome. Here's my itinerary: I have to be at the travel office in the MTC by 3:00am, and my flight for Dallas, Texas leaves at 6:00am. I'll arrive at 9:35am [that’s 7:35am PST], and have a six hour layover. Awesome. My flight to El Salvador will be at 3:40pm [that’s 1:40pm PST], and finally I'll arrive in San Salvador at 6:05pm. I will have a long time to call home, so this is awesome. Please know, though, that all of these times are in different time zones, so I don't know what the Oregon time will be during my layover. Please figure that out and be ready, because this is going to be awesome. And really fast, just let me say that I am so ready to get out of here it's not even funny. I'm excited to finally get to work! 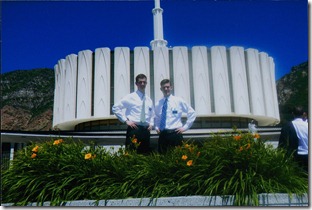 So, something kind of happened today that was kind of crazy. We went to the temple this morning, like always, and for some reason we couldn't get into the session we were supposed to get into, and initiatories were full, so we had to wait a bit to do a session. It finally ended about half an hour after we were supposed to be at lunch. So I'm a little hungry, but not really upset (I don't think you're allowed to be mad at the temple), and I walk outside and see this fantastic view of the valley over the fountains in front of the Provo temple, and I was feeling really great, and started walking down the stairs. And almost right into the Fotheringhams. Wow. Apparently they had come down because Melissa was having a baby, and earlier today that actually started, so they dropped her off at the hospital and decided to wait at the temple. Where we randomly ran into each other. That's a little crazy. We talked for a minute or two and shook hands (ONLY shook hands...) and I introduced them to Elder Millett, but really I was too surprised to really say anything. Seriously I was dumbfounded. Still, it was really nice and actually encouraging to see them again, and I'm glad I was blessed with that chance. We handled it very well, I think. I just hope they don't feel too bad. I think President Fotheringham might have. 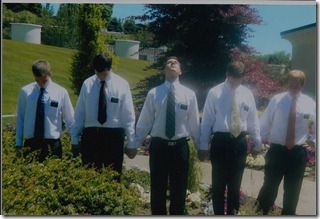 Now about this past week. I finally got to see the new Joseph Smith movie, which of course was fantastic. Every other time it had been scheduled, it got cancelled and the District 2 was put in it's place. We were all glad that didn't happen. I think we deserve to see it after being here eight weeks. My studies are going well, but I haven't really been teaching as much lately. The TEC gets booked pretty fast, and Elder Millett and I didn't make any more appointments, so there's basically no way to do it now. Spanish has gotten a little bit frustrating lately. I think what keeps happening is that we'll learn something new and feel really cool, but the more we get used to it, the more we realize how much we use it wrong, so then it gets frustrating. It's also a little rough because I can easily teach the first few lessons in Spanish, but whenever I try and talk normall 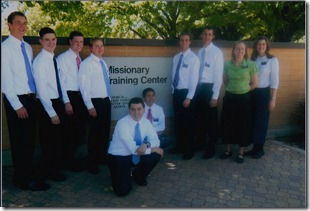 y it's really hard. I just don't know the vocab, I guess. But I'll have time to learn that in the field.

The gospel is amazing. Unfortunately I don't have anything new right now to share, but that's only because I can't single anything out, not that I am not learning. Every day I feel closer to Christ. I think most of it is due to the environment. It'll be interesting to see how that changes when I'm not surrounded by thousands of missionaries.

Steven, I always start with you because you're the youngest. I love to hear that you're winning races, just don't let it go to your head. Or maybe you should. If your head gets bigger, you might grow a little (OH!). Michael, I'm glad you're enjoying your time off of school and scouts, but really you should take advantage of that time. Find something that you've always wanted to do or get good at, and every day make progress toward it. That's for both you boys, actually. Julie and Dave, I'm always happy to hear from you, and I guess it's fine if you prefer to take the advice I give to other family members. Whatever works. Stacey and Kyle, koalas are really is expensive . That's the best I can say on that topic. Also, I'm glad to hear your parasite can do a back flip - that's something I've wanted to be able to do. Also, if I don't get it right this time, I'll have it by the time I call during my layover. I'm dang dang close, even if it doesn't seem like it. Lindsay, you and Mike are the silenter type, but I'm still glad you're pulling through. And Emily and Dave, thanks again for that Spanish lesson thing. It's taught me a few things much clearer than they'd ever been explained to me before. They should teach this stuff! Mom and Dad, I love getting your letters, even the ones that are really short and just about how much Dad loves sound equipment. Keep     writing, and I'll talk to you on Monday. by the way, after Friday at 12:00pm, you should all just email me instead. DearElders don't come on Saturday, so Friday night is the last I'll get them. I love you all! Thanks for being such a great family. I think there's only been a couple days that I haven't heard from one of you, and I love it! I'll try to live up to your expectations and be an awesome missionary. I know that if I trust in the Lord and work hard, He can make it happen. I love you all, and I'll email you when I get to El Salvador!!!