This week was actually Michael’s 21st birthday.  Congrats to him!  It sounds like he spent the day watching general conference and coloring pictures…

Subject:  "You're very good. But she needs a lot of work."

General conference! It always takes a couple of weeks for us to get to watch it, but it came and our Mahajanga branch watched it this weekend. That was pretty fun. I'll admit that I spent a good amount of the last session drawing pictures with some four year old kids, but that seemed more reverent than letting the kids get rowdy so that their parents start yelling. Honestly, adults are way more annoying than kids sometimes.

Like you'll be teaching a family and the kids are sitting on the ground, drawing pictures of them meeting Jesus, quietly singing to themselves. And then the parents start screaming at them to "shut up while the white guys are preaching!"

We have to tell some parents that freak out during lessons to just cool their jets, since they are more of a disruption than their kids.
But it also makes me grateful that I was "born of goodly parents". Mom and Dad, thank you for having been patient with your kids (especially me) and setting such a great example. We certainly didn't make it easy for you, but you raised us well. Thank you! 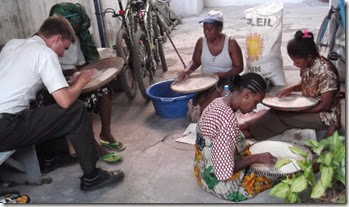 But now, back to business. During general conference our branch made lunch for everybody between sessions, which meant that there was a whole lot of rice there. The rice here isn't processed, so there's always little rocks in it. Thus, people "mitsimpina vary," or cleaning the rice, which involves pouring the rice into large, flat dishes and pulling out the rocks and things. Quite a painstaking job, but most Malagasies do it at least twice per day, for their entire family. I tried it a little bit, and found out that I am also grateful for clean rice.

(I also cook rice here, but it's packaged, and thus it's been processed, so I don't have to worry about mitsimpina vary!)

Our teaching has been going pretty well. Haja (that barber that I said is named Hary) is progressing nicely, along with his co-worker. It seems that every time that we go there some other new person shows up and wants to learn from us too, so it's turning into a good way to contact new people. Go figure. 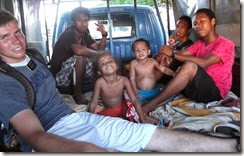 Of course it's not all good. Teaching in a barber shop is still kind of difficult, since the guys that work there could suddenly have to work at any moment. One of the guys was busy the last time we were there, and that made us pretty sad. We try to have them just set apart some time to close the shop so that we can have a focused lesson, but they won't do it yet. So we'll do the best with what we have.

Edmond came to watch general conference on Saturday, and loved it. His wife was sick, but when Edmond left after the afternoon session, he stopped and asked us for a copy of Doctrine and Covenants. I tell you, a missionary's heart jumps for joy when an investigator asks him that! 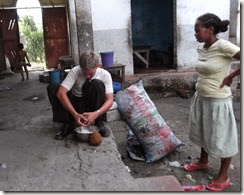 Our bikes have been nice, but it's also kind of a pain. The paths here usually aren't that bike friendly, and finding places to lock them up is especially difficult. Still, it's nice to be able to get to places so quickly. I had forgotten how fast you go on a bike!

Elder Hamm is still doing great. Actually, it's kind of nice to be with somebody from my MTC group. I remember a missionary from a while ago who mentioned that he doesn't like being the senior companion, because he feels like the junior has to accept everything that he says. Suggesting that they go to the grocery store is taken as an order to go, for example. Of course that's not how it really is, and the junior could say no if he wanted to, but the thought is always there. Still, it's nice to be able to see a companion as an equal rather than an assistant or secretary.

So life here in Madagascar has been going pretty good! No complaints, and we're just going to keep plowing ahead until the end!

PS: Thank you everybody for your emails and your wishes!

PPS: I also got to scrape out the inside of a coconut shell. People mix coconut shavings into their rice to make it taste better!

PPPS: We had to hitch hike a ride home after a picnic with the branch last Monday, and the people in the back of the truck with us were way cool!