25 weeks in one place.  That seems like a long time.  Still, Michael is progressing well, is a senior companion and a trainer.  Not bad.  And we have pictures!

Subject:  "You used to be real pretty! You're just not now."

I can honestly think of nothing to write right now. My mind is completely blank. Which reminds me all too much of high school. 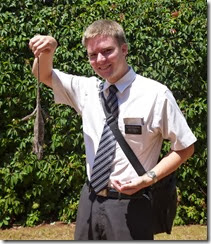 First of all, I did manage to snap a few pictures this week with a chameleon that we picked up as he was crossing the street, a SUPER short grandma that is way awesome (named Jacqline), another grandma that always asks us for candy, and Elder Stokes "chucking his money" (apparently that has some reference in pop culture). It's been a pretty fun week.

We also taught this guy this week named David. David had already learned from missionaries before, but stopped progressing because he didn't have any friends in the church. So we've been working to solve that problem, and it should help him a lot.

That being said, David apparently is fairly lazy. He had asked us to give him some homework to study before the next lesson, which we did. However, stopping by a day or two before the planned lesson, we checked up with him, to see how his studying was going. David then whined to us (and I seriously mean WHINED) about how he just doesn't have any time to read at all, he's so busy with his work, and his life is so hard. I looked at him and said that there is time RIGHT NOW to read, since all he was doing at the time is lying in his bed and watching some TV show with creepy Malagasy clowns (to be fair, I find all clowns equally creepy, regardless of their race).

And he said that he couldn't read. 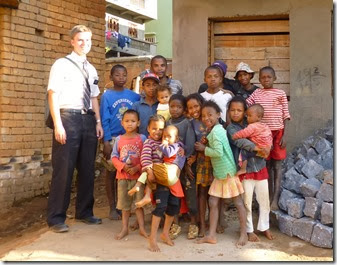 WHAT?? He further explained that God "can't expect us to devote our ENTIRE lives to Him". We have six days to do whatever we want, and the seventh one we can pray and go to church (if it's convenient). Which he also doesn't do.

We had a very interesting discussion about that, but it kind of makes you think. God not only asks for our entire lives (heart, might, mind and soul), but He promises that if you DO devote yourself to Him, you will "find that He can do more with your life than you ever could on your own" (or however that quote actually goes). As we devote ourselves to God, we will find greater joy than we could get from devoting ourselves to anything else.

I also hear that a number of you are working to talk more to people, getting out of your comfort zones. Way to be! Keep devoting yourselves, and watch God bless you. As mom and dad have said, you don't even have to talk about the gospel. Mom just had a nice little conversation with one of her neighbors that was putting their garbage can out. And now she has a new friend!

So there is really no downside. 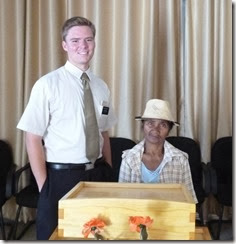 Another person that we taught this week is a nice couple named Jim and Anjarasoa. We've taught them two or three times so far, and they had shown no signs of understanding the whole "one true church" thing. Then, in our lesson with them yesterday, they just understood. Out of nowhere. I don't think it was anything we said, but at the end of the lesson they just looked at us and said, in effect, "so there's only one church that God will accept? Then how will we know which one is true?"

After them not understanding at all, and then hearing this, Elder Stokes and I looked at each other and thought, "so you're telling me there's a chance... yes!"

Dad also mentioned an idea to help those people that don't understand that very idea, which I want to apply this week. What we were doing before obviously wasn't working, so we might as well try a different approach.

One final note on that. People will sometimes take a doctrine that we teach them and assume that it is doctrine in their own church. After we explain the Plan of Salvation for example, they'll say something like, "our pastor never explained it like that... but now we get it!"

So do you believe that the LDS church is true? 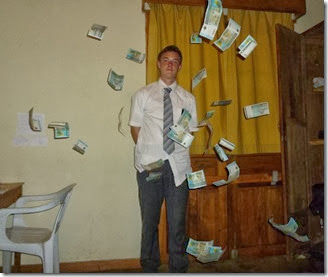 One other thing that we've been focusing on is not trying to find a hundred new investigators, but getting more use out of the ones that we have. Preach My Gospel says to contact investigators every day. Considering how spread out our investigators houses are and how few of them have phones, that's not really feasible. But instead of visiting an investigator once a week (and them not being there half the time) we are trying to go to each house at least three times a week. We also try to stop by anybody whose house we happen to pass by, just to say a quick hello if nothing else.

We've also started giving candy to investigators that complete their homework (thanks to some advice from David) and I think it's helping them. They get candy and salvation! Can life get any better? I submit that it cannot!

Anyway, that's about all I have to say for now. Thank you all for writing, your advice and your love. Keep up the good work.