Week 4 in the MTC

This week we get some pictures!  And two emails again!  Here we go first letter:

Subject:  "Better a silly girl with a flower, than a silly boy with a horse and a stick"

Well, it's another Tuesday. As if you didn't know that. I think we can all agree that these emails are the greatest part of everyone's week. 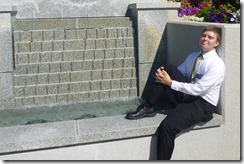 Now I realize that some of you have gotten very complainy regarding pictures. Dad you left some very good instructions on how to send them using Internet Explorer. Unfortunately, the browser here at the MTC allows us access to LDS.org and mormon.org, and that's about it. Which is still pretty fun. I watched the CES fireside by Elder Holland a couple days ago, and that was fantastic. That and the celebration of President Monson's birthday are awesome. Definitely watch them at LDS.org.

Where was I? Australia. Yes, Australia! (from the Princess Bride, since it seemed kind of unclear) Anyway, the point I'm making there is that I can't send pictures to the thing. But I'll try to get a few off in this email. And I'll give some... descriptions? Of the pictures? Yeah. That should work.

I don't know why, but words have started to just not look right anymore. I tried to write "we rely on the Lord" a while ago, but I couldn't figure out how to spell "rely". So that's sad. I had to change it to "depend". 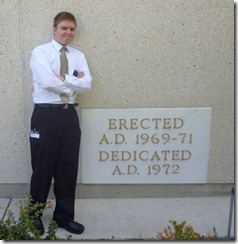 Hm... I never know what to send in these things. Why, you ask? Well, hear a lot of people saying things like "I can't wait for you to get to Madagascar!" or "It should be great once you get out in the field!" People never really wonder that much about the MTC, mainly because it's learning for like a million hours a day and then sleeping two. If you're lucky.

I think I've figured out the pictures, so there's five or so on their way. They should be: a chalkboard picture of my group riding a T-rex drawn by Elder Evans (starting from the left, it's Elder Evans, Elder Horne, myself, and Elder Hamm. I'm holding a spear. Also, remember that the whole picture is about ten inches across, so it's pretty tiny), a couple pictures of me at the temple (pondering deeply), and they have pictures of other Madagascar missionaries doing their work in some of the buildings around here, so there's a couple pictures of those pictures. That should be fun. And then the last one is a white board drawing of one of Elder Hamm's and my battles (we see who wins the most. Usually he does). He got a bunch of twinkies in a care package and didn't want them, so in the drawing he's running to them. Unbeknownst to him, I've laid a trap for him to fall onto pointed traffic cones. (I'm EA, he's EHM). We've also made a bunch of stop-motion video things, and some are pretty awesome. Unfortunately, there's a lot of pictures, so I can't send them right now. And mom, I'll try to get some of the group and significant things like that.

Oh yes! I just remembered apostles and celebrities (I just had to ask my comp how to spell that. Weird). Basically, my district has been playing this game to see who can find the most people that look like celebrities, and the most elders with apostles names. So I've seen Elders Monson (I know he's actually a prophet, but bear with me), Nelson, Cook, Holland, Ballard... and a bunch more. I think Bednar and Christoffersen will be the toughest ones. As for celebrities, there's a guy who looks EXACTLY like Mr. Incredible. Spot on. And another that looks exactly like Tom Hardy. For those of you that don't know who that is, go watch Inception or the Dark Knight Rises again. He's awesome. Anyway, I'm going to see if I can get pictures with both of them.

Well, other than that... a language lesson? Here's a fun fact (that I hope I haven't given you already). Take the word "mianatra" (meaning "to learn"). In Malagasy, most (if not all) active verb forms start with the letter M. You can add the letter P after the M, and it is defined as "someone who does that". "Mianatra" becomes "mpianatra" (student). Fun right? But wait, there's more. From here, you can add "ma" to the beginning, making it a verb again. The "ma" turns it into "to cause it to occur". Therefore, "mpianatra" becomes "mampianatra" (to teach). But that's still not all! Remember the first thing I said in this? Since this is now an active verb starting with M, you can add a P just after the M, making it "someone who does that" yet again. "Mampianatra" becomes "mpampianatra" (teacher). From learning, to student, to teaching, to teacher. Think about that. Another example is "maminany" meaning "to prophesy". Add a P and it becomes "mpaminany" meaning "prophet". It's fun. Right now they're focusing a lot on teaching us rules like this so that we can learn to make our own words. We just learned how to make transitive and intransitive verbs from a root verb yesterday, and maybe I'll send that to you another week.

Anyway, I should really be going now. I'll try to get on again later today, send me questions and things if you have any, peace out, and stay awesome,

Well it's been another few hours. I like sending off two emails, because it gives me a chance to address things that I've probably missed in the first one.

First off, Mom, yes, I did get your DearElder messages (the one that said it was a test and the one that talked about the stake day of service fiasco, and maybe another one). So DearElder is pretty solid on getting the messages to us, even though it might not send back the confirmation emails sometimes.

As for life at the MTC, it's been pretty much the same. A few changes have been made, the most significant of which is probably that I am now the district leader for the four Malagasy missionaries. Since we're about halfway through our stay, the branch presidency figured it was time for a change. You may recall that Elder Evans was the previous district leader, and now he and his companion (Elder Horne) are the zone leaders. As fun as all these responsibilities sound, it basically just means that we go to more meetings and talk about how our district (or zone) is doing. It's been really weird. As the district leader I'm supposed to interview all of my district, one by one, and then report to the zone leaders on how everybody is doing. So I interview Elders Hamm, Evans, and Horne, and then report to Elders Evans and Horne. Odd. It's also been kind of annoying. Since I'm the district leader, Elder Evans suggested that I let Elder Hamm make most of the calls for our companionship (he IS the senior companion now anyway). He has no other real leadership thing, and we don't want him to feel... suppressed or anything. Which is stupid because when ever I try to talk to the district or make an announcement or something, the zone leaders try to act like they can trump me. Which they could under other circumstances, but not in district meetings. It's just really stupid. Hopefully we'll be able to figure it out.

I earlier mentioned that I work with the "Malagasy" missionaries for a reason. We met another missionary that's going to Madagascar, but speaking French. So that's fun. We'll probably never see him after the MTC, but it's fun to meet people that you can relate to.
Relating to people with which we can relate, there is a sister here FROM MADAGASCAR. I might have already told you about her. Basically, she's from Madagascar, learning English here (although she's already pretty good), and serving her mission in Salt Lake City. So that's fun. We've been learning some Malagasy games and things that we might play with her sometime, since she doesn't really get to socialize with anyone around here. It turns out not being able to talk to anyone is something of a barrier. Go figure.

Let's see... oh yes! I talked about Elder Evans earlier, and here's another kind of fun story. I've been parting my hair (with style) for a while now, and while I was sitting there studying, he walked by and asked "what, did Moses part your hair?" and I was like "ooh!". It was pretty fun.

I've also learned that if anybody brings up Dobby from Harry Potter, I can't stop myself from crying. I don't know what that's all about, but it's kind of freaking me out.

On a happier note, I feel like Brian Regan around here, and not for the reason you might think. I'll be sitting at lunch or something and ask where they're going. And they're all "yeah I'm going to Ohio!" or something sad like that. And I get to be all "I'm going to Madagscar" (I walked on the moon). So in your face. It's like, I'm sure their missions will be very spiritual and all that, buuuutttttt... Madagascar rools. And I say it like that because they don't use "U" in Malagasy. So take that.

On a languagey note, I realize I sent something earlier, but let me add in the alphabet. It's the same as the American alphabet (take that England), but they don't use C, Q, U, X, or... V? Something like that. It's weird trying to remember which ones to not use. Basically they just took out the really obnoxious letters. I mean, have you ever really looked at an X? It's just a wannabe E-K-S. It's stealing jobs from Es, Ks, and Ss everywhere. The little jerk.

Another obnoxious thing is the word "the". Say it out loud. The. That stupid little E thinks it can be said like "uh". Well I'm going to start pronouncing it "thee". Take that.

Well I should be going now, so everyone enjoy your time and PLEASE write back! Time seems to go by really fast now but going a week without a letter from each and every one of you is like looking in the mirror and realizing that you've had something stuck in your teeth all day and nobody told you. Which is not a good thing.

Anyway, please write back, I promise to do my best to respond to everyone (and remember that DearElder is probably the best since it's easier for me to respond to instead of having to check emails during computer time), and keep living the gospel. God loves each and every one of you.