As David approaches the end of his mission, we don’t seem to be getting many pictures these days.  However, we did get some today!! 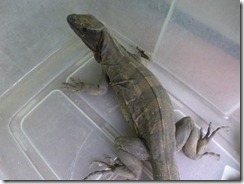 Wow. What a week. Me and my comp talked last weekend, which I think I already mentioned last week, and we found a couple things we could improve on and change, so this week we wanted to be really focused on that. We even completely cleaned the house, rearranged stuff, and just had this good overwhelming feeling of being awesome missionaries, and we were ready for a huge successful week of working harder than we had ever worked before. We were stoked, and it was awesome. And then we got the plague. 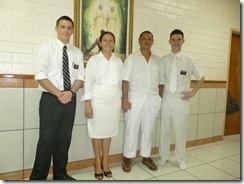 Monday was awesome after P-day. We had some great lessons. Tuesday morning, though, toward the end of comp study, my comp suddenly said that he wasn't feeling very good. We still went to a couple appointments before lunch, but by lunch he was feeling pretty terrible. He had a fever of over 100, so I figured that, if he's feeling so awful, he might as well rest before things get worse. So we spent some hours resting in the house (him resting and me studying), and then went to a couple of important appointments and meetings that night. My comp almost didn't make it. We hurried back home and took his temperature again, which had gone up to 103.2. The next morning he was even worse, which meant that we didn't get to go with the rest of the zone to a special lunch at President's house for having baptized 22 in the zone. All reports agree that it was a great lunch. I'll have to take their word for it. My comp was in bed, with me studying (and doing anything else to stay sane), all day Wednesday. Thursday, he suddenly felt better, so we got to go work, even though most of the day was spent running around the zone doing random zone related tasks. That was the day of our huge stake activity (I uploaded pictures of the theater to the home server). Each ward did a drama based on a story in the scriptures. My ward did the 2000 stripling warriors, and did a great job. The missionaries did their own, which was very clearly the best thought out, the funniest, and the most spiritual (as it should have been), but I 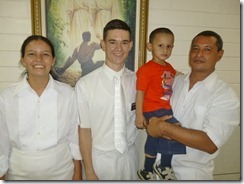 don't have the video yet. We're going to make DVDs of the activity and all of the dramas, so I'll get one of those and we can watch it (you all watching as I translate, that is...) when I get home. So the activity was awesome, but we almost didn't work in our area all day because of it.

Now a little backstory. Elder Duzett's comp, Elder Rosas, got chicken pox, but a special kind of chicken pox that affects people who have already had it once, which is weird. Elder Tuck, one of our ZLs, had already had it AND the vaccination and he caught it from Elder Rosas, so this thing just doesn't care. President got wind of it when he came to the stake activity Thursday night, and then heard that my comp had been sick, too. That's the backstory.

So Friday morning, we're feeling great, finished comp study, and we're getting ready to leave, but Elder Gillette calls with a quick question. We then had to wait for him to call back before we could leave (we're sitting with backpacks on waiting for like fifteen minutes), and President Cordon calls us. The conversation went more or less like this:

"Elder Arrington, this is President Cordon. I heard that your companion was sick, is that right?"
"Yeah, but he's fine now."
"He doesn't have a fever?"
"No, not anymore."
"Did he have a sore throat?"
"No."
"Does he have any spots appearing on his skin?"
"No."
"Has he had diarrhea or anything like that?"
"No, it was just a fever, but it passed and he's completely fine."
"Okay. I don't want you two to leave the house for the next two days, and Saturday night we'll check your progress to see if you can go to church." 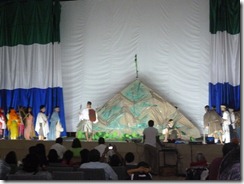 Okay. As it turns out, though, this chicken pox thing has been spreading around and it starts with a fever for a day or so, and then the dots start appearing, at which point one is highly contagious. So it made sense to lock us up for two days. Fortunately, we got permission to take my comp to Elder Duzett's house, where Elder Tuck and Elder Rosas were quarantined, and me and Elder Duzett and Elder Gillette did divisions with the APs, who came for Friday. But, again, I hardly worked in my area, and I spent the night in Las Delicias with Elder Duzett and Elder Gillette. Saturday my comp talked his way out of being cooped up in Castaño in "the cave", so he got out and we FINALLY worked in our area for half the day Saturday. And then Sunday. And that was our week.

Also, the plague has passed on to an office elder and a couple more, so President Cordon is pretty much trying to stop an epidemic. Fun times.

Sunday, though, we had three investigators at church. One was Daniel, that I mentioned before. He is super super positive. He pretty much told us the first time he talked to us that he wanted to get baptized, and Sunday after church we put a date for the 10 with him. It may get moved back, but he's definitely getting baptized in June. He himself said so. Then there was the Tobar family, whose husband is a member. The wife and daughter are also really positive, but it's hard to get a hold of them, so we can't talk again until Thursday. And we almost put a date with them. And then we went and put a date with Jason, the kid that we had passed to Sensunapan but that wants to get baptized in Sonsonate. He's getting baptized on Sunday. 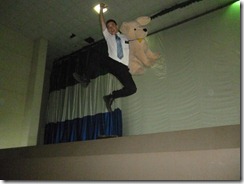 That was not very much about my investigators, but not that much happened this week. I guess that's what happens when the mission is attacked by bio-terrorism in the form of poultry-related outbreaks.

I hope you're all doing great! It sounds like everyone is still alive, and is loving the super busy normal lifestyle. I'm sure I'll figure out what that's like one day. But not yet! Not yet! (Also a quote...).

PPS: I don't have my Oregon license with me, so I'll have to get back to you on that, dad.

PPPPS: I get back before Elder Rasmussen. HA!