Things seem to be mostly back to normal for David, including this whole lizard thing.  Cute, in a reptilian sort of way…  We even have pictures!

It was one of those weeks where some things went great, and others went not so great, and it all averaged out to a kind of medium un-great-not-great week. It was a pretty much average week.

Before I get too much into that, though, I thought I'd respond to dad's questions. Why Raintree? That's a good answer, and I have no response. Except that that is where me and Kent had talked about living. He just confirmed that he is not cutting his mission to make it for Fall semester, so really I guess I could live anywhere. I don't really know any other places, though, so I'll have to leave that up to all of you to decide for me. Put the family council together and get me a good apartment!

And I've grown rather attached to my schedule. That may just be because I get slightly baggy thinking about all of the post-mission BYU attending, but still. Good work to all on that one. Now we just have to find me a job I can start when I get home and we're set! 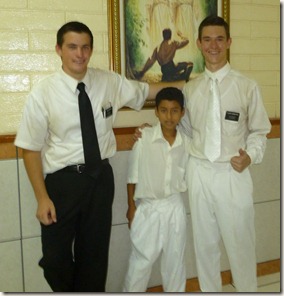 Now back on to the week. It started out pretty good. We were visiting a lot of investigators and such, but it was really rough because we had a bunch of meetings. Monday was P-Day, Tuesday we were gone all day for meetings, Wednesday we were gone for different meetings, Thursday we had a multizone, Friday we had a special temple trip, and Saturday and Sunday we got to work. It was pretty busy, but we managed to find a couple really great families and investigators in that time. One of the families is especially cool. It's the Campos family.

Basically what happened with them is that we had told Elder Gillette, one of my ZLs, that we were going to find 5 new investigators that day, so we were out contacting trying to make that happen. Really, it's not that unrealistic here, we just had to go do it. We decided to go to this place in between a couple colonies to contact since we had never been there. One thing that really helps start a conversation sometimes is to ask for help to find someone else, so we went up to a house and asked where the Hernandez family lived. We weren't actually looking for one, but it got the conversation going. They gave us a couple referrals for people who had talked to missionaries before, and almost as we were leaving pointed out that the house up on the corner might have been where the Hernandez family lived. Or, at least, that the wife's last name might be Hernandez. So we went there after striking out at the other houses, and there was the Campos family. The wife was not super into 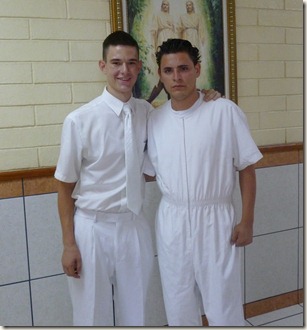 the lesson at all, and the daughter was out playing, so we mostly just taught the dad, and he was absorbing it all like a sponge. He told us about how he had already, through prayer, overcome an alcohol addiction, which was a really cool story. Then he told us that he was going to read what we left him, pray about it, and go to church. Those are the normal commitments we leave with people, so it wasn't that big of a deal, but he was just really interested, I think. The next day we had a special temple trip specifically for investigators. It was mission-wide, and it was great. President had planned a bunch of awesome stuff and even a tour of the outside of the temple and various other buildings (since they can't go in yet). Anyway, we had six investigators go, and the Campos family was three of those. And they loved it. It's also very impressive that they walked all the way down to the stake center to go, too, considering it was a day after we met them, it was early in the morning, and there were no buses running because of Holy Week (it was a good 45 minute walk, then, at least). The wife really opened up on the trip. We went back and talked to just the husband, since the wife was working, and one of the first things he asked us was "How long would someone have to wait to be a member of your church?" Well, we like those questions. He also asked us how we had found his house and explained to us that he had never really gone to a church simply because he didn't know which one to go to. Then he explained that a few days earlier he had had a dream, in which he was on a slope with his wife and saw, down below, a church building. He could only see one side of it, but he said that it looked a lot like the stake center. So imagine that. He dreams that, wants to go to a church, and we show up. I love this country. 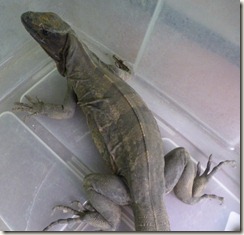 Here's another fun story: We found a big lizard thing in our stairwell one day during lunch. It was trapped there since it couldn't get up the stairs and the door was closed. After a lot of running around, screaming like little girls, and filming it all, we caught it in a giant plastic bin. After lunch we let it go. Fun stuff. It was huge, though, just so you know. It wasn't one of the little geckos we usually have. It was like as long as my arm, and a whole lot faster than we were. But it was kind of cute, too, in a reptilian kind of way. I took a bunch of pictures, but I didn't bring my cable, and we're running out of time, so I have to get this off soon. 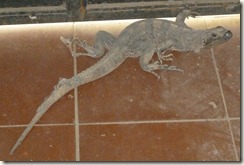 The bad part about this week is that a bunch of investigators had dead dates and had promised they were going to come to church, but nobody did. We even went to invite a bunch, but most had randomly had to work, which is lame. We had only one investigator at church, then, and she was brought by a friend. We didn't even know who she was. This week we'll start teaching her, though. Oh, and Christopher got confirmed and received the Aaronic Priesthood, which is awesome.

That's about it for this week. I can't think of anything else that I am missing, and the ZLs are reminding me that our time is now up. I'll try and get some great stories for next week, since we might have a little more proselyting time (although we will have at least one more meeting in Santa Ana and interviews with President). I love you all! Have a great week!

PS: Would it be bad for me to remind you all that I have nine P-Days remaining? Maybe I'm counting wrong, but I think that's right.