Week 27 in the Mission Office

As always, good to hear that David is in good spirits.  Not a lot of deep news this week, this letter is a little shorter than the last one.  But we did get a couple pictures!

That's not really a movie quote. Unless we have it on home video or something. Does anyone actually know where that song came from? I am kind of curious. But I'm also a little scared, because there was this one time that I was in like fifth grade and I was trying to figure out where this one song came from, and I asked someone, and they told me it was from Barney. Then I felt bad because it was like, "Oh, I guess I watch Barney..."

To clarify, I do not currently watch Barney.

Did I ever watch it, actually? I don't remember what I watched as a kid. Maybe Sesame Street. Or the Muppets. Oh my gosh. Muppet Treasure Island. Epic.

Thank you all for accompanying me down that strange, nostalgic road for a bit. Dad was very right when he said that I'm going to have to load up with a lot of new movie quotes when I get home. I'm running low on them. In my defense, though, I have had to think of two or more per week for the last fifty some-odd weeks. Quite a challenge.

I was at a member's house the other day, who fed us some kind of Nicaraguan pupusa rip-off, and I saw a way-too-short trailer for Brave, that new Pixar movie that's coming out. If I recall from the speech I gave about Pixar at BYU, they were going to come out with a movie called The Bear and the Bow. I guess they changed the title. But it looked very well animated, at the very least. I didn't pick up on any of the story, though. Just so you know that I am mentally (and on paper) making a list of to-watch movies to stock up on those quotes. Also, I saw some kind of deodorant commercial that had clips from the new Captain America movie, which looked interesting, especially with Hugo Weaving. Did anyone see that? 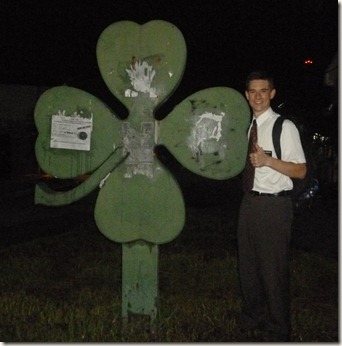 Sorry. Hearing about movies here is really weird. The trailers and posters and such don't usually come out until like a week before the movie is on the street vendors' shelves. And it's even weirder because I won't actually see any of them until after the mission. It's like getting text message updates about a party that you're not invited to. That's kind of a depressing simile, actually. So think of that, but that you can't go to the party because you're out home teaching.

The mission is really weird. But super fun and awesome. But weird. Last night a member called me a, and I quote, "Salty Monkey". I told her that I was from Honduras, (jokingly, of course) and she said, "Oh you salty monkey, tell me the truth." That's just weird. And the day before, I think, we were looking for a reference that had contacted us for an appointment that we had. We only knew that he lived in house number 4 of a certain street. So we went house number 4, but they told us that there were two number 4s on the street. But the entire time, a little ways down the street (it was a very small street), there were these two youths having some serious PDAs whilst laughing at us with a couple of 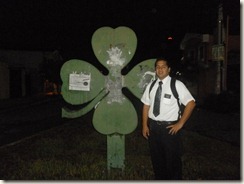 their friends (it happens sometimes when people think that I don't understand them). So we try to go find this house, but couldn't since there were no numbers, so we asked a few people. Where did the house end up being? Of course, it was the one where the kids were hanging out. Dang it. Elder Huaman and I were like standing there trying to convince each other to go ask for ten minutes. Finally we went and I asked them if the guy lived there (Elder Huaman still wouldn't do it). Of course, as soon as I started talking to them they stopped joking. (It's very fun in this country to hear people say something that they think you don't understand and then respond to it. Their faces are priceless). But it turns out that, even though it was the right house, the guy didn't live there. Go figure. 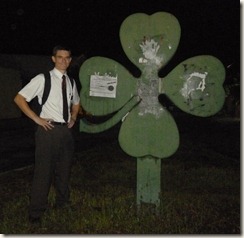 By the way, I'm uploading a few pictures of me and my comp in front of the giant clover that is at the entrance to El Trebol (Trebol = clover in Spanish, for all those taking notes). Also, there's a note that President Cordon's daughters left us in the office, which I thought was funny.

Things with our investigators haven't been moving along quite as well as I would have hoped. Mostly we've been visiting with Corina, Walter, and Noel and his family. Corina has been reading a little bit of the Book of Mormon, but hasn't gotten very far. She's a really slow reader. But we've been talking a lot about repentance, baptism, faith, the commandments, and all that stuff that you talk about with investigators. The last time we went we read together 2 Nephi 32 and analyzed it, talking a lot about how it applied to going to church especially. She still seems really absorbent. That's the best word I can think of to describe her. She just learns and believes really quickly what we teach. But she still hasn't talked to Marvin about getting married (or splitting up if it comes to that), so until that happens we can't really do much. 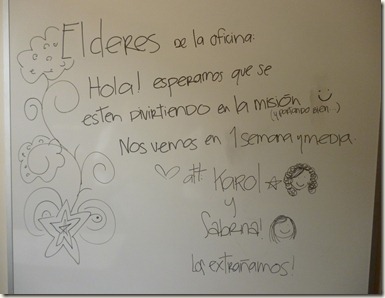 Walter is kind of the opposite. He is up to Jarom, now, in his personal reading of the Book of Mormon. He still doesn't feel like he's gotten a real, solid answer that the church is true, but he's still looking. We reread part of Enos yesterday with him and talked about how to pray and get answers to those prayers, especially about how Enos prayed all day and night until his prayer was heard. It was a cool lesson, and he's the kind of investigator who asks a lot of really thought-out questions, so it's really fun. But his biggest problem, I think, is that his wife is kind of skeptical, and we can't really talk to her at all. We're still working on that, but until we can go and teach them together I don't think he'll progress all the way to baptism.

And Noel seems to be one of those guys that just kind of lets us come to visit without really listening much. He's a good guy, but doesn't really participate much in the lessons. The reason we keep going back, though, is for his kids, Karen and Gerson. They are 12 and 16, I think, and in the last week or two have become friends with some of the young men and young women and gone to mutual twice, the second time without anyone inviting them. They've also got permission already to go to church on Sunday. I think they could progress pretty well, and once Noel starts to see that he might pay a little bit closer attention.

So that's how the work has been going lately. It's good to hear that everyone has been working pretty hard there at home, too. And can I just say that the twins are super huge now? It doesn't make any sense to me. And Steven, as well. People are getting tall. Sorry Michael, Mom and Dad. I think you're all the same height. And I'm assuming the rest of you are, as well.

And I'm super jealous that you're going to see Les Miserables tonight. I'll hum some of the songs throughout the day in my jealousy.

And I'll buy an ice cream cone. Lindsay described deliciousness to me, but I can get a giant two-scoop ice cream cone with strawberry cheesecake and banana split flavors for $0.99. That's awesome.