Week 12 in the Mission Office

Has it been nearly three months in the office?  Time does fly.  In fact, David’s been out for 10 months now.  We’re already almost half way!

Pictures this week!  Although it would have been fun to see those videos.  I guess they’re just too big.

This week we learn of the birth certificate challenges, especially when mixed in with what are apparently ZLs not delivering their stuff.  Ah, to be 20 again.  And don’t send  mail via UPS.

Dang it, I feel kind of bad. I had a couple random videos and such that I wanted to send to you all, but I don’t think that there’s any way I’ll be able to on P-Day. They’re like 300MB each. It takes about the full hour and a half just to send 100MB. 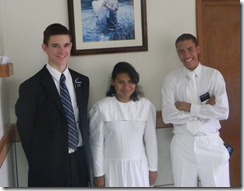 Regardless, I really did upload stuff this time. Some are pictures of Marlenyc, our baptism, and there are a couple other random ones. Like the ones of the little Latin kids playing pogs. The main one, by the way, is part of an investigator family (Diaz) that should be getting ‘tized soon. And there’s a couple with the Vasquez family, who are awesome members that just moved out of our ward. It makes me really sad. They even spoke perfect English.

In the office this week I was kind of busy. There was a multi-zone conference on Monday and Tuesday, so I didn’t even work in the office Monday, which is bad because I had to send three different reports and a letter draft that needed approving to President Lopez. Just a side note, you’ll probably get that letter once it 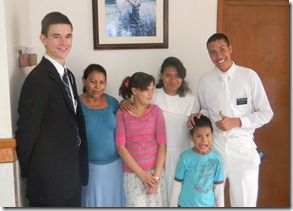 gets approved. It just talks about how you should never, ever use DHL, UPS, or FedEx to ship things to El Salvador. So on Tuesday I had to get all of that together while also getting the emergency backpacks and binders ready for the fifteen new missionaries coming in. And the East mission was bugging me about a birth certificate that they needed. Here’s that story:

To get married, you have to have a birth certificate, which is something that people here don’t ever have on hand. So you have to go to the city council building where they were born, look it up, and buy a copy. I don’t know why they let just anyone take out anyone’s birth certificate for like two bucks, but they do. But occasionally these people are born in other missions’ boundaries. So it’s my job to get that taken care of. Baptism is on the line, and when this week is holy week or whatever, meaning everyone is on vacations, there’s not much room for error with baptisms this week. 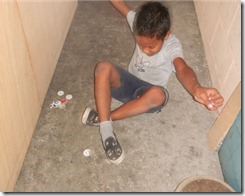 So the East mission had me get a birth certificate from La Labor. I talked to the zone leaders there, and they got it. Monday night I called them and said that I needed the certificate on Tuesday. They said they’d come to the office. In the morning, I called the zone leader and asked him when he was coming in. He said later in the day. When he didn’t show up by noon (with the East mission calling me every half hour to ask about it) I called him. He said that he and his comp decided not to go to the office. Wait, what? This is why zone leaders are frustrating. I kind of yelled at him a tiny bit, and he told me that he’d bring it in later in the day. Repeat the above couple sentences to find out what happened with that. And, I’m not even kidding, the exact same thing happened on Wednesday. We eventually drove over to his area, found him, and forced him to go get it and give it to us. The sad thing is that this is not an uncommon occurrence. For example, On Saturday night I called all the zone leaders to tell them that I needed a report on Monday or Tuesday, depending on when their P-Day was (they were changed to accommodate the multi-zone). I then called them Sunday night and said the same thing, reiterating how important it was. And on Monday night I called the zones with a Tuesday P-Day to remind them a third time. How many reports did I get? One. And three more that were not the reports I asked for. Out of fourteen zones. 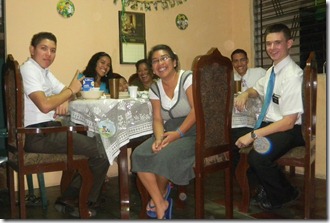 This week was a little bit tough working-wise as well. We lost a lot of investigators and a lot of our dates fell, which is always super discouraging. On Sunday the meeting schedule was changed to 10 instead of 1, so as you can imagine our attendance dropped dramatically. By about 40 people, as it turns out. Which is almost a 30% drop. We did divisions so that we could invite more people to church, and nobody was there. I went to Ana and Marleni (who needed to be confirmed) and neither were there. Maria Caminos didn’t come for some unknown reason, either. Some members were supposed to bring her. Elder González went to the Diaz family and Manuel. Manuel wasn’t home, and he said that Rene Diaz had apparently been drinking a little bit. That’s super not productive if he and his family are going to get baptized. So Sunday hurt.

From there on, it wasn’t too bad. We taught Ana a few more times and she’s progressing, but it is really hard to teach her because her son, Daniel, is crazy. He loves me, though, since I spent like two hours just showing him magic tricks. But as soon as we start teaching he goes crazy. We’ve re-committed the Diaz family, and they’re progressing better. A few of our investigators just kind of had to be dropped, though, for various reasons outside of our control. Like Adreana, whose family is super determined to not let her go to church. They’re super catholic. But we’re moving along. We might even have a few baptisms next week.

The one that’s still super frustrating to me, though, is Manuel Caminos. He just still will not marry Maria. She is super ready, reads the Book of Mormon and Principles of the Gospel, and is just awesome. Manuel, the first time we passed by this week, was smoking. We had a super powerful lesson with them the other day, though, where we really just hammered Manuel with the spirit. And we were really direct, telling him that not getting married is a super serious sin in this case, that he’ll be condemning his family because he won’t let them progress, but that he’ll be even worse off since he’s already been baptized and has the Aaronic Priesthood, and so on. It got super intense because at one point Maria was just talking about how badly she wanted to get married and baptized and go to the temple and so forth. Then we kind of all turned to Manuel and you could just see that he was close to giving in. Eventually, though, he refused again. Maria started crying and had to leave the room. It was one of the most disappointed I think I’ve ever been in someone. But I can at least remind myself that, in the worst case scenario, they’ll all eventually die and be separated, and Maria will have all the necessary ordinances done for her and be just fine. But that’s still kind of an ugly thought. Especially when you throw their three year-old daughter into the equation.

Alright, enough about that. Time for real-world events. I can’t believe, Stacey, that your story actually included gun toting midgets. I am deeply impressed. That’s also a rather intense story. Mom, you quitting your job is kind of sad. But regardless, I’m sure we’ll all keep in touch with your friends there. Doctors trips with Michael and Steven should be a hoot. The choir tour sounds like it was great fun. I remember mine was awesome. I haven’t gotten a chance to watch the video or hear the clip that Dad sent, but I will when I head in to the office. And I’m glad Lindsay and Reese had a good weekend at grandmas. I am also a little bit sad that I will not see her or Darcy or James until they’re a little bit growed up, but that’s life. I plan on finishing this first, and then I can start worrying about other things.

I think I have been rapidly running out of things to say, so I will bring this to a close. I appreciate as always your support. It was especially nice to hear that Mom was forcing people to write me. It’s kind of a type and shadow of that whole “Satan’s Plan” idea, but I’m not complaining.

I love you all! Have a great week!
Elder David Arrington