It's all about David

This is the Arrington Family blog for missionaries. For now, this is just about David (isn't it always about David?), but since we expect others to go on missions including Michael and Steven, and eventually Regan and me, we might as well have a common place for the missionary updates.


As you may have heard, David is called to serve in the El Salvador San Salvador West/Belize mission entering the MTC on June 16th.
The countdown to the mission has been stressful. Regan has gone over his packing list dozens of times. Maybe hundreds of times. We've purchased just about everything he could need and then some. This week it was all spread out in the bonus room so Regan could, well, check out the checklist. Finally everything was there, except his watch. We got him a new watch for Christmas just for his mission. He had it at school, but now it's gone. More stress. 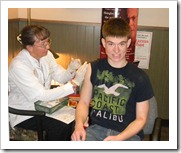 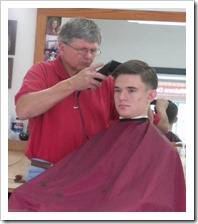 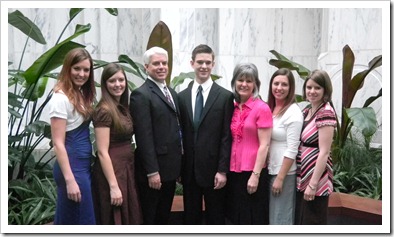 This last Monday night we decided to go to an El Salvadorian restaurant to eat dinner. We drove all the way over to SE Portland just to find out the restaurant was closed. We went to Applebee's instead. Everyone was there. Well, Regan and I, Michael, Steven, David, and of course Sarah who has been spending a lot of time at our home lately--at least when David is there. Typically, David had the shrimp parmesan steak, of which he at about a fourth. Missionaries have a reputation for being big eaters. David isn't one of those. He normally has more boxed-up food in the fridge than anyone. My task: To get to the leftover shrimp steak before David does.
On Tuesday Regan and David spent the day mostly packing. Reviewing the list, and packing. David took his final stats test (not a moment too soon) and went to lunch with a friend. The shrimp steak is still available! As we approached dinnertime, the bags were packed, but David still needed to watch 90 minutes of MTC preview video before being set apart. We started that 2-hours before the scheduled appt with the Stake President. 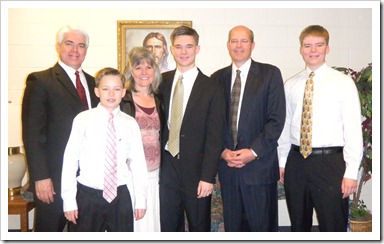 The setting apart was a wonderful event. In addition to President Fotheringham, the same crew that was at Applebee's was there to witness. 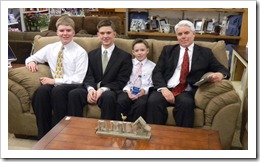 Fred Meyer to buy David another watch. We never found the other one. When we got home, David and I walked over to Adam's house to say goodbye, and then back home. There, David asked me to give him a father's blessing. I don't know that I can express what that meant to me. He had just received the most beautiful blessing from President Fotheringham, but still David wanted a blessing from his dad. I think about all the responsibilities over all the years to demonstrate faith, diligence, uprightness, and a willingness to use the Priesthood, and here was another opportunity.

What a great expression of love. Just his asking was more of an expression of love than anything. I gave him a blessing. I hope it will not be the last.
We all got to bed a little after 11:00. Regan had to review the list and fuss with the suitcases for a few more minutes before we all went to sleep.
The alarm went off at 3:45am. Regan and I got up and dressed then woke David up. This is the day. After reviewing the packing list a couple more times and packing the final items into his suitcases, we had prayer together then packed up the car and left. 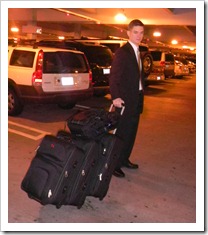 Upon arriving at the airport, things got more stressful, not less. It turns out that David's flight was cancelled.

Figures. He was scheduled on the 7:15am flight, but it wasn't going anywhere. Delta Airlines rebooked him on the delayed 6:00am flight that was now schedule to depart at 10:00am. 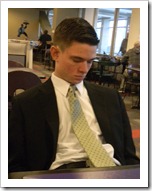 We sat around the airport for something like three hours doing absolutely nothing until 9:00. Finally at 9:00 it was time.

We walked David to security, gave him hugs, and gave him hugs again. And again. Then he was off. We watched him go through security and then head to the gate. With that, he was gone. 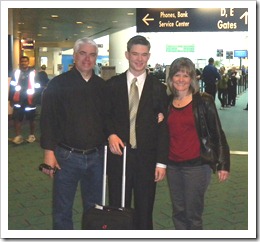 But the story doesn't end there. On the way home, Michael checked the flight status. David's flight was now delayed until 11:00. Since he didn't have a cell phone , we couldn't contact him and he couldn't contact us, so we just went home. Regan went to work, the boys went to school. I continued to track the status of the flight until it finally left at 11:25am. David was scheduled to be in the MTC by 12:45, but by my calculations, it would be at least 3:30 or 4:00 before he arrived. There seemed to be nothing I could do about it, so I went to the fridge, pulled out David's shrimp parmesan steak and heated it up. Yum. 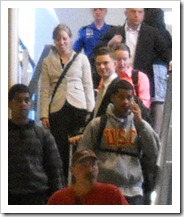 Emily, Dave and their kids patiently waited then picked David up at the airport. David grabbed his luggage, and while hooking them together, discovered his watch--the original one he lost--in the pocket of the suitcase. Mystery solved! Of course now he has two watches....Regan says that means he has more time. Emily took the obligatory MTC photo shots of David and then dropped him off officially. Emily's daughter's seemed to sense the impact of his departure and were sad to see him go. 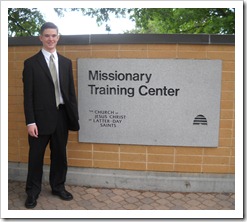 Now he is somewhere in the depths of the MTC. We've not heard anything yet from him, and since we really don't know the communications process, we're not sure how long it will be before we hear. At this point, I can assume that no news is good news, right? We're confident he's doing great!
In the future, I hope to mostly post reports from David as we hear things. I expect that it won't be my writing mostly, it will be his. That way, we'll all get to keep up on what he's doing and the progress he's making. It's great to have a missionary in the field!
Posted by Ed Arrington